Hey Inslee:  I Agree, Trump Should Release His Tax Returns…8 Years After Obama Unseals His Records 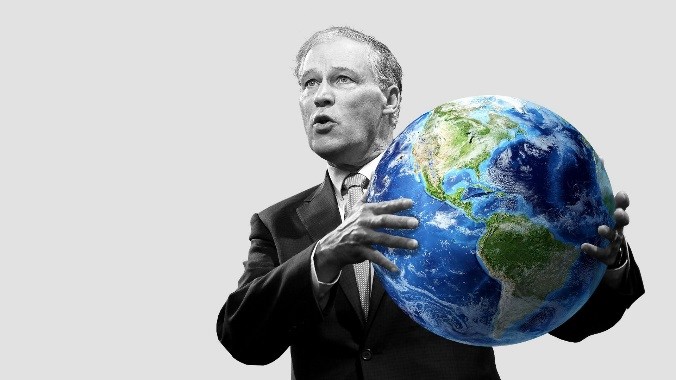 Hey Inslee:  I Agree, Trump Should Release His Tax Returns…8 Years After Obama Unseals His Records

Stepping out in his Fox News introduction to his Presidential candidacy, Washington State Governor Jay Inslee just had to attack President Trump with demanding that he release his tax returns.

Then he launched into his big campaign issue of running on the Whoopty doo climate change scare.  Governor, if you stay outside long enough, you can bet that the climate will change.  Actually, I wish you would stay outside for a very long time and get soaked to the bone and stay away from communicating with Washington’s politicians and citizens who you are damaging with all your liberal nonsense.

Oh, haven’t you heard that this year so far Colorado has already had twice as much snow as the last two years?  And artic icecaps are not melting they are growing!  So much for the old mantra of global warming.

And your drive for more ‘renewable energy’ touting the clean aspect of wind and solar:  Who’s speaking for the millions of birds killed by both technologies, the unsustainability of power from both being totally dependent on weather, and the irrefutability of inefficiency since both have forever been so reliant on subsidies.  Not even too mention, the blight on our landscape.  These technologies have truly been more about an incredible opportunity for capitalist ventures being sold by politically linked professional lobbyists promoted by cronies in the media.

We get it that you believe we should follow all the scare tactic edicts of the globalist run United Nations no matter how foolish and damaging they would be to our nation’s health and particularly our sovereignty.

Governor Inslee, I get it that like all other Democrat candidates running for the Presidency that you as well, having no real constitutionally minded issues to run on and have to rely on campaign directions from your party’s puppeteers at the UN.

I hope you waste a lot of your own money running around the country trying to project importance with your empty tool chest of anything meaningful or important to America’s authentic needs so it will take time away from your continued damaging of the citizens of Washington State with your sorry brand of socialism.

As I see it from over here in North Idaho, you are not deep state pond scum.  You are not even close to the pond.  You belong in California or Venezuela with your nonsensical politics.

Be comforted in knowing that there are some politicians I have a lessor opinion of than your kind transmitting blatantly insane Democrat schemes and now even blatant socialism.  Those people reside in the Republican Party.  They would be the RINOs that betray the best platform in politics, belonging to the GOP, and their oaths to our Constitution.

Nothing hurts more than betrayal. America direly needs real ‘platform republicans’ to step up and shut you crazies down.