Are Democrats Forfeiting the 2020 Election? 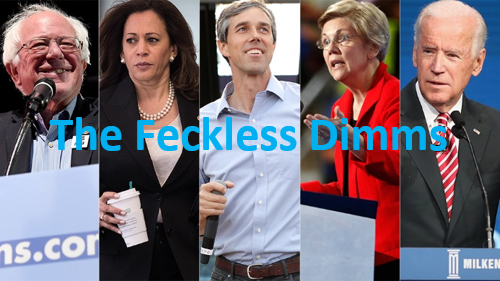 Are Democrats Forfeiting the 2020 Election?

I won’t have much to say about any of these marginal guys going forward, unless, of course, one of them manages to become a serious candidate.  The most likely to emerge in that role is Buttigieg, who appears to be pleasant, intelligent, and reasonable, which sets him apart from the nasty C:\Users\Rich\Desktop\www\inland northwest report\Feckless Party.png, stupid, irrational wannabes in the Democratic field.  Time will tell.

In the future, I may occasionally comment on the comedic exploits of body-building champ Kirsten Gillibrand, beer-guzzling Lizahontas Warren, Sparty Booker, and unwashed Kamala Harris, but they’ve already made such asses of themselves that they’re on the verge of political extinction.  They have even less of a chance of winning the Democratic nomination now than when I first wrote about them in my February 13 article, and they were on my no-chance list even then.  Trust me, no matter what the MSM tells you, none of these buffoons has a chance of becoming the Democratic nominee.

Once they’ve been vanquished, the only one I will miss is Lyin’ Lizahontas.  I have to admit that I find her goofy machinations to be quite entertaining.  Her complete lack of self-awareness is nothing short of hilarious.  (“Excuse me for a second while I grab a beer.”)

Even though it’s still very early in the nominating process, I’m also on the verge of moving Bonehead Beto into the no-chance category.  I have a feeling that murder fantasies, eating dirt, and standing on tables and waving one’s arms doesn’t have a great deal of appeal beyond CNN, MSNBC, and Hollywood, though I admit Bonehead’s skateboard stage entrances are intellectually stimulating.

If Beto is destined to return to his obscure life in El Paso, and if Michael Bloomberg’s  declaration that he won’t run for president is for real, all the Dirty Dems have left as serious candidates are Joe Biden, Uncle Bernie, and possibly Howard Schultz.  (Schultz has not officially announced his candidacy, but he’s making a lot of noise about a third-party run.)

Being an old, white guy apparently appeals to a majority of Democrats, notwithstanding their braying about old, white, and male being the ultimate evil combination.  I originally thought Biden might be a formidable opponent for Trump, but the way he’s been performing of late, I’m starting to wonder if he’ll even make it through the early primaries.

The death knell for Biden would be if he tried to pander to the Dirty Dems’ lunatic base by asking Mad Mamma Obama’s lookalike, Stacy Abrams, to be his running mate.  The backlash would be so swift and so nasty that within a matter of days he would either have to drop Abrams from the ticket — which could result in more fake race riots (yawn) — or be prepared to get bludgeoned in the primaries.

Biden biggest problem, however, is his mysterious China connection.  Shortly after he and his son Hunter visited China in 2013, Hunter closed a deal with Bank of China that netted his private equity firm, Rosemont Seneca Partners LLC., a tidy $1.5 billion.  A presidential run would almost certainly call attention to this foul-smelling deal and could result in Joe’s ending up in the Big House rather than the White House.

I’m not even addressing Biden’s sexual-harassment problems, because they’re too nauseating to even think about.  But if he is forced out of the race because of his sex and crime issues that would leave Uncle Bernie in the driver’s seat.  Good for commies worldwide, but not so good for rank-and-file Democrats.

Let’s be blunt about this:  Grungy Bernie is not the funny old clown that many in the media portray him to be.  The truth is that he’s a nasty, hypocritical, Radical Left revolutionary cut in the mold of Lenin, Trotsky, Castro, and Che.  Meaning that he actually believes the tired, old revolutionary rubbish that has resulted in poverty, misery, and death for tens of millions of people worldwide.

Of course, like all commie leaders, Bernie also believes he is exempted from the rules he would like to impose on the rest of us, so don’t bug him about his penchant for flying first class, owning three homes, or his $2 million net worth.  Bernie’s motto is, “Do as I say, not as I do.  Oh, and by the way, everyone knows that Donald Trump is a racist, which is a good enough reason to vote for me.”

The bottom line to Bernie is that, to the horror of establishment Democrats who thought they were rid of him when they screwed him out of the 2016 nomination, he could end up winning the Democratic nomination by default.  Literally, he could end up having no one to run against.

That, however, is where it would end.  Bernie would have zero chance of winning the presidency, but he could very well succeed in shattering beyond repair what’s left of the Democratic Party.  Talk about poetic justice.

Which means that if I’m right about Bonehead Beto having no chance, and if Bloomberg stays out of the race, the Democrats could, for all practical purposes, be without a legitimate presidential candidate in 2020.

But there’s an asterisk to this.  Howard Schultz, who already is despised by deranged Dems because he’s talking more like a liberal Republican than a crazed Democrat, could actually be a worthy challenger for Trump.  Though he hasn’t yet announced his candidacy, if he does run as an independent or third-party candidate, the Democrats might have no other choice but to offer him the Democratic nomination if it looks like he’s going to take a significant number of votes from them — or, worse, win as an independent or third-party candidate.

The one caveat for Schultz is that in order for him to have a chance against Trump, he would have to avoid the over-the-top crazy stuff that the Democrats are pushing.  But it’s a Catch-22, because distancing himself from the crazy stuff would likely result in the Radical Left’s refusing to pull the lever for him on Election Day.

Of course, both the coronation of the official Democratic presidential candidate and the general election are a long way off, and a lot could change between now and then.  But at this point in time, it appears to me that the Democrats are on the verge of forfeiting the 2020 election.  If the Schultz option doesn’t materialize, and if Bloomberg sits it out, I don’t see where they have a legitimate candidate.

There’s no sweeter way to win than by default.

ROBERT RINGER is a New York Times #1 bestselling author who has appeared on numerous national radio and television shows, including The Tonight Show, Today, The Dennis Miller Show, Good Morning America, ABC Nightline, The Charlie Rose Show, as well as Fox News and Fox Business. To sign up for a free subscription to his mind-expanding daily insights, visit www.robertringer.com.