Democrats’ Deconstruction of the Constitution 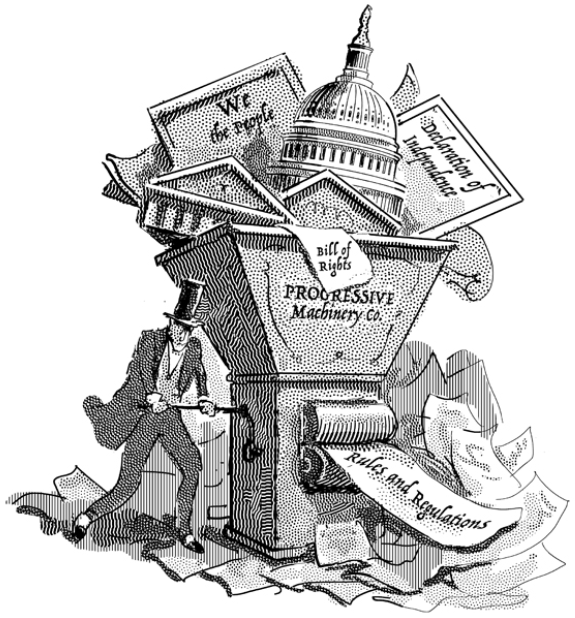 Democrats’ Deconstruction of the Constitution

Largely in service to their factious partisan agenda, the Democrats are promoting proposals that strip all the features our constitutional government intended to prolong the sovereignty of the people of the United States and prevent the imposition of any form of tyranny over them. They pretend that the features they target are artifacts of archaic anti-democratic prejudices. In fact, their agenda is, in every respect, a tool of regression. They mean to restore the rule that “might makes right” – which is what Marx’s dialectical and materialistic view of history comes down to in the end.

Like terrorists sabotaging a nuclear reactor, they seek to remove constitutional features that are, as it were, “control rods” and other safeguards of our self-government. This will allow them to consolidate a mass of power sufficient to explode our constitutional self-government. Like the Marxist demagogues they more and more openly declare themselves to be, this consolidation of power is truly their paramount aim. Every other aspect of their agenda is superstructure, built up and used to support and promote that aim, so that the United States ends in being a totalitarian, one-party dictatorship.

At the moment, they are getting away with this assault because generations of American citizens have lately come of age under the tutelage of people who hate America’s founders for devising a system that poses so many obstacles to their ideological ambition. They are aided and abetted by Americans deeply susceptible to a key tactic the enemies of our self-government deploy. A strain of ornery individualism often led people to leave their more settled homes elsewhere and voyage to America. This contributed to a preoccupation with individual rights. As God would have it, however, most Americans who settled in America brought some kind of Christian faith with them.

Christianity operates at the omnipresent conjuncture of God and His Creation. God provides and sustains the whole, but also absolutely knows and cares for every part of it. This includes especially the individuals He made to reflect (act like and think upon) His presence in all things, including the One they altogether comprise. The assumption of God’s presence naturally engenders a sense of common responsibility, felt by each and shared by all. It was the cause of right that American patriots fought and died to uphold during our Revolutionary War. As proven in the aftermath, they were determined to make that cause – and the individual, yet wholesome, perspective of God it reflected – the ground and reason for the success of America’s self-government.

Because of their reverence for God, people of the founding generation were not simply partisans of the power of the people. They understood that abuses of their power, brought on by self-serving would-be tyrants, almost uniformly transform unbounded “democracies” into ruthless tyrannies. Using the opportunity of the people’s favor, they enlisted followers either created by or dependent on their largesse. Before long, their coterie bred a ruling group that became the arbiter of ambition’s access to power. As long as the people helped to maintain their power, they flattered and indulged them. But they also concentrated on sowing and exploiting division among them, so that if and when the ruling group moved against one element of the people, the others, moved by fear or selfish interest, would fail to come to the aid of those targeted.

This should sound familiar to anyone who has observed, with any care, the elitist factions’ deployment of “identity politics.” Having already induced black American politicos to suborn the extermination of new generations, now they are preparing leaders in Christian denominations to assume the same posture. As a nation, the “American people” is disappearing in a welter of passionately individual conflicting selves. We are utterly losing sight of the union we are supposed to be forging.

The attack against the Second Amendment is a telling case in point. The amendment speaks of “the right of the people to keep and bearing arms.” Yet leaders on all sides have been mostly content to tolerate judicial judgments and laws that read as if the amendment speaks of a right of “persons.” This makes a telling difference when it comes to understanding the amendment’s reference to “a well-regulated militia” and its necessary role in preserving “the security of a free state.” The amendments that follow the Second are well position to remind us that regular military establishments have a tendency to become the tool of would-be tyrants.

The militia was an armed force, subject to appropriate regulation. But its very existence depends on each individual’s sense of responsibility toward the safety of the whole people. Once people are excluded from acquiring the basic skill required to meet that responsibility, it’s absurd to believe they will make what plainly appears to be an irrational decision to do so.

Every proposal the Democrats are now promoting to deconstruct the Constitution works, in some way, to destroy the People’s sense of themselves as such, as well as the practical ground for believing they can defend their sovereign authority against the age-old forces that have invariably seduced and destroyed unconstrained democratic regimes. More on this in next week’s column.