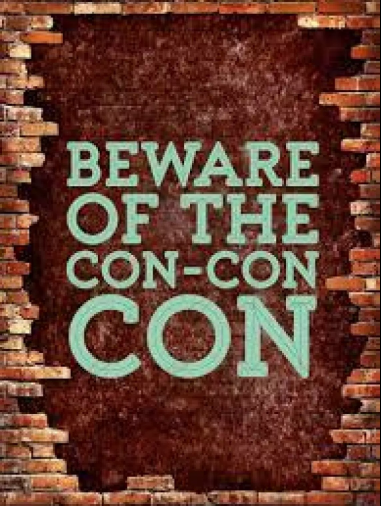 The three most important points to understand about the constant drumbeat by well-paid pitchmen for a ‘Convention of the States’ or any other Article V Convention are:

Why should we believe that Congress or citizens would magically follow new laws any more than present laws? Few state legislators seem to realize that our nation’s disastrous budget deficits had accrued out of disregard for constitutional restraints in the first place. Because had government been held only to its constitutionally authorized activities, no budget crisis could have developed.  See: ‘The Solution Is the Constitution, Not Article V’

Much can be accomplished by following the Constitution, enforcing laws and by Nullifying unconstitutional laws.

Former Chief Justice of the Supreme Court Warren Berger issued a stern warning: “Nobody tells a Con-Con what to do. Its powers to propose Amendments are unlimited. In light of this information, does America, do you, really want to risk a convention?  Whatever gain might be hoped for from a new Constitutional Convention could not be worth the risk involved. A new convention could plunge our Nation into constitutional confusion and confrontation at every turn, with no assurance that focus would be on the subject needing attention. I have discouraged the idea of a Constitutional Convention, and I am glad to see states rescinding their previous resolutions requesting a convention.”

No. They would send convention results to hand-selected delegates at Ratifying Conventions who will be like-minded, baggage carrying colleagues who would be chumps in the world of constitutional patriotism.  Helpful substantiation for my point is that our last Amendment (Amendment 27) took 202 yrs, 7 months and 12 days to ratify.  Most amendments took well over a year to several years to ratify.

Other points to ponder:

Legislators should strongly question where the funding for all these well healed lobbyists and their very expensive promotional efforts have been coming from to push this with such dogged urgency for years.  Just last year millions were spent by them in 19 states where we were fortunate in beating a total of 29 various applications.  They currently have 28 states and only need 6 more for a total of 34 for a Constitution Convention call.   See short video: Rep. Moon Exposes Fraud by Con-Con Peddlers

Application rescissions never time out, they are intentionally rescinded once states come to their senses. Idaho has had 6 applications in our past going all the way back to 1910. You have to ask yourself why so many times did our states awaken and rescind.  I think Americans are smarter than they often are given credit for and have just temporarily given into the spell cast by poker-faced presentations which have been fueled by our being fed up with how poorly our system has performed from not following the Constitution and the hunger to right things with the wish of a quick fix.  In other words, the Convention pushers are appealing to an attitude that’s nearly saying ‘We have to do something, even if it’s wrong!’

Nothing is more dangerous to our Republic than the opening of such a convention because it can literally take down our country as we’ve known it almost overnight. There are very clandestine and powerful forces behind it. We have problems today which are being exploited to hasten such a magical fix that can alter or even literally abolish our sacred Constitution.

The money behind it all:  The Con-Con con today, in our political climate is being overseen by unelected, unaccountable powerful global elitist who know what’s best about everything for everybody.  They will be directly or indirectly influencing the attendees to be sure the results of such a convention would be fatal to our republic.  That is why they are spending all the millions pushing this.

Sure things are a mess, because elected officials have gotten away from what brought us and what we are really about: A nation of limited national government, with the states and the people shouldering most responsibilities themselves. We are not supposed to be socialists and that’s where our majority of legislators have been taking us unintentionally or on purpose.  They must ‘Patriot Up,’ do the hard work of reversing much that is present by honoring  their oaths to the Constitution and our state Constitutions to save America for their grandchildren because America is rapidly being dissolved by them currently.

In summation, we don’t have a Constitution problem. We have an adherence problem. The ‘fix’ is following law, law enforcement, prosecution and nullification.   Nullification is the real serious effort that would surely work with bad legislation affecting our states and our citizens and needs being pursued.

See:  Stop a Con-Con , Why Would “Conservatives” Want a Constitutional Convention? and What a Convention of the States will NOT do!