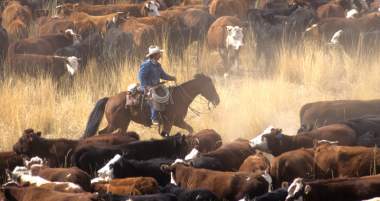 “The likely impact of the USMCA [United States, Mexico, and Canada Agreement, which the Trump Administration is pushing to replace NAFTA] on the U.S. cattle industry will be substantial, and will be substantially negative,” predicted Bill Bullard of the R-CALF USA.

R-CALF USA filed its final submission to the U.S. International Trade Commission (ITC) this week, in an effort to ensure that the ITC’s report to President Trump and Congress will accurately describe the likely impacts of USMCA on the American cattle industry. The report of the ITC is required under a 2015 law, assessing the likely impact of the USMCA on the U.S. economy in general, and on specific sectors of the economy in particular.

While Trump campaigned vigorously against NAFTA during his successful 2016 presidential run, R-CALF contends that “the USMCA adopts the same provisions in the original North American Free Trade Agreement (NAFTA) regarding cattle and beef trade.”

And those NAFTA provisions were “disastrous to independent cattle producers because they empowered multinational beef packers to indiscriminately displace domestic cattle and beef production with cheaper, undifferentiated imports of both cattle and beef,” R-CALF argued. “This has substantially weakened the U.S. live cattle supply chain and infrastructure, which has substantially reduced competition for the industry and is contributing to the hollowing out of America’s rural communities.”

Rather than just make general statements, R-CALF cited very specific ways that the NAFTA agreement has harmed the U.S. cattle industry, noting that these provisions are continued under the proposed USMCA. “Twenty percent of all U.S. beef cattle operations exited the industry from 1994 to 2012,” the group said, citing the latest available census data.

The U.S. beef cow herd has declined to the lowest level in seven decades, with nearly three million head less than in 1994. Forty-eight percent of U.S. beef packing plants have left the industry since 1995.

Before NAFTA, the share of U.S. cattle producers of every consumer beef dollar was 56 percent — by 2017 it had declined to just 45 percent.

In short, R-CALF lamented, “NAFTA has displaced domestic beef and cattle production.” USMCA promises a continuation of the same policies of NAFTA.

“In conclusion,” Bullard explained, “because NAFTA incorporates NAFTA’s fundamentally flawed provisions, it should be expected that the USMCA will now cause the elimination of the critical mass of competitive marketing channels and industry infrastructure needed to sustain an independent family farm and ranch system of cattle production in the United States. Thus, the new USMCA will accelerate the destruction of the U.S. cattle industry as we know it today.” (Emphasis added.)

The only years that cow/calf returns per bred cow exceeded the NAFTA period’s $37 average [it was $50 during the seven years prior to NAFTA] was during the time that the U.S. banned Canadian cattle imports, in 2004-2005, and after the 2009 implementation of the country-of-origin labeling (COOL) law. Unfortunately, under pressure from the World Trade Organization (WTO), the U.S. Congress meekly repealed COOL in December 2015 for beef and pork products.

With this repeal of COOL, consumers can no longer know from what country their beef or their pork is coming. One of the requirements for “pure competition” is that a consumer be reasonably well-informed about the product for sale. Considering that the average American, given a choice, would be more likely to buy beef from western Oklahoma than western Canada, it is clear that the repeal of COOL for beef and pork is detrimental to the American beef and pork producers.

Bullard, when asked about COOL by The New American, explained that the argument made by those who lobbied for Congress to terminate COOL for beef and pork is that beef from foreign countries “meets the same health and safety standards” as U.S. beef. But, Bullard said, “This notion that beef is beef is false.”

Bullard offered as an example of why it is false. He said that U.S. cattle producers are required to obtain veterinarian certification before administering antibiotics, but this does not apply to any other nation. He said this is not the only difference, but rather that there are a “host of differences” between the requirements placed on American beef producers and their foreign competitors.

Finally, if the United States is going to remain a sovereign nation, Congress should make appropriate regulations on interstate commerce and foreign imports, not the WTO, and not agreements such as NAFTA, USMCA, and the like. Article I, Section 8 of the U.S. Constitution gives to Congress the power “to regulate commerce with foreign nations,” and no provision is made in the Constitution for Congress to delegate that power to the executive branch, or to any foreign body, such as the UN, the WTO, or USMCA.

Hopefully, Congress will reassert itself and kill USMCA — the latest assault upon our national sovereignty. In other words, Put America First.