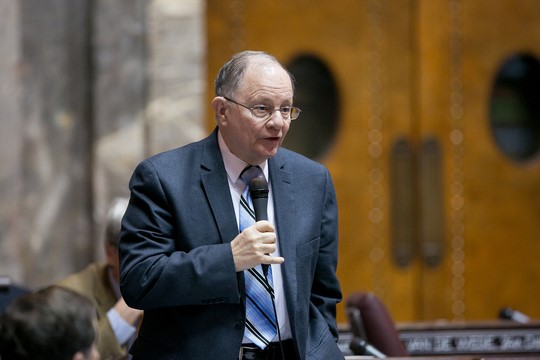 This week our legislative session enters the home stretch. What’s clear is that the debate of the next few weeks will be one of the most unusual ever to play out under the Capitol dome.  The majority party is determined to enact major tax increases, whether we need them or not – and pretty much all the evidence indicates we don’t.

Seldom has the state been in such a good financial position. Our economy is growing by leaps and bounds. So are the state’s tax collections — over the next two years, we will collect $5 billion more than at present. That’s enough to continue doing everything the state has been doing, meet all legal obligations, and still have a couple of billion dollars left over.

But our urban Puget Sound colleagues want still more. The House majority this week proposed a $53 billion spending plan for the next two years. To use round numbers, that’s a couple billion dollars more than we expect to take in. To pay for it, they propose massive tax increases that would have devastating effect on our economy and our citizens. These proposals include steep hikes in business taxes and a brand-new income tax, setting the state up for a big expansion of government.

The majority party in the Senate is expected to unveil a similar proposal on Friday. Add these taxes to the steep increases in energy costs imposed by other legislation this year and we have a recipe for economic stagnation. This will be the battle of the next few weeks at the state Capitol, right up through our scheduled adjournment April 28. I’ll tell you more about it in this week’s newsletter. If you have a comment or concern about the direction this year’s Legislature is taking, this is the time to make your opinions known. Please do not hesitate to contact me or my staff at our office in Olympia. 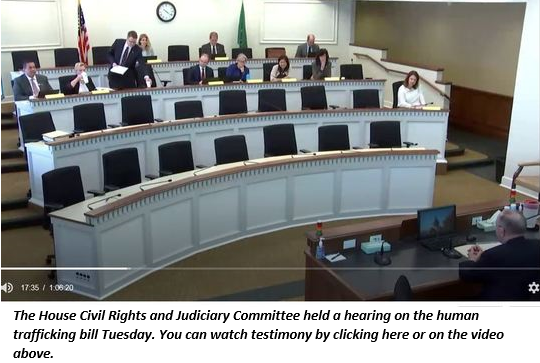 Tougher sentences for impaired drivers. The Senate Law and Justice Committee has revived a bill I have sponsored that would send more repeat DUI offenders to prison. The bill extends the look-back in DUI cases, allowing courts to consider convictions within the last 15 years when determining sentence. Current law allows only 10. This would make it easier to convict repeat impaired drivers of felonies on their fourth conviction. SB 5299 failed to receive a vote in the Senate before a March 13 deadline, and was technically considered “dead.” However, the committee amended another bill dealing with DUI, HB 1504, to include the longer look-back provision. The committee passed the bill Thursday morning and sent it on to the Ways and Means Committee for further consideration.

Cracking down on human trafficking. A measure I have sponsored that would make it easier for prosecutors to obtain convictions in human trafficking cases involving children is due for a vote today in the House Civil Rights and Judiciary Committee. SB 5885 would create an exemption to the state’s “hearsay” rule for children under 16 for certain sex offenses. This would allow courts to consider statements made outside of court proceedings a courtesy that would reduce trauma for victims of this most reprehensible crime.

Organ transplants for the disabled. A bill that would prohibit discrimination against the disabled for organ transplants cleared the House Health Care and Wellness Committee Wednesday. I sponsored SB 5405 after learning of several high-profile cases in other states in which organ transplants have been denied because the patient is developmentally disabled. The bill would prohibit medical providers from using disability as the sole reason for denial. Although the federal Americans With Disabilities Act also prohibits discrimination, its prohibition is broad and general, and several states have passed bills like this one to ensure discrimination does not occur.

What do you think of the budget debate?

This week we’re asking your opinion on the budget debate before this year’s Legislature. To participate in this online survey, click here or on the question below. We will provide results in a future newsletter. 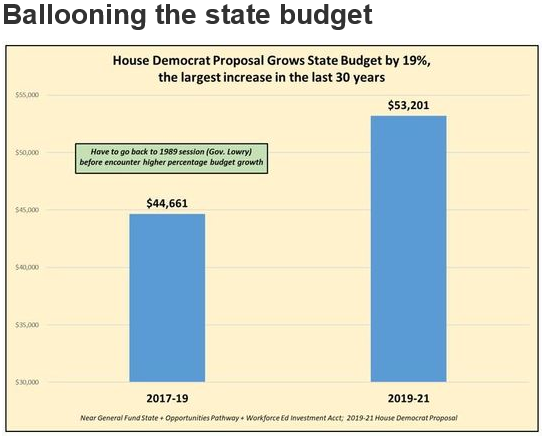 House proposal would increase state spending 19 percent — and assumes the increase can be sustained in the future.

We’re used to hearing proposals for tax increases from our urban Western Washington colleagues. We hear them every year, come rain or come shine, no matter what shape our economy is in or what promises were made during the preceding election season. What is striking about the proposal made by the House this year is its size — $2.8 billion in new taxes every two years when fully implemented, the biggest tax increase in the history of the state. Equally perplexing is the fact that there is no emergency, no costly court decision, or any other external cause for us to increase spending to this degree. This effort to raise taxes is not about sustaining government, but rather about expanding it, and expanding it substantially.

Of the $5 billion in new money we expect to receive, a big chunk is already spoken for mostly by the overhaul of our school-financing system we approved two years ago. But that leaves about $2 billion we can use for new programs, tax cuts or anything else we might want to do. We can raise even more if we enact a number of efficiency measures identified by our budget staff as much as $1.5 billion. That’s a lot of money. As Rep. Drew Stokesbary, R-Auburn, told the Seattle Times this week, there’s plenty of money available for new priorities: You can easily get to $3 billion by snapping your fingers

In an editorial last week, the Walla Walla Union-Bulletin observed that the astounding run-up in state revenue has prompted state lawmakers to want to spend, spend, spend raise taxes and spend some more. This makes no sense. They said it, we didn’t.

How much is enough?

This is one of the most astounding rebounds the state has ever seen. It is proof of our success, during five years of Republican control of the Senate, in holding the line on taxes and allowing our economy to grow without interference. We wouldn’t be where we are today if we had enacted some of those heavy-handed proposals for tax increases we heard six years ago. 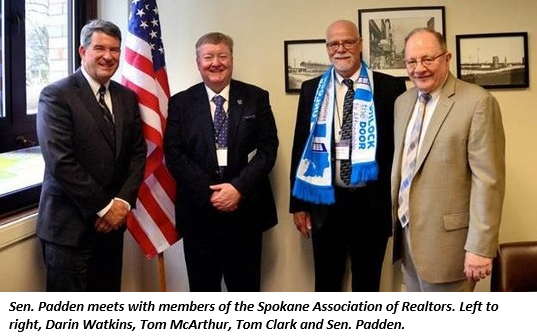