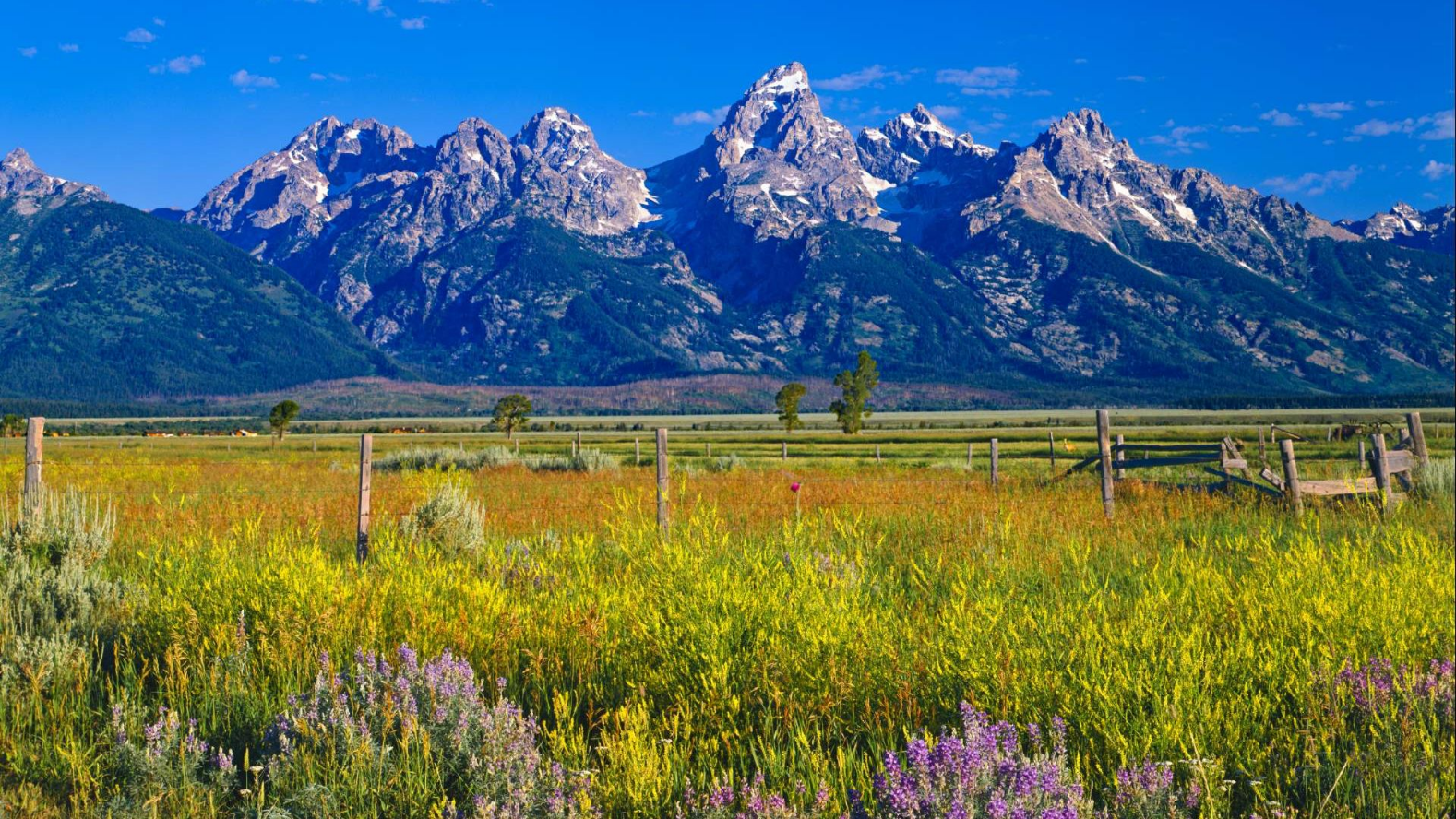 The Northern Rockies Ecosystem Protection Act (NREP) has been reintroduced by a New York representative for the seventh time in Congress, and has been referred to the Natural Resources Committee.  This bill, H.R. 1321, is another 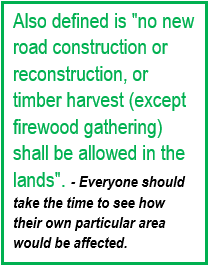 attempt at taking more land away from Idaho citizens for use and designating it as wilderness, wild and scenic rivers, biological connecting corridors, and for other purposes.  Claiming that “wildlife treasures of the Northern Rockies are of international significance”, the standard environmental group mantra is given that “fragmentation” of wildlife occurs due to roads, harvesting, and mining, all horse pucky.  No international significance exists when it comes to Idaho land, it belongs to us.

In the bill text, land is divided up into five ecosystems but the bill has nothing to do with ecosystem protection, it is about taking land.  Each ecosystem includes Idaho national forests, and all are impacted.  Affected areas incorporate land and creeks into currently existing designated wilderness areas and national forests, designate new wilderness areas into what is called the “National Wilderness Preservation System”, take land for “biological connecting corridors”, all of the areas being too exhaustive to list here.  Also defined is “no new road construction or reconstruction, or timber harvest (except firewood gathering) shall be allowed in the lands”.  Everyone should take the time to see how their own particular area would be affected. 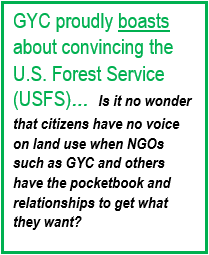 One non-governmental organization (NGO) that has put much effort into increasing federally protected land is the Greater Yellowstone Coalition (GYC), which covers the Greater Yellowstone Ecosystem and Greater Salmon/Selway Ecosystem, both listed in the bill.  GYC is out of Bozeman, Montana, but is also registered in Idaho.  Kathy Rinaldi is the Idaho Conservation Coordinator for GYC, and Allison Michalski is the Idaho Conservation Associate.  Their focus is “protecting” lands in Idaho from eastern Idaho through the Salmon area.  Areas they focus on are included in the bill such as the Custer Gallatin National Forest, and water protection.

In the first 10/1/16-9/30/17′ tax return posted below, with a net balance of 10,813,967 dollars, the GYC spent $118,957 in “direct lobbying” to influence a legislative body.  $18,788 was spent on “grassroots” lobbying, which is an indirect way of influencing legislative bodies through their members.  Another fact found in their tax return is the donation of $27,500 to the National Wildlife Federation, Idaho being an affiliate, for a “grazing allotment buyout”, land that will most likely never be used again.

GYC proudly boasts about convincing the U.S. Forest Service (USFS) to protect Grizzly habitat while partnering with them on other issues, shutting down sheep grazing, and again buying out grazing allotments.  Is it no wonder that citizens have no voice on land use when NGOs such as GYC and others have the pocketbook and relationships to get what they want?  Giving money to the USFS (pg 30) is just one way as they also partner with Idaho Fish & Game (IDFG), having even been on the “core team” for the development of the State Wildlife Action Plan (Rinaldi, page xii). 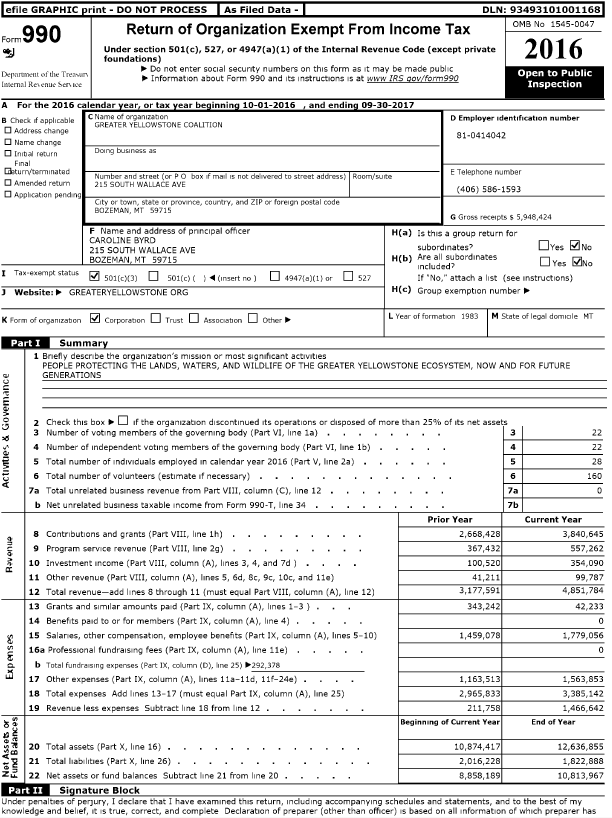 For an unknown reason, other than a request for an extension on tax filing, the GYC website lists a different tax form for the same year.  In this form, lobbying expenses for the same period came to $116,300 in a payment made to a Washington D.C. lobbying firm, Forbes-Tate Partners.  Given the drive for protecting land, did the GYC lobbyist have anything to do with the reintroduction of NREP or the recently signed S. 47?

In the tax forms, GYC specifically states one accomplishment as “permanently protecting Yellowstone’s northern gateway from two proposed gold mines”, that was in 2017.  GYC took credit for the passage of the 2019 Yellowstone Gateway Protection Act that was included in S. 47.  President Trump just signed this bill, effectively endorsing the GYC goal of shutting down all gold mining activity north of Yellowstone Park.  Do they hold the same lobbying power to take thousands of acres of land for wilderness through NREP?  Other accomplishments listed in the tax form, “conserving public lands…in the Gallatin Range…and…High Divide”, and new protections on BLM lands.  Water is another focus for “permanent” protection.  All of these are addressed in the NREP bill.

Representatives Russ Fulcher and Mike Simpson are both members of the Congressional Western Conference (CWC), although Rep. Simpson is known for his alignment with NGOs and support for land grab legislation.  CWC has a multitude of issues that it covers, one of which is federal land management, claiming too much land is controlled by the federal government and the “checkerboard” of land ownership should be streamlined.  Yet at the same time, this group applauded the passage of S.47, which establishes more national monuments, designates more wilderness areas and wild and scenic rivers, restores the Land and Water Conservation Fund which is used for land purchases by the federal government, and provides money to NGOs for continuation of their agenda.  Taking more land is being justified by increased access to public land use “unless specifically designated otherwise”.  Should the CWC be trusted to oppose NREP, or have GYC lobbyists and others successfully infiltrated, or bought, the caucus?  NGOs have become so financially powerful they are now buying logging industries.

From all accounts, it is clear that the federal government has only one intention in mind, take more land and restrict use, leaving citizens they represent out, instead building and funding NGO partnerships to accomplish their goals.  NREP is just another example of how we are being robbed of our land.  Let your representatives, CWC, and the House Committee on Natural Resources know that you oppose more land being taken from us and their support of NGO agendas.