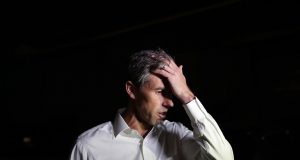 Beto O’Rourke apologized Friday night for writings the former Texas representative made as a teenager describing fantasies about running over children with a vehicle.

“I’m mortified to read it now, incredibly embarrassed, but I have to take ownership of my words,” the Democratic presidential candidate said during a taping of the “Political Party Live” podcast in Cedar Rapids, Iowa. “Whatever my intention was as a teenager doesn’t matter, I have to look long and hard at my actions, at the language I have used, and I have to constantly try to do better.”

His comments come after a report Friday revealed that O’Rourke wrote poems and short stories when he was a teenager describing a scenario in which he would accelerate a car into a group of children while hearing them scream. The report also showed that he was a secret member of a hacking group called the “Cult of the Dead Cow,” which focused on showing people how to hack Microsoft computers.

“It’s not anything I’m proud of today, and I mean, that’s — that’s the long and short of it,” he said. “All I can do is my best, which is what I’m trying to do. I can’t control anything I’ve done in the past. I can only control what I do going forward and what I plan to do is give this my best.”

O’Rourke also wrote more embarrassing prose, with a line in one poem called “The Song of the Cow” stating “Wax my ass, scrub my balls. The Cow has risen, Provide Milk.” He wrote that ditty in 1988 under the now-exposed pseudonym “Psychedelic Warlord.” He launched his 2020 presidential campaign Thursday.