A Great Anti-Vaccine Article: Tucker Carlson and the real victims of media censorship 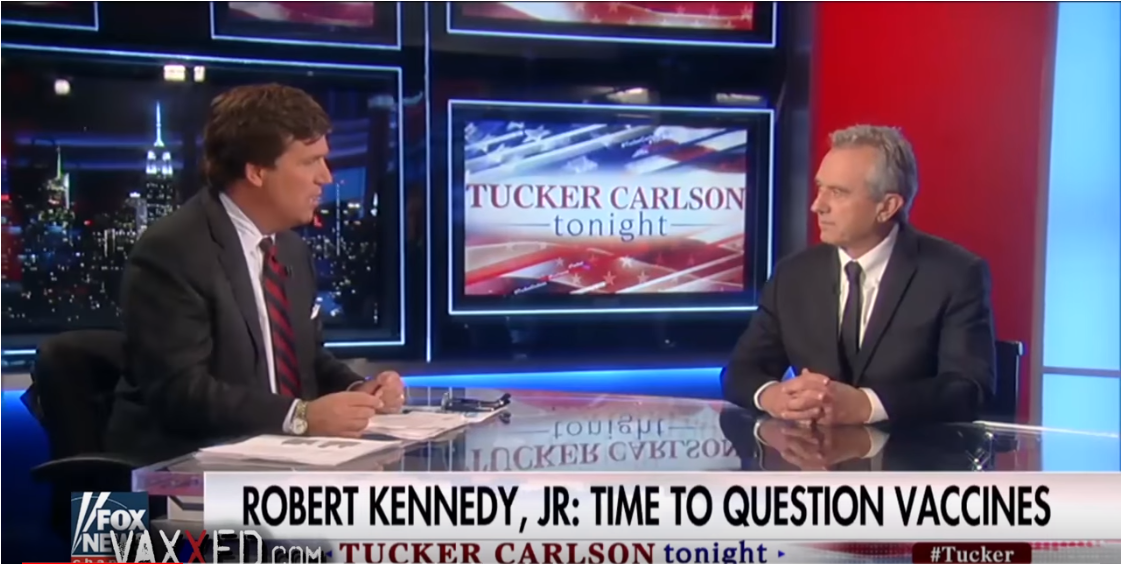 Tucker Carlson and the real victims of media censorship

Billionaire Bill Gates is pouring some of his wealth into development of an HIV/AIDS vaccine that will be mandatory for all young people, even children, in the U.S. Perhaps a scheduled “breakthrough” in this controversial effort and a plan for universal HIV vaccinations explain why major media organs and corporate and government officials are being used to demonize those concerned about the safety of vaccines. The U.N.’s World Health Organization (WHO) has gone so far as to issue a report ranking “vaccine hesitancy” as one of the top “Ten Threats to Global Health in 2019.”

With a mandatory HIV/AIDS vaccine on the horizon, we should be hesitant. The AIDS vaccine could be a major threat to global health. As a vaccine, it gives people a form of the virus that causes AIDS on the assumption that we won’t develop the entire deadly disease. If this assumption is faulty, it could cause HIV/AIDS in millions of healthy people, many of them children and the elderly. There was a swine flu vaccine scandal in the 1970s, when people got neurological disorders from the vaccine before it was withdrawn.

Now that the Russian “collusion” story involving President Trump has run out of steam, new villains have to be identified. Indeed, Rep. Adam Schiff, the chairman of the House Intelligence Committee who is still pursuing Russia-gate against President Trump, has openly called for big companies such as Google, Amazon, and Facebook to censor information casting doubt on the effectiveness of vaccines.

Although it has been open to different views in the past, the “conservative” Fox News channel is now apparently backing Facebook’s effort to “crack down on misinformation about vaccines.” Reporter Dan Springer’s story was headlined, “Study links Russia to US misinformation campaign on vaccinations.” But his own story quoted research saying the Russians were playing both sides – running articles for and against vaccines.

Despite claims to the contrary from Big Government, Big Pharma, and Big Media, many people believe there is evidence linking the rise in autism among children to the MMR vaccine. Rather than have an open debate, the controversial film “Vaxxed,” which explores corruption in science regarding the MMR vaccine, was yanked from theaters and pulled from Robert De Niro’s Tribeca Film Festival. The producers of “Vaxxed” also report their film was removed from Amazon Video, including Prime and streaming, and Pinterest removed searches about safer vaccines and vaccine injury.

Barbara Loe Fisher, co-founder of the National Vaccine Information Center, is the parent of a vaccine injured child and draws attention to children and young people now being subjected to 69 doses of 16 vaccines (starting on the day of birth) by the age of 18. She recently recorded a video on “The New Internet Police” that explains how a coordinated attack is already underway on those who believe in personal freedom and informed consent in regard to these vaccines. Her group is being actively censored and treated almost like a “hate group.” On January 19, she notes, the editorial board of the liberal New York Times declared that “anti-vaxxers” are “the enemy.”

But this face of modern conservatism is now looking like a major embarrassment to the conservative movement. He’s not even that conservative; he frequently brings on anti-American journalist and Edward Snowden collaborator Glenn Greenwald as an authoritative source of information on Russia-gate, and allows Fox contributor Tammy Bruce, a pro-abortion lesbian activist, to posture on his show as a deep conservative thinker. It looks like Tucker has personal knowledge of the “Ship of Fools” he writes about. He may be going overboard.

What’s far more important than the fate of a rich wise guy talk show host confused about conservatism is that we have a national debate on Fox and other channels on such matters as the well-established and verifiable fact that vaccines do cause injury and death, and that an HIV/AIDS vaccine is being fast-tracked. Many people even today do not realize that while vaccines work for a large majority of people, they can also cause serious health problems, even death, for some. In recognition of this fact, Congress passed the National Childhood Vaccine Injury Act of 1986. A National Vaccine Injury Compensation Program to compensate victims of vaccines has dispensed over $4 billion for vaccine injuries and deaths.

The common sense driving the parental concern crosses ideological lines. In my case, one day after the birth of our third child, hospital personnel tried to take him away for a hepatitis B vaccine shot. It’s because of the work of Barbara Loe Fisher and the National Vaccine Information Center that I was skeptical of some vaccines. My wife and I refused to have our child injected with this controversial vaccine. Six months later, concerns were raised about possible mercury exposure in children given hepatitis B vaccines containing thimerosal, a preservative derived from mercury, a toxic metal that can cause immune, sensory, neurological, motor, and behavioral dysfunctions. Thimerosal is a preservative that was used as an additive in vaccines to prevent bacterial and fungal contamination.

Hepatitis B mostly affects drug users, the sexually promiscuous, blood transfusion recipients, and health care workers. So why are innocent children who are not at risk being required to be vaccinated? It’s because the government doesn’t want or can’t identify those who ARE at risk. It’s easier to get the children, who are least likely to get the disease. The same is likely to be true for an HIV/AIDS vaccine. Even assuming that such a vaccine could be developed, it will be easier for national and global public health officials to target those for vaccination who are at less risk of contracting the disease.

I interviewed Barbara Loe Fisher four years ago. “There is a tightening of the noose around the people’s neck when it comes to being able to make vaccine choices,” she said on America’s Survival TV. She also discussed the prospect of a mandatory AIDS vaccine. She is the co-author, DPT: A Shot in the Dark (Harcourt Brace Jovanovich, 1985), and has served on several federal advisory panels and committees. But her organization today is facing a massive censorship campaign because it stands in the way of global and national efforts to inject populations with vaccines containing controversial and sometimes deadly ingredients.

Years ago, I launched the Committee to Protect Medical Freedom, a project of America’s Survival, Inc., and held the first national conference opposing a mandatory HIV/AIDS vaccine. Barbara was a speaker. Jim Turner, a Washington, D.C. attorney and expert on the swine flu vaccine scandal of the 1970s, discussed how government vaccination programs can go horribly wrong. We examined how President Bill Clinton had declared AIDS a “national security threat,” created a Presidential Advisory Council on HIV/AIDS through an executive order, and that U.S. military personnel were being subjected to experimental vaccines. President Barack Obama issued his own follow-up executive order, “Implementing the National HIV/AIDS Strategy for the United States for 2015-2020,” in 2015, and President Trump continued implementation of this strategy in 2017.

Such an “emergency” declaration could also be used today on the civilian population.

The recent controversy over vaccines suggests a governmental effort at the national and even global levels to roll out a controversial new mandatory vaccine policy, possibly involving an HIV/AIDS vaccine. Does President Trump understand what the bureaucrats are doing?

Despite the censorship, a Coalition for Informed Consent in vaccinations has been established. The NVIC is one of dozens of member organizations around the country opposed to mandatory vaccination laws. Hundreds of concerned citizens favoring freedom of choice in health care traveled to Washington D.C. to have their voices heard at a stacked Senate hearing on March 5, 2019, regarding “Preventable Disease Outbreaks.” Parents concerned or “hesitant” about vaccines were portrayed as the villains.

Rather than censor and ostracize concerned parents, Congress should be scrutinizing where taxpayer and U.N. dollars are going. Needed scrutiny should begin with the International AIDS Vaccine Initiative (IAVI), an organization backed by grants from the William H. Gates Foundation, the World Bank, the Rockefeller Foundation, the Starr Foundation, the Alfred P. Sloan Foundation, USAID, PEPFAR (the U.S. President’s Emergency Plan for AIDS Relief) and UNAIDS. The presidentof IAVI is the former chief public health and science officer with Merck Vaccines and a member of the Council on Foreign Relations.

World AIDS Vaccine Day is observed annually on May 18. It marks the day Bill Clinton gave a speech declaring, “Only a truly effective, preventive HIV vaccine can limit and eventually eliminate the threat of AIDS.” The truth is that most people can avoid HIV/AIDS if they just live a healthy and normal lifestyle. But we may not be able to avoid the AIDS vaccine.

The lives of thousands of innocent Americans are far more important than the careers of a few rich talk show hosts on Fox News. Let Tucker Carlson and Sean Hannity give these Americans a voice. That would truly drive the liberals and their own Fox News corporate bosses crazy. It would also reaffirm the right of freedom of speech.

Published with Permission of RenewAmerica.com