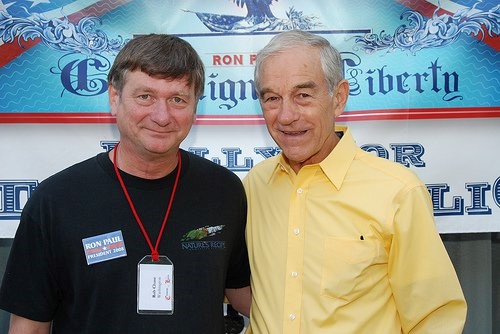 Ron Paul is the only Presidential Candidate I ever loved.

I know some people loved the Kennedy’s and some even loved Bernie, but usually Republicans are supporting whoever seems to be the least evil.

As circumstances fell out I became the Eastern Washington Coordinator for the Ron Paul Presidential Campaign in 2008 and 2012. I also got to give the speech supporting Candidate Paul at those Spokane County Republican Conventions. Both speeches were about the same content and both were well received. I will just start out with an excerpt because that is how I felt and still feel about Ron Paul.

“There is only one Candidate who supports our Platform and the Constitution and that is Congressman Ron Paul from Texas. Ron Paul is a 12 term Congressman, a Veteran, an Economist, a noted author, an intellectual, a Doctor who has delivered over four thousand babies, a family man, and a Bible believing Christian. He is the only honest politician in Washington DC.”

What more could the Republican Party ask for? Answer: Anybody but Ron Paul. I didn’t understand it then but I do now. The directed mob will always choose Barabbas.

And the mob was directed. In Spokane and across the Country. Those delegates who bleed Republican fell into step from top down orders at the GOP HQ. Ron Paul’s character and principles was exactly what the Republican Party did not want. They wanted someone to be their man, not his own man. Since the GOP owns the Press along with the Democrat Party their minions were trained to say – “I like Ron Paul, but he can’t win.” Pretty soon all the Republican Party, except the true believers, were parroting the directed slogan. To add insult to injury, Ron Paul wasn’t even allowed in the Convention at St. Paul, but Joe Lieberman was allowed to address the floor.

Ron Paul didn’t win, but neither did the Swamp creatures McCain or Romney. I suspected and still believe they were designated losers playing that role. A good indicator of where McCain and Romney hearts lay was how they treated Donald Trump in 2016. You would think we would get at least a latent apology from those RINO’s who like Trump. Not likely.

In 2008 George W. Bush had doubled the National Debt. Even then there might have been a chance to unbury ourselves but Obama doubled it again by 2016. Now the National Debt is higher than the National GDP. We are insolvent and the future does not look pretty even though we have Donald Trump now. The same deep state Republican forces who opposed Ron Paul also opposed Trump. Donald Trump won because he had billions of $’s, charisma, and tweeted around the Press. The votes were there for a man of the people in 2016, but they were also there in 2008 and 2012. If Trump can turn things around he belongs on Mount Rushmore – but it was Ron Paul who got the ball rolling.