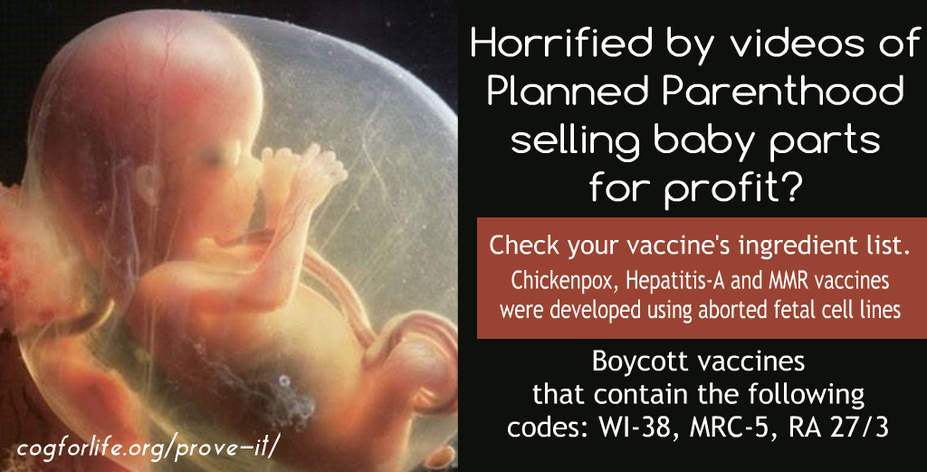 By The Right to Life of Michigan

For several years now, information has circulated among prolife groups and individuals regarding the development of very common vaccines through the use of tissue taken from aborted babies. While initially the reports and information were not conclusively documented, further detailed research by several prolife groups has provided direct proof of a connection between aborted fetal tissue and many vaccines. That connection, and its implications for whether prolife citizens should consider using the vaccines, raises some complicated issues. In sorting through those issues, this LifeNotes will address the basic science involved, the documentation of the abortion-vaccine connection, the moral/ethical questions about using abortion-tainted vaccines, and information about available alternative vaccines.

The vaccine process works by collecting samples of the actual virus, then growing and altering them in the laboratory to make a weakened strain of the disease. The weakened strain is put into a serum and administered into the body (usually by injection). The body’s immune system is more capable of attacking and destroying the weakened virus, and thus develops the ability to effectively fight off the actual disease should the person ever be exposed to it. The advent of vaccines was a major milestone in medicine, saving millions of lives and saving many others from the devastating effects of diseases like polio and diphtheria.

In order to develop the weakened viral strain, there must be a medium or “cell culture” to grow it in. The virus invades the culture cells, feeds off the cell, matures, and multiplies. The cell cultures are a single type of cell that multiplies itself in a predictable fashion and can be sustained in a laboratory setting for years, even decades. These long-lasting cell cultures are called “cell lines.” The original cells that start these cell lines have been taken from a wide variety of sources, from monkey embryo and kidney cells, to chicken and rabbit embryos, and tragically, from aborted human babies.

The issue of concern is that many common vaccines were developed using cell lines that originally were cells taken from electively aborted babies. The vaccines themselves do not contain fetal cells, but there are significant “residual” biological components from the fetal cells that have been assimilated into the vaccine, including cell proteins and measurable portions of fetal DNA.

There are two particular fetal cell lines that have been heavily used in vaccine development. They are named according to the laboratory facilities where they were developed. One cell line is known as WI-38, developed at the Wistar Institute in Philadelphia, PA. The other is MRC-5, developed for the Medical Research Council in England. WI-38 was developed by Dr. Leonard Hayflick in 1962, by taking lung cells from an aborted female baby at approximately the end of the third month of pregnancy. Dr. Hayflick’s article published in the journal Experimental Cell Research states that three cell lines, WI-26, WI-38, WI-44 were all developed from aborted babies. “All embryos were obtained from surgical abortions and were of approximately three months’ gestation.”(1) Dr. Stanley Plotkin, who developed a Rubella vaccine using WI-38, addressed a question at an international conference as to the origin of WI-38. Dr. Plotkin stated:

“This fetus was chosen by Dr. Sven Gard, specifically for this purpose. Both parents are known, and unfortunately for the story, they are married to each other, still alive and well, and living in Stockholm, presumably. The abortion was done because they felt they had too many children. There were no familial diseases in the history of either parent, and no history of cancer specifically in the families.”(2)

The origin of the MRC-5 cell line, created in 1966, is documented in the journal Nature by three British researchers working at the National Institute for Medical Research. They wrote, “We have developed another strain of cells, also derived from foetal lung tissue, taken from a 14-week male foetus removed for psychiatric reasons from a 27 year old woman with a genetically normal family history and no sign of neoplastic disease both at abortion and for at least three years afterward.”(3) Noting that their research parallels that of Dr. Hayflick’s development of the WI-38 cell line, the researchers conclude, “Our studies indicate that by presently accepted criteria, MRC-5 cells—in common with WI-38 cells of similar origin—have normal characteristics and so could be used for the same purposes as WI-38 cells.”(4)

In both of these cell lines it is quite clear that the aborted children were presumed to be healthy, and that there was no life-threatening condition or other medically-indicated reason for the abortion of these two babies.

There is a more recent cell line, PER C6, developed in 1985, which is being used currently in research to develop vaccines to treat Ebola and HIV. The origin of PER C6 is clearly documented. In direct testimony before the Food and Drug Administration’s Vaccines and Related Biological Products Advisory Committee, Dr. Alex Van Der Eb, the scientist who developed PER C6, stated:

“So I isolated retina [cells] from a fetus, from a healthy fetus as far as could be seen, of 18 weeks old. There was nothing special in the family history, or the pregnancy was completely normal up to the 18 weeks, and it turned out to be a socially indicated abortus, abortus provocatus, and that was simply because the woman wanted to get rid of the fetus.”(5)

Currently several vaccines using the PER C6 cell line are in development. Undoubtedly the cells used to establish PER C6 came from a healthy baby, aborted from a healthy mother for social convenience reasons. While many of the common childhood vaccines used today were developed using the WI-38 and MRC-5 fetal cell lines, there are some vaccines available that were developed using animal cell lines. The tables on the following page indicate all U.S. abortion-tainted vaccines, and the available alternatives.

The above list is comprehensive and obtained from the package inserts of FDA-approved vaccines. There are currently no U.S. approved alternatives for Adenovirus, Chickenpox, Hepatitis A, Measles, Mumps, or Rubella. The new version of the Adenovirus vaccine is currently only approved for use in military personnel.

Should these vaccines be used? The moral & ethical considerations

The ethical quandary created by the tainting of these otherwise beneficial vaccines is vexing. Parents are justified in wanting to protect their children from potentially life-threatening diseases, and it can be legitimately argued that parents have an obligation to do so. Likewise, as a society, we must take into consideration the morality and cost of failing to prevent widespread outbreaks of disease.

The moral perspective of those opposed to the use of these vaccines is equally justifiable. If these vaccines were merely tested on patients without their consent, similar to the Tuskegee syphilis experiments, there would be widespread outrage and those responsible for the violation of patients’ rights would face serious consequences. Yet the researchers in this case not only failed to receive consent from the research subjects, but purposefully took their lives.

When dealing with difficult ethical issues, one of the main questions is how should individuals act in a moral way when they are acting in a world that is filled with immorality? The further away the current act (using a vaccine) and intent (protecting a child from a disease) of an individual are from a previous immoral act (aborting a child), the less that individual is restricted by the immorality of the previous act. While the act of aborting the child was certainly immoral, all of the steps involved with the development and use of the vaccines thereafter did not cooperate with the abortion.

The Vatican’s Pontifical Academy for Life, and the U.S. and British bishops conferences have studied the issue in detail and concluded that using the vaccines is morally permissible. However, once a person learns that certain vaccines are morally tainted, there is an obligation to seek out ethical alternatives where possible and to make objections known to health care providers and vaccine manufacturers. In addition, parents are entirely justified in citing a “conscientious objection” to tainted vaccines being used to immunize their children, particularly when the vaccine is not for a substantially threatening illness (Chickenpox). A number of noted prolife activists have weighed in on both sides of the issue. Some have encouraged parents to use and demand nothing less than vaccines obtained through morally acceptable means.(6) Others like Jack Willke, M.D., former National Right to Life Committee president and the late Bernard Nathanson, M.D., prolife activist and creator of “The Silent Scream” have opined that using the vaccines is morally allowable.(7,8)

What is unanimous among all commentators on the subject is that everyone ought to know the facts surrounding the vaccines, and prolife citizens should make an effort to persuade – even pressure – vaccine producers to eliminate their tainted products in favor of ethically acceptable products.