The Democratic Socialist Platform Echoes the Madness of the Khmer Rouge 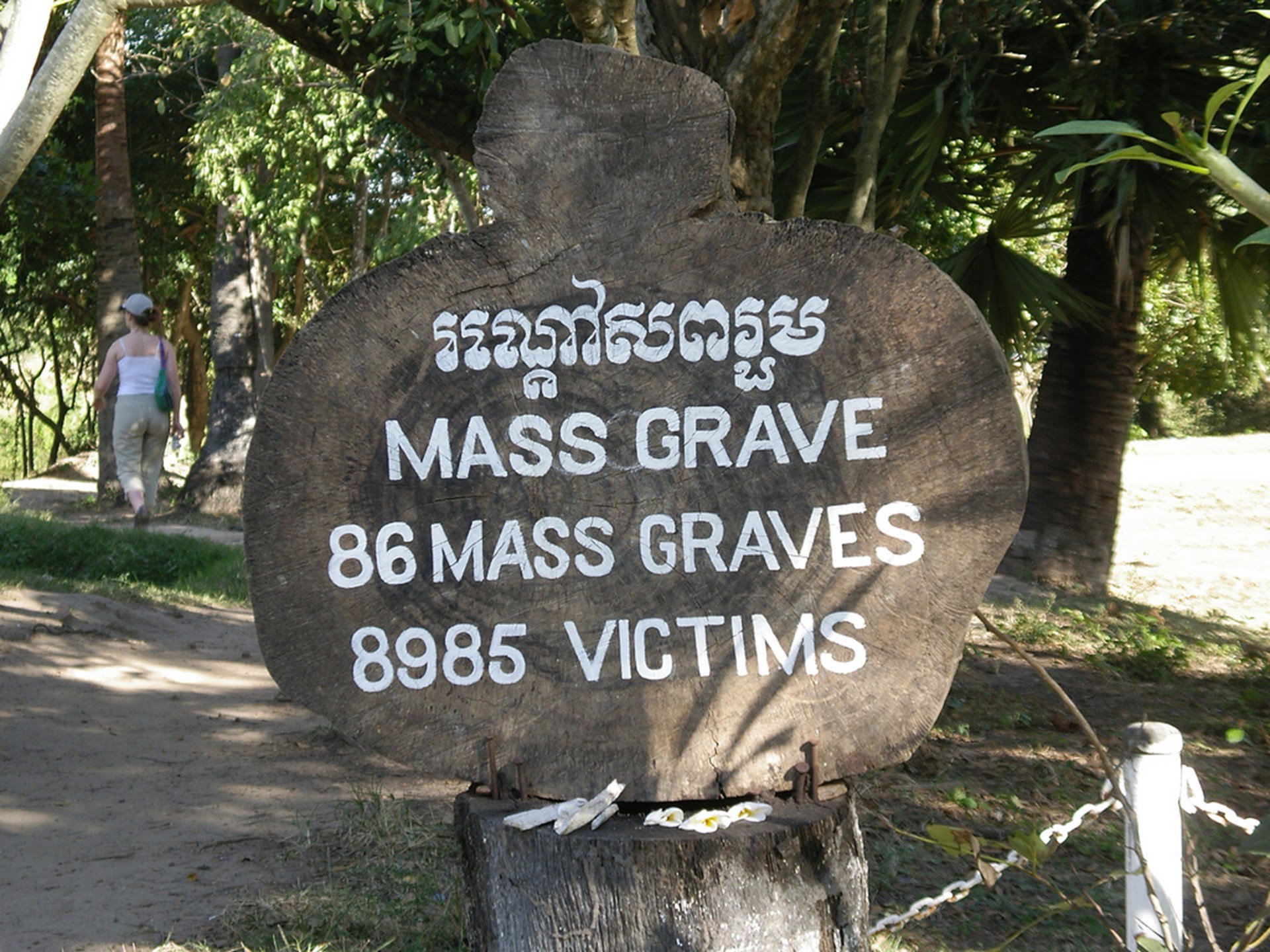 The Democratic Socialist Platform Echoes the Madness of the Khmer Rouge

In 1975, when the Khmer Rouge took over, they quickly emptied the capital of Cambodia, Phnom Penh. This was to be year Zero; a rebirth of Cambodia as an engineered egalitarian, classless rural society with “the corruption and parasitism of city life” eliminated. Several million had to leave at once, including hospital patients. Those who refused were summarily executed. Those who left were forced to work in fields, where many died while being fed starvation rations.

Dehumanizing those you murder is characteristic of totalitarian regimes.

Genocide against their own citizens resulted in up to 2.5 million dead out of a population of 8 million. Over 1.3 million of the dead were executed.

Driven mad by class politics, Khmer Rouge soldiers dehumanized their victims. Khmer Rouge soldiers “fired aimlessly at innocent civilians as long as someone offended them in any way.” They reserved special brutality for those in Cambodia’s middle class, “the doctors, bankers, teachers and merchants, the people who read books and even the ones who just wore glasses.”

Dehumanizing those you murder is characteristic of totalitarian regimes. Hitler killed Jews. Stalin killed kulaks. Mao killed landlords. In Cambodia, the Khmer Rouge took the “most violent and ignorant people, and…taught them to lead, manage, control, and destroy.” As deranged cadres murdered, some chanted the couplet taught by their leaders, “To keep you is no benefit, to destroy you is no loss.”

You want to believe that such madness could never visit America. Yet, a cancer of identity politics, with its concurrent demands for social justice, continues to grow. A mindset of dehumanizing those who are not in your tribe is taking root in more people. After all, the “other” is just someone who is in the way of a more “just” society.

Writing in his book Suicide of the West: How the Rebirth of Tribalism, Populism, Nationalism, and Identity Politics is Destroying American Democracy, Jonah Goldberg observes, “Identity politics in all its forms is just a subset of this worldview. It says ‘My tribe deserves more than your tribe.’”

If my tribe deserves more than your tribe then, in Goldberg’s words, “objective standards of merit or notions of free speech are invalid, even racist, if they perpetuate the amorphously defined evil of ‘white privilege.’”

Goldberg explains succinctly why those demanding social justice aim to dismantle the rule of law:

Spend a few minutes actually studying what activists mean by “social justice” and you will discover that it is often a reactionary effort. It claims the rule of law is a rigged system designed to protect the interests of the patriarchy or white privilege or the “one percent.” Social justice holds that abstract rules or timeless principles are inadequate if they do not lead to “redistributive” or “economic” justice.

While great attention has been rightfully placed on the potentially destructive force of the Green New Deal, other alarming parts of the democratic socialist platform have slipped under the radar. Consider this part of their platform:

Although a long-term goal of socialism is to eliminate all but the most enjoyable kinds of labor, we recognize that unappealing jobs will long remain. These tasks would be spread among as many people as possible rather than distributed on the basis of class, race, ethnicity, or gender, as they are under capitalism. And this undesirable work should be among the best, not the least, rewarded work within the economy.

You might wonder who will do the “spreading” and “distributing” of jobs. The democratic socialists write, “For now, the burden should be placed on the employer to make work desirable by raising wages, offering benefits and improving the work environment.” Impatience with “progress” will quickly morph into demands that the government rectify perceived injustices.

You might also wonder who will decide what is undesirable? The democratic socialists offer no answers. Answers will be provided later, based on the tribal politics en vogue. To achieve the goal of distributing “undesirable” jobs would require no less than complete totalitarian control of the economy.

If you think Americans will categorically reject such vague foolishness, think again. Rather than associating socialism with government ownership of production, today more Americans think socialism means “equality.”If too many “ethnic and racial undesirables” are represented in high-paying jobs in the medical community, will doctors be forced to trade jobs and salaries with medical aides? Will software engineers trade jobs and salaries with office custodians? How likely is Alexandria Ocasio-Cortez to trade jobs with a coal miner in Wheeling, West Virginia?

To achieve the goal of distributing “undesirable” jobs would require no less than complete totalitarian control of the economy. Democratic socialists will enforce the rule of tribal power in place of the rule of law.

In Volume 2 of Law, Legislation and Liberty: the Mirage of Social Justice, Nobel laureate F.A. Hayek challenges us to consider “whether it is possible to preserve a market order while imposing upon it some pattern of remuneration” based on “social justice” criteria and imposed by “an authority possessing the power to enforce it.” Hayek’s answer is “no.”

Why, then, is the concept of social justice so popular? Hayek provides an answer:

The results of the spontaneous ordering of the market [are] interpreted as if some thinking being deliberately directed them, or as if the particular benefits or harm different persons derived from them were determined by deliberate acts of will.

In short, someone did it; so someone needs to fix it.

Using Hayek’s lens, we can see that a belief in injustice could begin in childhood and extend into adulthood. Who has received everything they felt they deserved from their parents, from school, from work, or from life?

We tell ourselves stories about our second-grade teacher who forgot about us, a parent who didn’t understand us during our teenage years, or a boss who didn’t recognize our talent. Looking through the lens of the “story of me,” we feel like victims. This is why stories of victims and victimizers dominate the media. Looking for who is at fault can become a full-time occupation.

No wonder there are so many angry and bitter individuals; they are still trying to get others and life to conform to their expectations. Taking responsibility for our experience of life begins with understanding that life will never conform to our imagined ideas about how things should be.

In his lifetime, Hayek earned a fraction of what Stephen King has earned, and no one is at fault. Hayek writes,

Incomes earned in the market by different persons will normally not correspond to the relative values of their services to any one person … the performance of a Beethoven sonata … or a play by Shakespeare have no “value to society” but a value only to those who know and appreciate them.

In other words, there is no objective value.

Should a tax be placed on Stephen King’s novels to ensure that unpopular writers are better compensated? We can only reach what we see as “justice” by mistreating some people. Hayek writes:

To assure the same material position to people who differ greatly in their strength, intelligence, skill, knowledge, and perseverance as well as in their physical and social environment, government would clearly have to treat them very differently.

Hayek points us to look in a different direction where “only the conduct of the players but not the result can be just.” Of course, democratic socialists argue the opposite—Alexandria Ocasio-Cortez has said a society that “allows billionaires to exist” along with extreme poverty is “immoral.” Ocasio-Cortez didn’t say billionaires are immoral, but by conflating billionaires and poverty, Ocasio-Cortez is implying cause and effect.

The murderous Khmer Rouge leader, Pol Pot, in a 1979 interview said, “Our policy was to provide an affluent life for the people. There were mistakes made in carrying it out.” In one of history’s great understatements, Pol Pot allowed, “Several thousand people may have died.” Good intentions don’t matter, totalitarian social justice policies are antithetical to fostering human well-being.

Tribal conflicts, steadily diminishing in the West under capitalism, will rise again to threaten the peace and prosperity of humanity.

Take a moment and reflect on the breathtaking progress that has occurred in the world due to capitalism. Alexander Hammond observes, “in 1820, 94 percent of the world’s population lived in extreme poverty (less than $1.90 per day adjusted for purchasing power). In 1990 this figure was 34.8 percent, and in 2015, just 9.6 percent.” Perhaps those living in 2219 will wonder how we, in 2019, could live on such meager earnings.

Democratic socialists are tirelessly working to subvert progress. Their policies will destroy the economy and shrink the economic pie. Tribal conflicts, steadily diminishing in the West under capitalism, will rise again to threaten the peace and prosperity of humanity.

Today, some use violence to prevent free speech. We can shudder to think what tribal violence is possible in a future America when citizens are morally and economically impoverished by democratic socialist totalitarian doctrines.