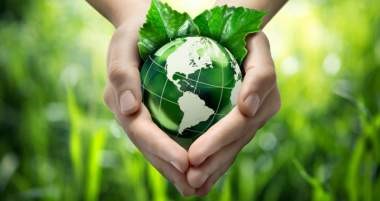 But the cofounder of Greenpeace, who left the group when “eco-fascists” took over, says Ocasio Cortez’s economic plan would make Stalin’s collectivization of agriculture in the Soviet Union look like the work of a genius.

Indeed, it’s worse than that. Patrick Moore’s laconic evaluation of AOC’s blueprint is all anyone needs to see to know it’s a recipe for planetary disaster.

We’d all starve to death, he tweeted on Saturday.

A few weeks ago, Moore said the plan was a “recipe for mass suicide” and the “most ridiculous scenario I ever heard.”

The GND envisions a “net-zero emissions” world that eliminates the use of fossil fuels within 12 years. Otherwise, Ocasio-Cortez predicts, the world will end. Thus, the GND means no cars and no air travel.

Beyond that, however, it envisions zero unemployment and a regular income for those “unwilling to work.” A close look at the plan reveals that Ocasio-Cortez and her backers are using climate alarmism to smuggle socialist totalitarianism into law.

A think tank recently put the cost of this return of this enviro-twist on 1930s Soviet collectivism at $93 trillion.

Not surprisingly, someone who actually knows something about the climate and how energy affects it applied a little common sense and asked AOC a simple question.

Pompous little twit. You don’t have a plan to grow food for 8 billion people without fossil fuels, or get food into the cities. Horses? If fossil fuels were banned every tree in the world would be cut down for fuel for cooking and heating. You would bring about mass death.

2,181 people are talking about this

In early February, Moore spoke to The New American and said AOC’s plan is a “recipe for mass suicide.”

“It’s just quite amazing that someone that is in government, actually elected,” he said, “would propose that we eliminate all fossil fuels 12 years.”

Moore explained that the GND would “basically begin a process of cannibalization among the human species because the food could not be delivered to the stores in the middle of the cities anymore.” Eliminating fossil fuels, he said, would mean “every tree in the world would be cut for fuel. There’s no other source of healing and cooking…. You can use animal dung if there were any animals left … the animals would all die … they would all get eaten.”

Moore said he couldn’t believe an elected official would suggest paying people who are unwilling to work.

The GND, he said, is “completely preposterous” and “mass suicidal” and will likely “put Trump right over the top.”

Asked Moore, “why would anyone vote for something that was going to result in the death of nearly all humans on Earth…. It’s nuts.”

Aside from the GND’s being preposterous, it won’t likely affect the lifestyles of the rich and famous who proposed it. Maybe that’s because they know it’s preposterous.

AOC, also known as Occasional Cortex, is an example. “Since declaring her candidacy in May 2017,” the New York Post reported on Saturday, “Ocasio-Cortez’s campaign heavily relied on those combustible-engine cars — even though a subway station was just 138 feet from her Elmhurst campaign office.”

Ocasio-Cortez’s campaign “listed 1,049 transactions for Uber, Lyft, Juno and other car services, federal filings show. The campaign had 505 Uber expenses alone. In all, Ocasio-Cortez spent $29,365.70 on those emissions-spewing vehicles, along with car and van rentals — even though her Queens HQ was a one-minute walk to the 7 train.”

No subway trains for the woman who decries authoritarianism even as she says we have to stop having children: “The campaign shelled out only $8,335.41 on 52 MetroCard transactions.”

AOC tweeted that she also flies on jets and uses air conditioning: “Living in the world as it is isn’t an argument against working towards a better future.”

And she wrote, “the Green New Deal is about putting a LOT of people to work in developing new technologies, building new infrastructure, and getting us to 100% renewable energy.”

Yeah, and according to someone who actually knows something, Greenpeace cofounder Moore, it’s also about mass starvation and the extinction of the human race.

On that note, a week before Christmas, the New York Times obliged a philosophy at Clemson by publishing this rumination: “Would Human Extinction Be a Tragedy?”

AOC, apparently, thinks the answer is “no.”