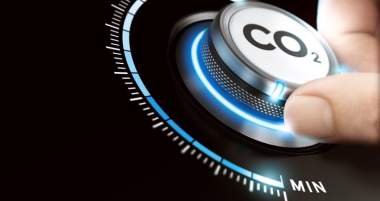 Move over wind farms. Step aside acres of solar panels. There’s a new renewable energy source coming down the pike, and it has the potential to put the others out of business.

Carbon sequestration, as the process is called, removes CO2 from the atmosphere and turns it into a solid form, namely coal, in order to be able to store it safely back in the ground where it came from.

A research team led by RMIT University in Melbourne, Australia, has discovered a new method of taking carbon dioxide in its gas form and converting it into solid coal. The discovery has the potential to completely change the way people regard the carbon dioxide that humans release into the atmosphere. The paper detailing how the feat was accomplished was published on February 26 in Nature Communications.

“While we can’t literally turn back time, turning carbon dioxide back into coal and burying it back in the ground is a bit like rewinding the emissions clock,” said Dr. Torben Daeneke, a research scientist at RMIT University.

Methods of carbon sequestration already exist, but those methods are technically and economically challenging. Major oil companies and energy concerns such as Shell are currently spending a fortune on projects aimed at removing atmospheric CO2 from the air, but those processes involve turning CO2 into a liquid form and injecting it back into rock formations. The process is so expensive that even major companies can’t afford it without government subsidies.

While this is not the first time that scientists have been able to turn CO2 into coal, previous methods required extremely high temperatures and were not viable outside a laboratory setting. The new method can be accomplished at room temperature.

“To date, CO2 has only been converted into a solid at extremely high temperatures, making it industrially unviable,” Daeneke said.

But the researchers found a way around the extreme temperature problem. “By using liquid metals as a catalyst, we’ve shown it’s possible to turn the gas back into carbon at room temperature, in a process that’s efficient and scaleable,” Daeneke said.

The liquid metal catalyst was developed by the researchers with specific surface properties, making it extremely efficient at conducting electricity, while chemically activating the surface.

According to the press release: “The carbon dioxide is dissolved in a beaker with an electrolyte liquid and a small amount of the liquid metal, which is then charged with an electric current. The CO2 slowly converts into solid flakes of carbon, which are naturally detached from the liquid metal surface, allowing the continuous production of carbonaceous solid.”

And, yes, the process has the potential to yield a future energy source. The carbon produced may be able to be used as an electrode.

“A side benefit of the process is that the carbon can hold electrical charge, becoming a supercapacitor, so it can potentially be used as a component in future vehicles,” said the study’s lead author Dr. Dorna Esrafilzadeh, of RMIT’s School of Engineering, who was responsible for developing the electrochemical technique.

“The process also produces synthetic fuel as a byproduct, which could also have industrial applications,” Esrafilzadeh added.

The research was truly an international effort. The scientists at RMIT were supported by researchers at the University of Munster in Germany, Nanjing University of Aeronautic and Astronautics in China, North Carolina State University in the United States, and other universities in Australia.

The bad news? Environmentalist are split on whether carbon capture and storage methods are beneficial to the planet. Recently, 626 environmental groups, including Greenpeace and the Center for Biological Diversity, sent a letter to U.S. legislators saying that they will “vigorously oppose” several strategies of CO2 mitigation, among them the process of carbon capture and storage, which they believe poses significant risks to the planet.

So, the extremely interesting and significant discovery made by RMIT might be moot if certain “green” groups get their way. Carbon dioxide — that natural gas that is necessary for all the vegetation on our planet — is the enemy to them. Nothing, even capturing it out of the air and converting it into clean energy, will change that for some environmental extremists.

Because their ultimate goal is political; not environmental.

Published with Permission of TheNewAmerican.com-