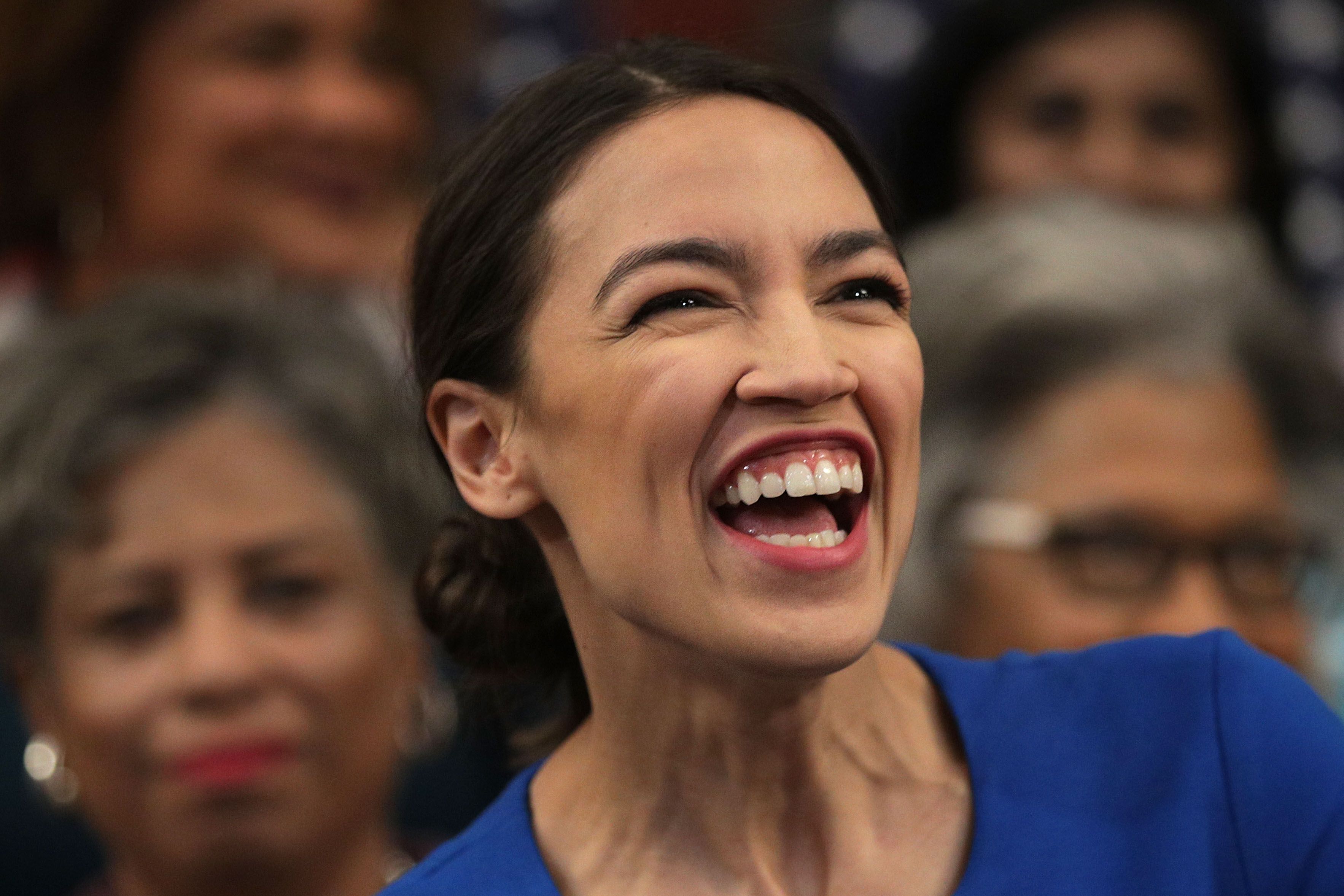 California is the perfect example of what America will be reduced to if a proposed Green New Deal goes into action because in many respects it has already happened in the State. The middle-class in the State has been hollowed out as they are taxed in the billions to fund the ever mounting public employee pension debt. Former Governor Brown said that the State only caters to the rich and poor, which mirrors the devastation wrought by catering to high-tech employees and the swelling ranks of low-income service workers who serve them. California is a bifurcated society of plutocrats and serfs. Low-income workers, many illegal aliens, are being subsidized by taxes collected through a green environmental program called “Sustainability”, which is the proposed world-wide “solution” to the “theory” of climate change. These subsidies have not only redistributed wealth, but have the added benefit of creating a new class of voters for Democrats. Rancho Cucamonga, California is a model city of Sustainability policy. In fact, the city touts over 40 Sustainability programs, pushed by corporate nonprofits, youth volunteer and minority groups.

On February 4th 2019, Congresswomen Alexandria Ocasio-Cortez (AOC), an avowed authoritarian Socialist who promotes corruption and wealth confiscation, released her national Green New Deal scheme promoting environmental Sustainability. The “deal” is a massive transfer of wealth based on race. AOC claims that America is stolen land. The Green New Deal is a Trojan Horse.  It is Socialism masquerading as environmentalism.

Ideologue Mayor Dennis Michael of Rancho Cucamonga, California and AOC are on the same page in regards to Sustainability. The Mayor, known as “Mr. Sustainability” by locals, claims to be a Republican; however, he is diametrically out of step with his party because Republicans are opposed to Sustainability, an authoritative solution for climate change, which seeks to control the use of everything people need to live by punishing them in order to change their behavior to use less; Sustainability is nothing but rationing. That seems to be okay with the Mayor, who supported spending $9,000 to lobby for an increase in the gas tax to help cure climate change.

The progressive Mayor touts the city’s climate action plan. This plan seeks to redistribute money collected from increased Sustainability taxes, like the gas tax, and give it to disadvantaged. communities. He puts his trust in unelected regional Soviet (the word Soviet means “council” in Russian) style boards, such as SCAG.

The Southern California Association of Governments (SCAG) Regional Transportation Plan & Sustainable Communities Strategy (RTP/SCS) foists a half trillion dollar in proposed new taxes on the residents of Southern California. SCAG representative, Michelle Hansen says, “There is such a thing called structural disinvestment and structural racism and the [RTP/SCS] is trying to contradict centuries of disinvestment. In other words, people must pay reparations to people that are low income/minorities because they were prejudiced in the past; this seems to fit with AOC’s narrative that American is stolen land. Also, the RTP/SCS supports the Sustainability element of Environmental Justice, which accomplishes redistribution of tax money by insuring that low income households and also minorities interests are “protected” — protected from pollution because disadvantaged communities are being exposed to pollution, especially Latino communities.

Gary Gileno, of the Grindall61 YouTube News Channel, explains in a video The Truth About the Green New Deal: It’s a Massive Transfer of Wealth Based on Race – Cal Enviro Screen Computer Program 3.0 denotes Southern California’s most disadvantaged communities, meaning a city population that is more that 80% Latino. Disadvantaged communities, by definition are Environmental Justicecommunities, whereby communities of color are far more likely to suffer from pollution than non-communities of color. Cap and Tradeand gas tax money are being funneled into these communities, promoting Sustainability, in the name of fighting climate change.  The absurdity of this is agency central planners want people to believe that pollution skips over White and Asian areas and only impacts Latino areas. This is redistribution of wealth based solely on race. Furthermore, there is irony in that Sustainability taxes equally impact the poor and disadvantaged communities. For example, the gas tax impacts the one million illegal aliens that now drive cars in California.

Like many cities throughout the Country, the city of Rancho Cucamonga (RC) publishes a recreation guide/city newsletter a few times a year. However, in recent years, Rancho’s version slants towards political agendas. “Volunteers” touts its own section debuting in 2018 and in 2019, “Healthy RC” — a Michelle Obama initiative — is prominently displayed. These programs promote youth groups and college students, who are being brainwashed in theocratic “Mother Nature” worship. According to the report, Sustainability: Higher Education’s New Fundamentalism, “college campuses is where the movement gets its voice of authority, and where it molds the views and commands the attention of young people.” This creates ready-made enviro-activists to push the city’s Sustainability agenda: Children, teens and minority groups act as political pawns to push the city’s “vision” as a “collaborative” community input process, which in turn is used by State legislatures to create more environmental laws because they claim it is what the people want, even though no one voted.  Our children are being subjected to government propaganda in order to change their behavior to support Sustainability.

On February 7, 2019, Attorney General for the State of California, Xavier Becerra, who has been endorsed by the Marxist California La Raza (meaning” the Race”) Lawyers Association, stated at a university event titled, Fighting for a Sustainable Future and Healthy Communities, that he would appeal to the rights of “Mother Nature” the Greek Gaîa, a primordial earth goddess in Greek myth, literally meaning “earth” — over Constitutional law. College kids are being brainwashed in Gaia worship.

“… it’s not in my job description. It certainly is not written in the California Constitution, but I will tell you the last enemy I want is Mother Nature… and I plan to protect her. And for those that have not been honest, it’s time to come to Jesus…”

In the Spring 2019 edition of the Grapevine RC Community Services Recreation Guide, the city touts the awards received for sustainability and energy efficiency efforts through the Sustainable Community Action Plan (S/CAP), a voluntary plan to reduce CO2 emissions in the city. Emission reduction is arbitrary and meaningless. For example, the State beat its initial emissions goals before 2020; however, the Democrat controlled legislature doubled-down and set even stricter goals, evidencing their authoritarian mindset of control.

Mayor Michaels believes that receiving awards from groups that push Sustainability “…authenticates the city’s holistic (all-inclusive, universal) approach to sustainability that encompasses a collaborative community input process.” These awards are claimed to validate the plan. In truth, they are just a rationalization for the plan, which should have never been installed in the first place.

The Mayor promotes the plan’s “Triple Bottom Line”: Environment, Economy and Community Equity & Health. “This is an evaluation tool and process developed to enhance the plan’s sustainability connections and potential outcomes.” This basically means the feeble attempt to measure CO2 emissions, as a goal, is a guess at best; therefore, the Triple Bottom Line is basically meaningless.

Environment – Claims a goal of reducing CO2 to some arbitrary level, which is impossible to measure because CO2 is fungible and blows around in the atmosphere. This also promotes reducing resource consumption of water, energy and fuel.

Economy – “Increases energy, water and fuel cost savings and expanding workforce training and recruitment in order to attract environmentally friendly businesses, all the while attempting to reduce maintenance and operating costs.” This basically promotes rationing of energy, water and fuel. It also, promotes cronyism because it illegally favors “environmentally friendly business” — businesses designated has Benefit Corporations or B-Corps that push the agenda of Sustainability, over other businesses. This is blatant discrimination.

Community Equity & Health – Touts improving community “health”. This is Environmental Justice. This also contains a goal to propagandize the public for “support of Sustainability goals” by “engaging and empowering community”: (volunteers, and children) and local organizations (nonprofits pushing Sustainability).

Key areas in the S/CAP plan include:

As mentioned, the Mayor believes that receiving awards for the S/CAP “authenticates” the S/CAP plan. The awards received are from regional players and nonprofits that benefit directly from Sustainability grants. Therefore, these awards are basically mute because the city received them from nonobjective players “in the climate game”. They are biased and push the agenda of Sustainability. Awards presented are usually based on CO2 measurement models that rely on United Nations Intergovernmental Panel on Climate Change (IPCC) data, which have been discreditedbecause they have been found to be flawed due to fraud.

All Sustainability/Sustainable Development and Cap & Trade programs promote environmental-green tyranny and need to be scoured from local cities. They are patently unconstitutional because these programs are installed through a corrupt faux consensus outreach process, which usurps our Constitutional Republican form of government. The people don’t get to vote on these programs. They are installed through biased surveys and reinforced by “stakeholders” — corporate nonprofits, youth groups, volunteers, and minority groups — that act as a faux democracy to encumber private property rights, redistributing wealth to disadvantaged communities.

Actions You Can Take

Recognizimg Agenda 21 in Your Community

Here is a Action Plan you can use.

Publshed with Permission of AmericanPolicyCenter.org