Why Muslims in Congress push for a 90% tax rate 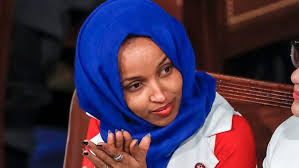 Why Muslims in Congress push for a 90% tax rate

New Muslima congressman (generic use of “man”) Ilhan Omar is proposing a 90% tax on the wealthiest Americans. This, of course, is insane. These are the folks that know how to turn money into jobs. The last thing we should want to do with their wealth is siphon it off and dump in a bottomless federal money pit where it will be used to pay shrimp to run on treadmills.

No matter what a wealthy American does with his money, it’s good for the American economy and the American worker. He can use it to expand his own business, which creates jobs for those who do the build-out and for those who get jobs in the expanded enterprise.

If he builds a mondo-mansion, that’s good for plumbers, landscapers, drywallers, roofers, fence-builders, cement mixers, pool installers, carpet layers, and real-estate agents. If he parks the money somewhere, that’s good for bankers and for entrepreneurs looking to borrow money to start a new business.

If he takes his family on a vacation, that’s good for those who work in resorts and own them. If it’s a ski vacation, it’s good for ski resorts, ski manufacturers, and people who give ski lessons.

The point is that it is idiocy to think taking money from those who know how to make it is somehow good for the country. But that’s what Rep. Omar wants to do. Now other liberals – Elizabeth Warren, Alexandria Ocasio-Cortez, and Bernie Sanders – want to do much the same thing, but they are doing it out of simple display of utter economic ignorance.

But in Rep. Omar’s case, there may be a deeper and darker impulse at work, the drive to expand the reach of Islam at the expense of the American-led West. Islam teaches its devotees that it is the duty of the Prophet’s followers to plunder the infidel West, through outright submission or through compelling infidels to pay the jizya, a tax which is more like mob protection money than anything.

Islam has always, for all of its 1400 years, nursed the growth of this bitter, hateful seed. For instance, in the 1780s, the Barbary Pirates, Muslims one and all, were attacking American merchant ships in the Mediterranean without any provocation, robbing them blind, and capturing their crews for the slave trade. Over one million Europeans were reduced to slavery by the Muslim hordes between the 16th and 19th centuries.

Thomas Jefferson and John Adams met in London with Tripoli’s envoy, Ambassador Sidi Haji Abdrahaman, to find why in the world our ships were being pirated when we had done absolutely no harm to Muslims. Here’s what the ambassador said, according to Jefferson and Adams (in a letter to John Jay); emphasis mine:“It was written in their Koran, that all nations which had not acknowledged the Prophet were sinners, whom it was the right and duty of the faithful to plunder and enslave; and that every mussulman (i.e., Muslim) who was slain in this warfare was sure to go to paradise. He said, also, that the man who was the first to board a vessel had one slave over and above his share, and that when they sprang to the deck of an enemy’s ship, every sailor held a dagger in each hand and a third in his mouth; which usually struck such terror into the foe that they cried out for quarter at once.

Jefferson had to go to war to stop this literally diabolical practice. Muslims were demanding 10% of our entire federal budget as ransom for sailors and ships, and we were paying it until, as president, Jefferson got fed up and sent the Marines off to wage war against them and put a stop to this foolishness. (Jefferson learned the hard way that force is the only thing that will stop the advance of Islam. If we think something different today, that’s both naive and dangerous.)This duty imposed on Muslims by Allah himself is part and parcel of what it means to be a Muslim, and has been from day one. It’s in the very DNA of this dark religion. It may be suppressed for a time, but eventually it will break surface.If you are a faithful Muslim, as Ms. Omar is, and you are a congressman and thus have the power to tax, what better way to plunder the West than by getting their own government to confiscate 90% of everything they own.