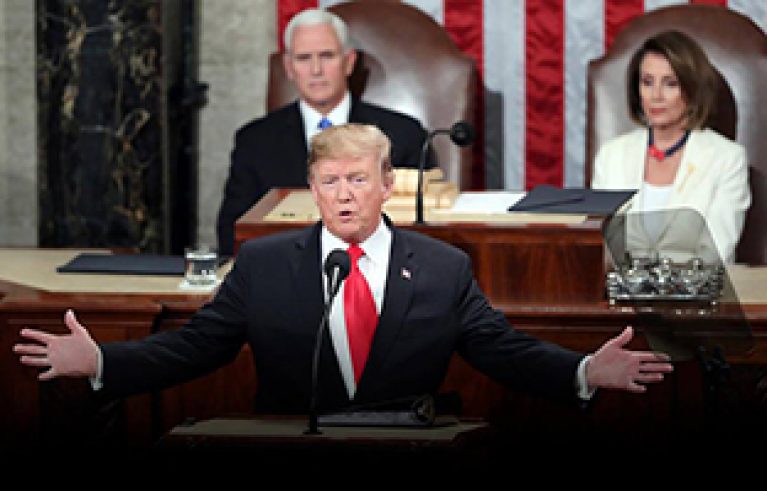 When President Trump told Americans in his State of the Union address that “we are alarmed by new calls to adopt socialism in our country,” one would assume he was talking to the openly socialist members of Congress, such as Bernie Sanders and Alexandria Ocasio-Cortez.

But Trump’s stated “resolve that America will never be a socialist country” applies equally to any and all politicians, including those of both major political parties, at all levels of government, who use all manner of excuses to adopt socialism into mainstream policymaking.

Once again, the supermajority Republicans in the Idaho Legislature find themselves at this juncture. Voters in November approved an initiative to expand Medicaid, which is a socialist program. And every legislator who is paying the slightest bit of attention knows that Medicaid spending is already out of control. Twenty years ago, Medicaid took about 17 percent of the state budget, today it gobbles up nearly 30 percent of total state spending.And that’s without Medicaid expansion, which arrived at the Capitol sans a funding stream.

Yet, some lawmakers are reluctant to oppose the “will of the people.” They’re more concerned with doing what they assume is politically expedient than they are with protecting Idahoans from Obamacare’s socialism and the exploding Medicaid budget.

Seventy-six years ago this month, Idaho lawmakers were confronted with a similar problem. In November 1942, 68 percent of Idaho voters approved a monthly pension for everyone 65 and older. The pension law passed by a wider majority than Medicaid expansion. Knowing that such a plan was utterly unaffordable, the 1943 Legislature repealed the voter-approved pension plan and the governor signed the repeal into law, ending the state’s brief foray into a government-run universal old-age program.

Of the repeal bill, Gov. Clarence A. Bottolfsen, a Republican, wrote, “I have always felt that the voice of the people should not be ignored, but I am equally confident that if the people themselves could view the financial picture of the state of Idaho as I have viewed it and realize the many demands which are to be made upon the people in the future, they would commend the legislature and myself for the step that is now taken.”

The same words could be applied today. Voters had no idea what Medicaid expansion would mean for the long-term financial health of the state. And while we can applaud lawmakers for considering so-called “sideboards” like work requirements, copayments and lifetime limits, those do not cause Medicaid expansion to cease being socialist and budget-busting. If voters approved a law requiring me to surrender my car to people without transportation, it would still be socialism even if the Legislature required beneficiaries to get a job before driving off in my Prius.

An outright Medicaid expansion repeal is the right and necessary course of action for lawmakers interested in protecting taxpayers from severe tax hikes or deep cuts to public education. Repeal is also right and necessary for those concerned with the expansion of government control of our lives.

But if nothing else, the same objective can be achieved by binding Medicaid expansion’s future to the fiscal promises that its proponents made in the general election. If the cost of expansion exceeds projections, the program should automatically end. Defenders of Medicaid expansion should be comfortable with that, because they should be comfortable with the numbers they presented to the electorate.

And, opponents of Medicaid expansion should be content with enacting a dollar-activated kill switch, because cost overruns are inevitable. Even House Minority Leader Mat Erpelding acknowledged on former gubernatorial candidate Tommy Ahlquist’s podcast this week that the cost projections for Medicaid expansion are probably off, especially if the economy tanks.

Trump is correct to be alarmed by the noise being made by leftists who, today, view Nancy Pelosi as a “radical conservative” Democrat. We all should be. But real danger lurks in politicians who allow socialism to further entrench because it appears easier than the alternative. I put it to timid legislators: To allow Medicaid expansion to go forward, unlimited and unchecked, would prove Idaho’s Republican-led Legislature functionally indistinguishable from a Legislature run by Bernie Sanders and Alexandria Ocasio-Cortez. That, the president might muse, is even more cause for alarm.

About the Author: Wayne Hoffman
Wayne Hoffman is one of Idaho’s leading experts on public policy, the Idaho Legislature and the practice of journalism. Hoffman has spent 25 years writing about government and politicians. He writes a weekly column, found in newspapers and on websites throughout Idaho, and is often invited to speak on complex issues including taxation, health care, free markets and education. Throughout his years in the news business, Wayne won numerous awards for investigative and political journalism. During his years of covering the state legislature, governor’s office and state agencies, Wayne often exposed government waste, failed government programs and politicians whose voting records were inconsistent with their rhetoric. After leaving the news business in 2005, Wayne became the special assistant to the director of the state Department of Agriculture. In 2006, he managed the communications efforts of several successful political campaigns and became the communications director for Congressman Bill Sali. Wayne lives in Nampa with his two children. Wayne has been at the helm of Idaho Freedom Foundation since the organization launched in January 2009. Email: Wayne@IdahoFreedom.org