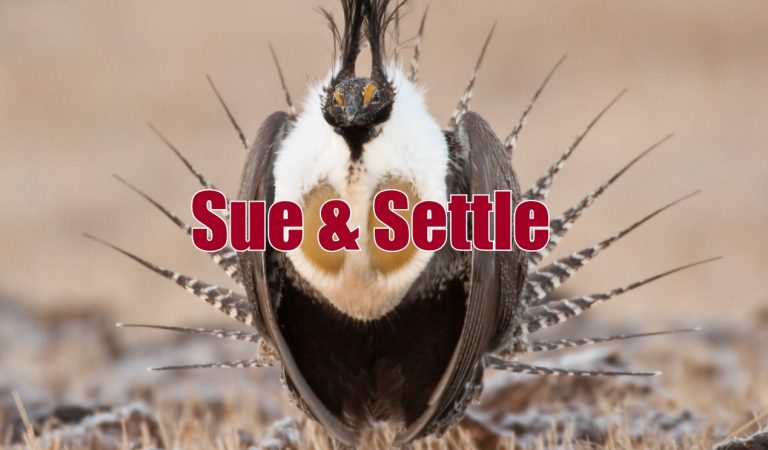 “Faced with a barrage of allegations that sap agency time and resources whether they have merit or not, the government is too often motivated to capitulate through secret settlements. Some agencies have even been known to invite litigation with the purpose of entering a settlement to provide political cover for controversial agency policies...”

For decades, Americans have been paying radical special interests to implement economically-destructive policies and put lands and resources off-limits to rural communities. Shady “sue & settle” deals happen when environmentalist groups and other third-party special interests sue this or that federal agency, typically over some minor technical error in a National Environmental Policy Act (NEPA) or other review process. Such court actions often shut down economic activity on federal lands, especially when it comes to resource management and development. But because these lawsuits are expensive and time-consuming to defend, federal agencies will often settle with radical non-governmental Organizations (NGO’s), sometimes for millions of dollars. In turn, the NGO’s will apply their taxpayer-funded awards to other lawsuits, creating an endless loop of sue and settle and get sued again actions.

The Interior Department, under the leadership of Secretary Ryan Zinke, has taken measures to end this destructive and costly practice, and recently issued a directive to bring transparency to the processes which have previously allowed NGO’s to run amok on the American taxpayers’ dime. For years, hundreds of private organizations representing natural resources-based industries and rural communities have fought to reform sue & settle. On September 17 the Montana Farm Bureau Federation issued the following press release:

Activists have grown rich by suing the government and reaping billions of taxpayers’ dollars – and all in secret. The U.S. Department of Interior, however, has issued an order to curb this abuse of basic, democratic processes and to open backroom deals to public scrutiny. The American Farm Bureau Federation applauds this overdue action.

Interior alone paid out more than $4.4 billion in monetary awards under terms of 460 settlement agreements and consent decrees between Jan. 1, 2012, and Jan. 19, 2017. In other words, Interior paid out an average of more than $800 million a year while keeping key aspects of litigation secret. It’s easy to see why so many outside observers fear an unaccountable bureaucracy cutting deals with activists.

“The Department of Interior is shining light on a corner of government most people don’t even know exists,” AFBF General Counsel Ellen Steen said. “Basic transparency demands that citizens know what their government is doing. When activists sue, they can tie up the government with dozens of frivolous claims but still recover attorneys’ fees if a judge upholds even one, solitary claim.

“Faced with a barrage of allegations that sap agency time and resources whether they have merit or not, the government is too often motivated to capitulate through secret settlements. Some agencies have even been known to invite litigation with the purpose of entering a settlement to provide political cover for controversial agency policies. If they settle, agencies often agree to pay legal fees, which further fuels the sue-and-settle machine. This action is a solid first step to fix the problem. Every other federal agency should follow suit.”

“It’s about time this disturbing government practice is being brought to light,” said Montana Farm Bureau Federation’s Executive Vice President John Youngberg. “It’s important that all of these settlements will now have public scrutiny so people can see exactly where their tax dollars are going—being paid out by government agencies to activists and their lawyers. This will hopefully put a halt to these frivolous, endless lawsuits.”

Among other things, the department has committed to:

•Post a searchable list and text of final judicial and administrative consent decrees and settlement agreements that govern departmental actions along with details of attorneys’ fees paid.

•Post any proposed consent decree or settlement agreement that commits DOI to seek a particular appropriation or budget authorization from Congress or formally reprogram appropriated funds.

•Publish notice of proposed consent decrees and settlements in the Federal Register and provide a public comment period of at least 30 days.

Full text and details of the order can be found here: https://www.doi.gov/sites/doi.gov/files/elips/documents/so_3368_promoting_transparency_and_accountability_in_consent_decrees_and_settlement_agreements.pdf