Sharyl Attkisson: The Government Has Rigged The Rules To Avoid Accountability 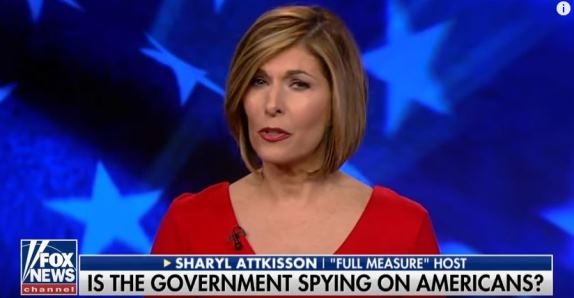 Sharyl Attkisson: The Government Has Rigged The Rules To Avoid Accountability

We Americans like to believe we live in a free country with the right to use the justice system to ensure that government abuses are stopped or redressed. Award winning investigative journalist Sharyl Attkisson has learned that’s far from the truth, and it’s an awful thing to experience first-hand.

A federal appeals court recently heard oral arguments in Sharyl Attkisson’s lawsuit against former Attorney General Eric Holder, unnamed “John Doe” federal agents at the FBI and Justice Department, and others. At issue are the intrusions into her computers while she worked as an investigative reporter for CBS News, revealed by multiple forensic investigations showing use of proprietary government surveillance programs.

In a recent article for RealClearPolitics, Ms. Attkisson said it was clear early on that the Justice Department was not interested in investigating or prosecuting its own. So she began the search to find the facts about the invasion into her computers and life. That morphed into a lawsuit for damages, because that’s what the law sets out as the legal remedy.

It’s been a long and frightening lesson, said Ms. Attkisson, because the government has the benefit of endless time and taxpayer funds to delay and obstruct.

The rules seem rigged to protect government lawlessness, and the playing field is uneven as she discovered. After years without turning over a single document in response to dozens of Attkisson’s subpoenas, the government now argues that her case should be dismissed, in part, because she hasn’t learned the names of the “John Doe” federal agents to insert in the lawsuit; names which only the government knows and has refused to divulge.

In short, the government withheld the names, and now argues the lawsuit should end because Attkisson and her attorneys haven’t learned the names. That effectively prohibits citizens from obtaining justice when government is the lawbreaker.

Appeals Court judges who heard the government’s argument in the case seemed incredulous at that logic, but that doesn’t mean Ms. Attkisson will prevail.

One would think that the Trump Department of Justice would be anxious to purge such egregious anti-constitutional behavior attributable to the Obama administration, but a vicious cycle has arisen: Ms. Attkisson’s legal team has to attribute these abuses to specific people by name.  Yet they can identify the perpetrators only through the legal “discovery process,” which the government is fighting each step of the way.

As Ms. Attkisson noted in an interview with Elise Cooper for The American Thinker, “What was done is a crime because there apparently was no FISA warrant, which is required to spy on a U.S. citizen.  The DOJ is not making any attempt to find out who in the government was involved, and they are preventing me from also finding out.”

What Americans need to understand is that just because the presidency changed from President Obama to President Trump, that does not mean that career government employees change Cooper and Attkisson explained. “I am fighting the bad actors at the DOJ who are still protecting people and who are still obstructing this suit.  Many everyday workers and bureaucrats do not change from one administration to the next.  They are often the ones who basically run the government, these faceless people.  They are the ones that decide what information filters up and down.  In this respect, it does not matter who is president.”

Ms. Attkisson went on to tell Cooper, “We are arguing violations of the 4th and 1st Amendments and that of the Telecommunications Act.  There are free press and privacy issues.  A GoFundMe page has been set up by a diverse group of bipartisan supporters that include conservatives, liberals, and civil rights activists.”

What is even more remarkable is that Ms. Attkisson has had to go it alone in her battle against government surveillance and intrusion into her computer. None of the big press freedom, freedom of expression or civil liberties organizations have gotten in the fray on her side.

Although Ms. Attkisson’s supporters are bipartisan believers in press freedom and constitutional liberty, the obvious inference one should draw from that is the national press and civil liberties organizations are unwilling to take the case or assist Sharyl Attkisson because it involves wrongdoing by the Obama administration.

One reason Sharyl’s case is so important is because there are likely more cases like hers that have gone undiscovered: Internal emails at the “shadow CIA” company Stratfor, and disclosed by WikiLeaks, imply a larger effort.

If these violations go unanswered and unpunished, government attacks on journalists and citizens will be left, unchallenged, to expand. Sharyl’s lawsuit has important Constitutional and freedom implications for every American. She is courageously proceeding — really on behalf of all Americans.

That is why a group of individual believers in constitutional liberty have stepped up to support Ms. Attkisson through a GoFundMe campaign.

CHQ is participating in this effort because we believe this is an extremely important case about the limits and consequences of government spying on Americans’ personal and work computers, and is being watched by many.  It is in the public interest to seek accountability.  It is at our own peril that we give up on the old-fashioned free press and privacy notions set forth in our Constitution.

We urge all CHQ readers and friends to visit Sharyl Attkisson’s GoFundMe page and make your most generous contribution to expose the Obama administration’s wrongdoing and to identify the Deep State operatives behind it.