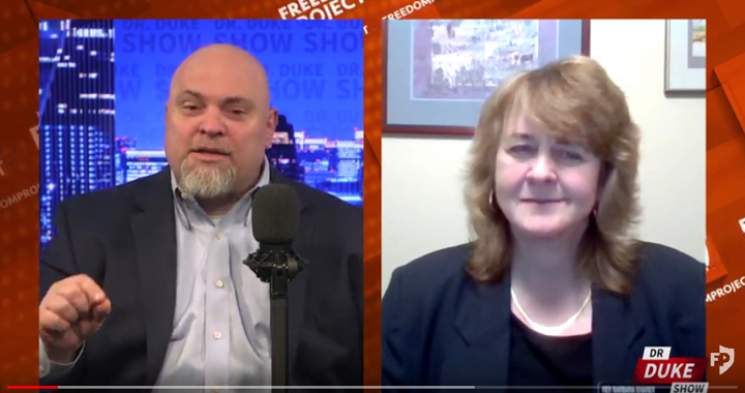 Representative Dorothy Moon, who serves on the Idaho House of Representatives’ Education Committee, blasted the bureaucrats involved and noted that the whole subversive operation appeared designed to “fundamentally change” America. “The content, appalling enough to put a common person in prison for its dissemination, wasn’t apparently deemed inappropriate or offensive enough by the members of this taxpayer-funded department who promoted the program,” Representative Moon told The New American in a statement. “They were operating apparently under the auspices of a federal grant handed out during the Obama Administration.”

The Republican lawmaker, an outspoken supporter of family values, noted that the Obama-era grant was ostensibly established to “enlighten” Idaho’s youth about sex in these “changing” times. “And changing they are; sexual identity and traditional forms of relationships are being challenged by forces outside this government’s control,” she said. “That worries me. As bad as all this sounds, one should wonder what other forces purposely focus on destroying traditional American values? I don’t believe you would have to ponder that question long before you would realize that the undercurrent of political activism is fully directed to fundamentally change America. Heard that before?”

News of the scandal first broke on FreedomProject Media’s Dr. Duke Show, an education-focused show with Dr. Duke Pesta. In an exclusive interview, Representative Barbara Ehardt, who also serves on the House Education Committee, explained how “agents” from the Idaho Department of Health and Welfare had been lawlessly violating state statutes and constitutional protections of parental rights by blatantly sexualizing children — and using false information to boot. Because these programs circumvented the legislature and local school boards, the bureaucrats were also trampling on states’ rights. The money to do it came from the feds.

As if to confirm that, the “sex-ed” content was so appalling and graphic that even Facebook would not allow FreedomProject Media to boost a post about it, citing the very same sexual content being given to Idaho children. “The ad isn’t running because it doesn’t follow our Advertising Policies,” Facebook said in its note about what was “preventing your ad” from being allowed. “We don’t allow ads that depict people in explicit or suggestive positions, or images that show nudity or cleavage — even if portrayed for artistic or educational reasons.” So the content is too graphic for Facebook, but bureaucrats consider it fine for Idaho children.

Among the most controversial materials to be exposed thus far is the innocuous-sounding “Reducing the Risk,” a supposed “abstinence-based curriculum” used in Idaho high schools and middle schools. From the title, a parent or a legislator could be forgiven for thinking that the program would teach children to remain abstinent until marriage. But of course, that is not what it does at all. Instead, it encourages and facilitates access to contraception and testing for venereal diseases without parental consent so children can engage in “safe” fornication. The “activities” for children in the program include helping them find Planned Parenthood clinics and other such facilities.

Perhaps most alarming to parents and lawmakers who believe children should be receiving at the very least accurate information is the blatantly misleading definition of “abstinence.” According to the teachers’ manual for the program, abstinence means not engaging in sexual activity that “carries a risk for pregnancy or STD/HIV.” Outraged lawmakers and critics pointed out that this fake definition equates “protected sex” with actually abstaining from sexual activity. And that is almost certainly by design, as the peddlers of this propaganda hope to profit when children get pregnant or end up with venereal diseases and seek out Planned Parenthood clinics for help dealing with the consequences.

“What you don’t know will hurt you,” explained Representative Moon. “Those words could ring no truer than what shocking surprise Idaho’s Health and Welfare Department’s exposed in their course material designed to educate your children about sexual matters. The agencies backdoor exploitation of public trust bubbled to the surface the other day. An alarmed mom learned from her daughter how uncomfortable she was with said agency’s sexually explicit content exposed during health class. This mom wasn’t the only one concerned. Apparently, this content and classroom exhibition has been offered to 18 high schools throughout the state.”

Despite being so controversial, the Education Committee was never given an opportunity to learn about the materials — much less scrutinize them. None of the course content was approved by the State Board of Education, the local school boards, or the legislature. And that is despite the fact that Idaho has strict laws governing what sort of “sex-ed” schools may offer children, with the law saying that the primary responsibility for sex education “rests upon the home and the church and the schools can only complement and supplement those standards which are established in the family.”

The Idaho state constitution also powerfully protects parental rights from precisely this sort of encroachment. That has lawmakers such as Representative Ehardt and others suggesting that bureaucrats were flaunting the laws. Lawmakers are now working on legislation that would require parents to opt in before any sort of sexual content could be presented to children. In Indiana, outraged lawmakers responded to this sort of insanity by passing a law making it a felony to expose children to obscene “sex-ed” materials.

Countless parents in conservative states have continued to send their children to government schools in the naive belief that this sort of perversion and sexualization was isolated to far-left states such as New York and California, where more than one in four children now claim to be “gender non-conforming.” The reality, though, is that this filth now saturates public education across America and beyond. The United Nations education agency known as UNESCO even has planetary sex-ed standards that seek to begin sexualizing and grooming children for perversion at age five. This is a national and a global phenomenon, and it is only getting worse.

In a newly released Special Report on education, this magazine exposes just how deep the rot goes. Not only is the innocence of children being systematically shattered by the education establishment, government schools have been weaponized to fundamentally transform America. Children are being indoctrinated against their churches, their families, biblical morality, liberty, nationhood, and reason. They are also being deliberately dumbed down — and this can be shown conclusively, as even whistleblowers from within the system have proven. Get a copy of the Special Report for more details. In this day and age, the only way for parents to protect their children is to remove them from the government’s clutches — and that means getting them out of government schools.

Alex Newman is co-author of Crimes of the Educators, and a correspondent for The New American, covering economics, education, politics, and more. Follow him on Twitter @ALEXNEWMAN_JOU or on Facebook. He can be reached at: anewman@thenewamerican.com

UN LGBT Czar on Indoctrinating Children: “The Younger the Better”