Rallying the Troops, Globalist “Intellectuals” Warn That the EU is “Coming Apart” 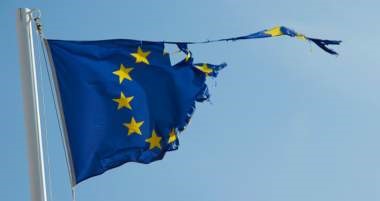 Rallying the Troops, Globalist “Intellectuals” Warn That the EU is “Coming Apart”

“There are some ideas so absurd that only an intellectual could believe them,” observed 1984 author George Orwell. Intellectuals may fancy themselves to have big ideas. But they’re a small constituency, and now a group of them is complaining about the patriotism of a much larger one: the masses opposing their European Union imperial scheme.

Calling them “30 top intellectuals” comprising “writers, historians and Nobel laureates … from 21 countries,” The Guardian informs that they wrote in a “manifesto published in several newspapers, including The Guardian, that Europe as an idea was ‘coming apart before our eyes.’” (It must be nice being able to write what’s essentially a “letter to the editor” and have major media make it big news.)

Regarding the “coming apart” business, no, that sound you hear isn’t the continent cracking up, but globalists. As The Guardian summarizes it, quoting the intellectuals, “Liberal values in Europe face a challenge ‘not seen since the 1930s’ … as the UK lurches towards Brexit and nationalists look set to make sweeping gains in EU parliamentary elections.”

What’s really coming apart is the EU, of course — though the intellectuals use the name not once in the manifesto but instead rebrand it as “Europe.”

Note that the intellectual group includes novelists who, given the manifesto’s melodramatic tone, one could think are doing market research for their next fictional tome.

To wit: “‘Enough of ‘building Europe’! is the cry. Let’s reconnect instead with our ‘national soul’! Let’s rediscover our ‘lost identity’!” the authors write, explaining, “This is the agenda shared by the populist forces washing over the continent. Never mind that abstractions such as ‘soul’ and ‘identity’ often exist only in the imagination of demagogues.”

Now, complaining of “abstractions” is interesting coming from a group that extols “the idea of Europe” and uses the phrase or variations thereof no less than five times in a short piece.

What is the more-equal abstraction? It’s essentially a borderless, polyglot, culturally balkanized European “zone” held together by a central Big Brother, the EU. This is facilitated, of course, by the massive population transfers euphemistically called “immigration.”

Apropos to this, last year French president Emmanuel Macron cited an “Africa expert” who’d said, approvingly, that the number of Africans living in Europe will rise from nine million today to between 150 million and 200 million during the next three decades. Some call this abstraction “Eurafrica.”

Now, this is interesting. Lévy (who counts Karl Marx as an influence) was born in Algeria but lives in France; Rushdie was born in India, moved to the U.K., and now lives in the U.S.; Pamuk was born in Turkey and, while he has taught in the U.S., appears to still live there; Kundera was born in Czechoslovakia but resides in France; while Nobel Laureate Jelinek (who has Communist Party affiliations), quite boringly, was born in Austria and has split her time between Vienna and Munich.

Notable is that three of the above five “intellectuals” are not, in the fashionable liberal usage of the word, “native” to their nations; in fact, they are immigrants. Of course, natural-born traitors abound (Benedict Arnold was an example). Yet there was a time when immigrants wagging fingers and giving lectures about how their new lands must relinquish their sovereignty would have been considered more than untoward. Then there’s Pamuk, who prescribes European national destruction from Istanbul (née Constantinople).

Rushdie’s case is particularly curious, as the 1988 publishing of his book The Satanic Verses inspired then-Iranian leader Ayatollah Khomeini to issue a fatwa on him, “an international call to all Muslims to kill Rushdie,” as Historic Mysteries puts it. He then spent the next nine years in hiding with 24/7 police protection.

Do note that the massive, EU-authored Third World migrations into Europe have led to skyrocketing crime, sexual attacks on women, assaults on non-Muslims, acts of jihad, and the birth of “no-go zones” — and the natives still living in these places don’t enjoy 24/7 police protection.

But I wonder: Do Rushdie, or any of the other “intellectuals,” live with the new arrivals, the enriching vessels of diversity, and in the little Eurafricas metastasizing in some European cities? It’s easy to be idealistic when you don’t have to live with your ideals.

To be clear, some of these Intellectuals™ may mean well. But they’re what G.K. Chesterton would have called philanderers of nations. They’re rooted to no place and, in fact, to nothing substantial — they’re moral relativists (people who deny Truth’s existence).

It’s always amusing, too, when moral relativists lecture about morality. This is precisely what’s happening. In fact, the intellectuals’ message that it’s “wrong” to scuttle the “European idea” sounds like a theological call to arms.

Consider their language. They write that after the defeat of Nazism and the Soviets “there is a new battle for civilization.” “We must now fight for the idea of Europe or see it perish beneath the waves of populism,” they proclaim, otherwise a “politics of disdain for intelligence and culture will have triumphed.” Boy, do I feel stupid.

Moreover, the upcoming election is one they “refuse to abandon to the gravediggers of the European idea,” whose leaders are “false prophets … drunk on resentment” and “arsonists of soul and spirit who want to make a bonfire of our freedoms.”

Speaking of which, perhaps the intellectuals’ most telling line is, “Our faith is in the great idea that we inherited.”

That their faith is not in God is unsurprising but telling. We need man’s institutions — government, for instance — but having faith in them is a different matter. People had faith in Hitler, in Lenin, in Mao, in Pol Pot, in Ho Chi Minh, at least for a time. Only when man’s institutions are guided by men of faith, however, will they not be Satan’s institutions.

As a side note, the term “intellectual” was hardly used as a noun until the 20th century, for at that point a word was needed to describe a man with great learning but little wisdom.