Buzzfeed and Other Media Suffering Financial Woes, Scrambling to Survive 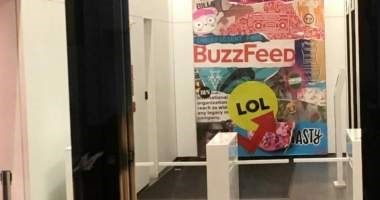 Buzzfeed and Other Media Suffering Financial Woes, Scrambling to Survive

At the same time that many media organizations have hitched their wagons to a rabid anti-Trump narrative, many of them are struggling to survive. Advertising revenues — once the bread and butter of both print and online media — have dwindled in recent months and years. That and other problems have led some big names in media to cut expenses, including laying off sizable portions of their employees. Some are also looking for other ways to generate revenue.

Advertisers have to choose where to spend their money, and when an online media outlet can’t cover expenses with their cut of those advertising dollars, they have to make a decision about whether to charge visitors to their sites a subscription fee (called a paywall), cut their workforce, or both.

The online publishing world is extremely competitive and is dominated by a handful of tech giants such as Facebook, Google, and Twitter. With many companies deciding to spend large portions of their advertising budgets with the giants, there is increasingly less and less left over for everyone else. But that alone does not account for the slide into the financial abyss some online media companies are experiencing.

A basic rule of all advertising is that companies spend their advertising dollars where there is a good return on that investment. In simple terms, that means that a company looks at sales generated by ads placed on a particular site. It’s a numbers game: A site with more traffic will tend to generate more sales. Declining traffic leads to declining sales, and advertisers look elsewhere when placing ads.

One factor in traffic for news sites in particular is whether prospective visitors consider a site to be reliable. A site that is considered “fake news” will have lower — and lower quality — traffic. Given that reality, a site such as Buzzfeed — which has twice been caught running fake articles about President Trump — can expect to find itself fighting to stay afloat.

So it is no wonder that the Wall Street Journal is reporting that “BuzzFeed is planning to lay off about 15% of its workforce, according to people familiar with the situation.” In fact, Buzzfeed has never actually been financially successful. According to the Journal piece, the layoffs are part of a bigger plan “to get BuzzFeed on the path to profitability and in proper shape as it scouts out potential merger combinations with other digital media players,” and “to help the company avoid raising money again.”

The reference to “raising money again” is due to the fact that Buzzfeed — which has been around since 2006 — has been through several rounds of raising money to keep it operating. In 2011, Buzzfeed launched Buzzfeed News as a way of expanding past the site’s staple of inane online quizzes. But that expansion required more money.

In August 2014, after numerous previous rounds of raising funds, the site raised $50 million from venture capital firm Andreessen Horowitz. Then, just four months later, in December 2014, the site had to raise another $50 million by selling secondary stock to growth equity firm General Atlantic. Doubling those fundraising episodes, Buzzfeed again continued the trend in August 2015, when NBC Universal made a $200 million equity investment in the company. So, setting aside previous episodes of raising smaller amounts, Buzzfeed was forced to raise $300 million in a single year. That last influx of $200 million seemed to hold the company for a while, because Buzzfeed didn’t need to return to the trough for just over a year. Then, in October 2016, the site went back to NBC Universal for another $200 million.

While Buzzfeed may be proficient at raising funds to help with expansion and keeping the doors open, the more that half a billion dollars it raised over two years was apparently not spent improving the journalistic end of the company. Because in October 2014 — while the site was in the midst of raising $200 million of the money it needed to survive — a Pew Research Center survey showed that the majority of people in the United States, regardless of their political affiliation, considered Buzzfeed to be an unreliable source of news. The following year, in June 2015, another Pew survey showed that among Millennials, Buzzfeed was considered among the least-trusted sites for news. And that was more than a year before Buzzfeed was in the habit of publishing fantastic articles claiming that President Trump was the victim of blackmail at the hands of, and at the same time, the beneficiary of political help from, Russian intelligence agencies and ordered his lawyer, Michael Cohen, to lie to Congress about his dealing with Russia.

On a side note, CNN — who regurgitated both of those stories as if they had merit — published a snarky article about Buzzfeed’s fundraising in August 2014, ending with “BuzzFeed will also expand its video unit, henceforth known as BuzzFeed Motion Pictures. The unit recently moved onto a 45,000-square-foot lot in Hollywood — not bad for a site sometimes stereotyped as a home for cat videos.”

Now, as the Journal is reporting, Buzzfeed is again struggling and wants to avoid having to (read: probably realizes it can’t) raise more money and will be laying off about 250 employees. This is not the first time Buzzfeed has sent employees packing in an effort to keep its head above water, but it does mark the largest of those layoffs.

And Buzzfeed is not alone. As the Journal piece stated:

There are signs of growing pressure in the industry. The online publisher Mic recently agreed to sell itself to women-focused publisher Bustle Digital Group for about $5 million. Refinery29, the lifestyle-focused publisher that targets millennial women, laid off 10% of its workforce last fall.

And while Bustle Digital Group (BDG) may have the available funds to purchase failing online media companies, it is not without its own problems. For instance, after acquiring the failed and shuttered website Gawker in July of 2018 for the bargain-basement price of a little less than $1.5 million, BDG began the process of relaunching it in early 2019. Carson Griffith — who describes herself as a “girl writer with a boy name” — was hired as the new editorial director of the site. She then hired Maya Kosoff and Anna Breslaw as the only two full-time writers on the new Gawker 2.0 staff. They were hired on January 16, 2019. They both quit one week later, saying that Griffith was creating a toxic work environment with her lewd and insensitive workplace comments and behavior.

When Kosoff and Breslaw took their complaints to HR, they were dismissed and no action was taken. They quit, refusing an opportunity to be moved to other websites within the company, and also refused a severance package that included a non-disparagement agreement, according to the Daily Beast. The pair released a statement, saying, “We’re disappointed it ended this way, but we can’t continue to work under someone who is antithetical to our sensibility and journalistic ethics, or for an employer [CEO Bryan Goldberg] who refuses to listen to the women who work for him when it’s inconvenient.”

So much for BDG being a “women-focused publisher,” unless all that is meant by that is that BDG focuses on marketing itself to women. The fate of Gawker is uncertain, but it is hard to imagine the site — already tainted by lawsuits and other legal troubles leading to its 2016 closing and bankruptcy — will bounce back from being outed as anti-female by two female writers.

Other big names in liberal journalism are facing similar hardships. In a separate article, the Journal reported that Condé Nast — which owns The New Yorker, Vanity Fair, Wired, Vogue, GQ, Bon Appétit, Glamour, and other well-known magazines — will be putting all of its titles behind paywalls by the end of 2019. There will also be an increase in the price of subscriptions. The New Yorker’s regular renewal price for a print and digital bundle is going from $119 a year to $149.

And Verizon Media Group is laying off seven percent of its workforce — roughly 800 employees. Verizon Media CEO Guru Gowrappan (this writer is not calling him a guru — that is his actual name) issued a statement to employees, saying that as part of a “strategy that will propel Verizon Media” including “ambitious but achievable goals that poise [the company] for growth,” Verizon Media had made “difficult decisions” that “will impact around 7% of our global workforce across the organization.” The statement went on to say that “these decisions are being made to streamline resources and invest in opportunities that will help us grow.”

The Verizon Media Group includes media properties, advertising and technology. The division formed in November to encompass Oath, the result of a merger between Yahoo and AOL under the Verizon brand. Some of the popular properties under the umbrella include Yahoo, HuffPost, and Tumblr.

The division has come under pressure recently, as Verizon and CEO Hans Vestberg seek to save $10 billion in cash by 2021. Verizon took a $4.6 billion write-down on its media business, revealing in a December regulatory filing that the segment wasn’t as valuable as it previously thought.

It is simple math that laying off 800 employees to save the $10 billion a company needs to survive is not a recipe for growth; it is the corporate equivalent of circling the wagons while claiming you are moving forward down the wagon trail.

While there is no clear direct line between the over-the-top, anti-Trump rhetoric spewed by liberal media and the financial woes many of them are facing (commonality is not causality), it is difficult to ignore the commonality. Especially where Buzzfeed is concerned.

Having left no stone — real or imagined — unturned in their frenzy to dump Trump, they are now facing the fact that he is still doing well and they are floundering.