Deep Dive Into the Deep State 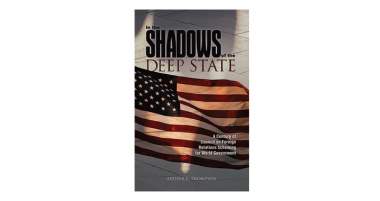 Deep Dive Into the Deep State

In the Shadows of the Deep State: A Century of Council on Foreign Relations Scheming for World Government, by Arthur R. Thompson, Appleton, Wisconsin: Western Islands, 2018, 364 pages, softcover.

Yes, Virginia, there is indeed a Deep State. The orchestrated chaos surrounding the 2016 presidential campaign and the unprecedented, all-out effort of the entire American establishment — media, politicians (of both parties), Wall Street, Hollywood, academia, federal bureaucracy, intelligence agency heads — to enthrone Hillary Clinton and defeat Donald Trump awakened millions of Americans to this fact. The ongoing, relentless, treasonous campaign by the same forces to defame, harass, hamstring, impede, prosecute, and impeach a duly-elected President Trump has confirmed this fact to additional millions. Yes, there is a Deep State, a shadowy cabal of insiders who, for decades, have been operating as the de facto government of the United States, regardless of whether Republicans or Democrats are in power.

The past two years have brought forth a deluge of books, articles, and YouTube videos on the subject, dramatically increasing public awareness of the coordinated forces operating behind the scenes to topple the president and subvert our constitutional order. Unfortunately, many of these efforts, even while providing useful information, suffer from defects. Perhaps the most common defect is to identify the “Deep State” or “the Swamp” with former presidents Barack Obama and Bill Clinton, and desperately wannabe-president Hillary Clinton. For many of these analysts, the Deep State is a partisan thing, a creature of the Clintons, Obama, and the Democrats. Other Deep State critics hit a bit closer to the mark, citing the entrenched power of Wall Street bankers, George Soros, and the military-intelligence-industrial complex. Others strike even closer, pointing out that it is organ­ized “globalists,” the “internationalists,” who are furiously attacking Trump.

But, why are the globalists attacking him so ferociously? Because of his nationalist “America First” agenda, which, if faithfully implemented, would upend decades of steady globalist plodding toward their vaunted “New World Order.” Who are these “globalists” who are so often mentioned but rarely named? Curiously, with few exceptions, most Deep State critics fail to identify the key globalist members of the Deep State and the key organizations that have created its structure and planted their members in vital operational positions. James Comey, Robert Mueller, Peter Strzok, Rod Rosenstein — these are merely Deep State factotums, minions, not real Deep State movers and shakers. Foremost by far among the organizations most closely associated with the Deep State is the Council on Foreign Relations, commonly known by its members, friends, and foes as the CFR. As the premier organization promoting world government for the past century, the CFR has made glob­alism the byword that it is today. And its members, operating from the White House and top Cabinet posts, have implemented CFR globalist policies as our nation’s official policies, with the inevitable (and intended) consequence that we have become more and more entangled in sovereignty-destroying regional and global arrangements. Criticizing the Deep State while failing to note the CFR’s central, crucial role in this decades-long Deep State subversive proc­ess is akin to writing a supposed exposé of organized crime in America and never mentioning the Mafia! If the globalist malefactors remain nameless and their criminal actions are not specifically exposed, they have very little to fear from rants against the Deep State and globalism.

Arthur Thompson does not hesitate to name names and expose the globalists’ criminal actions.

In the Shadows of the Deep State shines a timely and much-needed searchlight onto, as the subtitle says, “A Century of Council on Foreign Relations Scheming for World Government.” However, Thompson, CEO of The John Birch Society, does more than merely chronicle the malignant influence of the CFR over the past 100 years. Those who have read his massive tome To the Victor Go the Myths & Monuments know that Thompson has done extensive historical research into the revolutionary socialist and communist movements of the 18th and 19th centuries, as well as parallel studies of the elites who have supported these movements. He weaves threads of this earlier volume into this present study, demonstrating that as important as the CFR is currently in the globalist scheme of things, it is merely the publicly visible brain hub of a much larger, shadowy conspiracy that extends back prior to the Council’s incorporation in 1921.

Many Americans became aware of the existence of the CFR and its place in the Deep State, long before the latter term was even coined, through the educational efforts of The John Birch Society. Among the books distributed by Birchers were The Invisible Government by Dan Smoot, The Naked Capitalist by W. Cleon Skousen, None Dare Call It Conspiracy by Gary Allen, The Shadows of Power by James Perloff, The Insiders by John F. McManus, and The Creature from Jekyll Islandby G. Edward Griffin.

In the Shadows of the Deep State not only covers the same important ground traversed by those earlier works but brings the story up to date, as well as providing the important 19th-century historical backdrop not contained in the earlier works mentioned above. Thompson traces the influences of the socialist-communist agents in America and Europe, as they labored to subvert and transform society into a “new world order” (the words used by Karl Marx and Frederick Engels) within the framework of the 10 planks of The Communist Manifesto. As Thompson capably demonstrates, this Marxian transformation has been aided, abetted, and directed virtually every step of the way by leading operatives of the Council on Foreign Relations. They have been the chief promoters of every major push to concentrate state power over every sphere of life — first at the national, then regional, then global level — whether it be education, healthcare, taxation, welfare, housing, banking, transportation, energy, trade, etc.

Millions of Americans are angry and concerned over Common Core, the UN’s Agenda 21/Agenda 2030 program, the migration/refugee crisis, our broken borders, endless no-win wars, unsustainable spending and our national debt abyss, our regulatory morass, and sovereignty-destroying/job-destroying trade pacts. All of this, and much more, Thompson shows, should be laid to the blame of the CFR “wise men” (as they refer to themselves), who have been the authors of and instigators of these destructive welfare state/warfare state policies and programs.

In 1975, Rear Admiral Chester Ward, former judge advocate general of the U.S. Navy and a CFR member for 16 years, charged that the purpose of the CFR was to promote “submergence of U.S. sovereignty and national independence into an all-powerful one-world government.” The admiral said that “this lust to surrender the sovereignty and independence of the United States is pervasive throughout most of the membership, and particularly in the leadership.” The damning cumulative evidence, as Art Thompson’s book amply testifies, more than bears out Admiral Ward’s claim. Yet, incredibly, more than 40 years later, the traitors he exposed (or their CFR successors) remain in control. That somewhat changed with the election of Donald Trump — but not entirely. President Trump has appointed a smaller number of CFR luminaries to high official posts than have previous administrations. Some of them he has subsequently fired, but some remain. One of the most troubling of the CFR “remainers” is U.S. Trade Representative Robert E. Lighthizer, the lead negotiator on the U.S.-Mexico-Canada Agreement, the new NAFTA replacement trade deal that is even more dangerous and potentially destructive than NAFTA.

It is not an exaggeration to say that we, as individuals and as a nation, are locked in a life-and-death struggle for survival. The CFR Deep Staters have made it known by their words and actions that the New World Order they are trying to advance intends our “convergence” with Communist China and other totalitarian dictatorships. They have enormous resources and are far advanced on their treasonous scheme, but they are by no means invulnerable. However, if we do not take proper, informed, concerted action, they will succeed. Thompson shows that there are effective actions that every American can take, regardless of individual circumstance, to expose and oppose the Deep State plans for global tyranny. Get this important book, read it — and distribute it to others.

This article originally appeared in the January 7, 2019 print edition of The New American. The New American publishes a print magazine twice a month, covering issues such as politics, money, foreign policy, environment, culture, and technology. To subscribe, click here.

To order In the Shadows of the Deep State, click here.