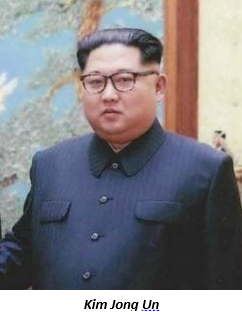 With respect to North Korea’s likely priorities in “The Maybe Summit,” the conventional wisdom continues to dominate what passes for analysis. Nukes are the sine qua non for Supreme Whatever Kim Jong Un because, like his father and grandfather, he equates nukes with his personal security and the preservation of his regime.

For example: “Mr. Kim needs money, investment and technology, for sure. But more than that, he needs to convince North Korea’s elites that he has not traded away the only form of security in his sole control — the nuclear patrimony of his father and his grandfather. For them, ‘getting rich’ is a secondary consideration,” said William Perry, the former secretary of defense and one of the last people to negotiate with the North over peace treaties, nuclear disarmament, and missiles back in 1999, when he was sent out as President Bill Clinton’s special envoy.

“Zero warheads was never going to be on the table,” said Robert S. Litwak, a senior vice president of the Wilson Center for International Scholars. He wrote a detailed study of how to deal, gradually, with defanging the North Korean threat. Naturally, his opinion was: “Mr. Trump needs to move to something closer to the 2015 Iranian deal, which constrained but did not eliminate Tehran’s nuclear abilities.”

Likewise, from Iran nuclear deal maven Wendy Sherman, “it will take technically skilled negotiating teams,” presumably like her and John Kerry, running around in endless “vigorous rings of consultation” to produce orthodox arms control incrementalism, with of course heavy dependence on the UN’s IAEA.

A Clinton Korea expert, former New Mexico Governor Bill Richardson, of the ever-furrowed brow fashionable among diplomatic commentators, has become a bit more optimistic of late that some modest reduction of North Korean nuclear capabilities is possible, provided the “negotiating process” is properly…well, processified, without loutish swinging for the nuclear fences.  Even so, of course, Trump could still screw things up: “His style, his ego…pauses me to think [sic] that he may not achieve what could be achieved for this country and for the world.”

But there may be another way to look at Mr. Kim’s situation. Some observers have suggested that the young Kim’s survival calculus may be different from that of his predecessors, with nuclear arms being a necessary, but no longer sufficient guarantee of dying in his bed. Both Bruce Bueno de Mesquita, an NYU political scientist known for his application of game theory to the analysis of foreign policy issues – including the survival strategies of dictatorial regimes – and Ken Gause, a North Korean expert, have noted:

“North Koreans have been increasingly allowed to operate in capitalist ways. Factory managers and co-operative farmers have more freedom to innovate, as long as they meet their state quotas, and private trade in everything from television sets to chewing gum is now tolerated. A recent study from Seoul’s Korea Institute for National Unification estimated that the North Korean government collects between $13 million and $17 million each day in fees from market traders.

A new class of donju, or ‘masters of money,’ has emerged in this space between state and private activity, using their positions in the regime – many travel to the outside world, where they can trade – to enrich their leader and themselves.”

Based on this line of analysis, economic progress has become every bit as important as nuclear arms in the regime’s survival strategy. “This is his survival code. For Kim, the economic reforms are crucial to keeping power,” says Kim Byung-yeon, a professor at Seoul National University and author of a book on the North Korean economy. Adding that the decision of the North Korean leader to meet Mr. Trump is a strategic ploy to get sanctions relief in order to keep the party going.

“Kim Jong Un’s reputation is relatively good compared with his father,” says Kang Myung Do, a high-ranking defector and son-in-law of former North Korean premier Kang Sung San. “Ordinary people don’t care about him that much. They are OK with him so long as he doesn’t interrupt their market activities and livelihood,” says Prof Kang, who teaches at Kyonggi University in Suwon. Prof Kim puts it even more bluntly: “People appear to be now saying as long as you don’t touch my money, you can rule the country.”

Contrast this approach with the conventional wisdom:

“North Korean leaders are determined to stick to their nuclear development, and see nuclear weapons as the major guarantee of their security. There is no form of pressure that can convince them to budge on this, no promise that will seduce them into they believe that without nuclear weapons they are as good as dead. That’s a disaster for the region, but a perfectly logical choice by the Kim family.”

It is difficult to square the traditional view with certain novel elements of Kim’s policy, namely, an apparent shift in patronage away from military and towards economic elites: “His rule has been marked by the unprecedented purges in the military and police. Prominent generals have been disappearing one after another, and some top commanders, including a chief of the general staff, as well as a minister of defense, have been executed.”

“Mr Kim [is] ‘only killing people [holding] guns’. He has not touched a single economy manager. If you are a bank manager, you are safe. In six years, he has had seven ministers of defence, which is as many as his father and grandfather [Kim Il Sung] had combined in 60 years… Mr. Kim further weakened the power of the military hierarchy by transferring rights to operate foreign currency-earning businesses away from certain generals back to the ruling Workers’ party, according to [a defector] who formerly served in the North Korean army.”

It is possible that Kim’s little-noticed claim that North Korea has completed its “state nuclear force” may be his justification for a shift in priorities. Nuclear weapons might threaten the outside world, but are of little value against a revolt fueled by the rising expectations of new moneyed elites in North Korea. This shift, and the attendant complications it introduces, could be the opening Messrs. Trump, Pompeo, Bolton, and U.S. ambassador to the Philippines Sung Kim have recognized and are seeking to exploit in the North Korean negotiations.

Liberty Nation is part of a community of like-minded thinkers.  For reliable news and commentary, our go-to sources are WhatFinger.com and CNSNews.com

-Published with Permission of LibertyNation.com–