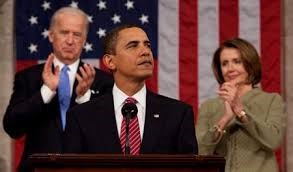 In an astonishing display of arrogant disregard for the Constitution and its protections, James Clapper unapologetically announced that he spied on President Trump to protect him – REALLY?? Just how stupid do Obama’s sycophants think we are?

The entire Mueller investigation designed to destroy President Trump has boomeranged onto its blatantly anti-Trump team of “investigators” exposing their malice, contempt, and staggering improprieties. Their malfeasance is a continuation of Obama’s egregious politicization of the DOJ, FBI and State Department.

The question for America is “Should we be surprised?” I don’t think so.

When Obama promised to transform America most Americans imagined a better life of peace and prosperity in our republic. They did not envision the foundational principles of the Constitution being shattered in an unprecedented power grab to replace our national sovereignty and Constitutional infrastructure with collectivism and global governance. Lying, spying, and propagandizing are not the tactics American citizens expect the US government to use on Americans! Foreign enemies? Yes. American citizens? ABSOLUTLY NOT!

In a stunning 6.8.18 article KrisAnne Hall describes how Obama changed all that. Richard Stengel, Obama’s head of the office for Public Diplomacy and Public Affairs at the State Department from 2013-2016 supports the use of “fake news.” WHAT??? Stengel unapologetically announced to the Council on Foreign Relations Forum that he is not against propaganda. “Every country does it, and they have to do it to their own population, and I don’t necessarily think it’s that awful.” Really Mr Stengel?? Most Americans would disagree with you. Most Americans do not want or expect to be propagandized by their government. Most Americans expect honesty and transparency from those elected to serve them.

Stengel’s egregious condescending attitude was part of Obama’s transformation-of-America policy. In 2013 Congress passed the mendacious Smith-Mundt Modernization Act that overturned the 1948 Smith-Mundt Act prohibiting the domestic dissemination of US government-produced propaganda. The “modernization” was disingenuously hidden in the National Defense Authorization Act Fiscal Year 2013 as if it was protective of Americans!

Jeff Powers explains, “Let’s be clear, the original law prohibited US organizations from using state resources, including the intelligence community, to influence public opinion of United States citizens. Obama’s reform to the Smith-Bundt Act allowed the American public to be a target audience of US government-funded information campaigns.” Government-funded information campaigns are just another name for government-produced propaganda.

So, Fake News not only exists – it was launched, legitimized, and legalized  under Barack Hussein Obama! KrisAnne Hall writes, “The Smith-Mundt Modernization Act not only legitimized the heinous manipulation of mainstream media, but also allowed Congress to fund it with taxpayer dollars.”

The fact that the Smith-Mundt Modernization Act was a bipartisan success is irrelevant because RINOs in Congress, led by John McCain, are globalists and as hostile to government transparency as Obama’s minions.

The current Mueller investigation has revealed that the US entered a new period in American history on November 8, 2016 launched by the inability of the Obama/Clinton Democrats to accept the results of a presidential election. This is no small thing. What distinguishes our republic from tyrannical governance in the world is the public acceptance of election outcomes. We play by the rules. Without rules there is only anarchy and violence. Coups are for other countries – not for America.

So what is Obama’s disingenuously labeled “Resistance” movement? It is the aftermath of a lost election and is Obama’s “soft” coup attempt to destabilize and overthrow duly elected President Donald Trump. It is an egregious anti-American movement by Obama and his sycophants using weaponized legalized propaganda for the kill – brute force without bullets. This is how it works.

Here is the problem, Obama’s “modernization” of the Smith-Mundt Act in 2013 legalized overseas BBG broadcasting in America. In clear violation of its charter stipulating accurate, objective, and comprehensive news Voice of America vilified President Trump and Bernie Sanders in partisan support for Obama’s legacy candidate Hillary Clinton. Obama’s modernization politicized the BBG to use for his personal political advantage. In 2017 Barack Obama replaced the 9 member board of the Broadcasting Board of Governors with a CEO appointed by Obama and allowed VOA to broadcast its politicized messages directly to American audiences.

The Voice of America (VOA) website self-describes as “a dynamic international multimedia broadcaster with service in more than 40 languages. Serving an estimated weekly global audience of 236.8 million, VOA provides news, information, and cultural programming through the Internet, mobile and social media, radio, and television. VOA is funded by the US government through the Broadcasting Board of Governors. The VOA began broadcasting in 1942 to combat Nazi propaganda with accurate and unbiased news and information. Ever since then, VOA has served the world with a consistent message of truth, hope, and inspiration.”

“U.S. President-elect Donald Trump was not the only presidential candidate vilified with hit pieces and biased, one-sided reporting at U.S. taxpayers’ expense on U.S.-taxpayer-funded ($224M FY2017)  Voice of America (VOA) in violation of VOA’s own Charter. Under the leadership of Broadcasting Board of Governors (BBG) CEO and director John F. Lansing, who lacks experience in U.S. international broadcasting, U.S. government operations, and U.S. public diplomacy, and Voice of America director Amanda Bennett, who in her post-election note to VOA staff would not even acknowledge Trump’s victory or mention his name, the Voice of America also produced anti-Bernie Sanders programs during the primaries.”

It is chilling to understand the depth of Obama’s abuse of power while in office. America’s community organizer-in-chief kept his treasonous promise to transform America. He transformed the State Department, FBI, DOJ, Treasury, and broadcasting communities into politicized enforcers of his radical left wing narrative. He transformed real news into fake news and non-partisan government agencies into partisan institutions. Obama obliterated broadcasting oversight by replacing the Broadcasting 9-member Board of Governors with his own appointed CEO.

The election of President Donald Trump crippled Obama’s “transformative” power grab. As President Trump continues to erase Obama’s destructive legacy and Make America Great Again, he must reinstate the protections of the original Smith-Mundt Act that protected Americans against state-sponsored propaganda. The Broadcasting Board of Governors must be returned to the 9-member panel it was before Obama’s “modernization” destroyed its integrity to help restore a standard for real news.

Lying, spying, and propagandizing may be Obama’s way but it is most definitely not the American way!