GOING AFTER OUR FOOD SUPPLY 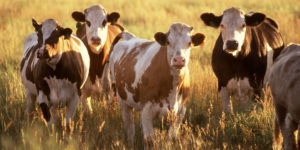 GOING AFTER OUR FOOD SUPPLY

A couple weeks ago, Tom DeWeese sent out a letter about the World Wildlife Fund and beef. It reads in part:

The World Wildlife Fund (WWF) is one of the top three most powerful, radical, anti-free enterprise, UN environmental groups in the world.

And WWF has succeeded in taking over the American Cattle industry!

The WWF has forced cattlemen to follow radical Sustainable rules through the establishment of the Global Roundtable for Sustainable Beef.

They are getting away with this industry grab because the National Cattlemen’s Beef Association is now under the control of the World Wildlife Fund.

And the WWF’s Sustainable Roundtable now controls the beef packing industry which in turn controls the entire beef retail market. Cattlemen either toe the WWF dictates or are cut out of the industry.

That means cattlemen must follow massive regulations in order to produce American beef.

These rules ignore that fact that American cattlemen have always produced the highest grade of beef in the world – simply by using a process that has been used by their forefathers for generations.

The real result of these rules isn’t to produce a better beef product – but to destroy small producers and drive the industry to the massive corporate farms that can afford to play ball with the World Wildlife Fund.

Eventually, the WWF goal is to destroy the entire beef industry.

The World Wildlife Fund has openly stated its opposition to beef production. They insist that to “Save the Earth it is demanded that we change human consumption habits away from beef.”

Here is what they said in a recent WWF report:

“Meat consumption is devastating some of the world’s most valuable and vulnerable regions, due to the vast amount of land needed to produce animal feed.”

This is the growing threat of Agenda 21 and Sustainable Development and its stated purpose to “reorganize human society.”

And this is how they do it – one industry at a time.

In 1992, I wrote the following article for Putting People First, an organization I founded to combat the lies and aims of the animal rights movement. Animal rights is a false front; it is an attack on humans while pretending to care about animals. The leaders have no use for animals other than to change our culture and control our food supply. Many environmentalists and animal rightists go back and forth across the line that might separate them. For example, Paul Watson looked into the eye of a dying whale and saw that the whale “had pity for us.” Many ALF (Animal Liberation Front) ELF (Earth Liberation Front) members are the same people; terrorism on behalf of animals is as comfortable for them as on behalf of Gaia/mother earth.

During the past two years, Putting People First has reported on arsons, bombings and attempted murder by “animal rights” activists. Our exposure of their terrorism has helped awaken the public to the true agenda of what we call the animal cult.

But as the morally bankrupt ideology of animalism has been exposed, its apologists have gone to ground, seeking cover under the more publicly-acceptable guise of “environmentalism.”

However, we also oppose attempts to remove people from the natural equation. We believe that only man can use science, reason and common sense to husband animals and other resources to the benefit of people, animals, and our common environment.

Jeremy Rifkin’s new vegetarian manifesto Beyond Beef hides its message behind a pseudoenvironmentalist facade. The supposedly “mainstream” Chesapeake Bay Foundation shared the podium with PeTA at “Vegetarian Expo ’92.” The radical Humane Society of the United States now calls its school-infiltration arm the National Association for Humane and Environmental Education. And the terrorist manual A Declaration of War by “Screaming Wolf’ is subtitled “Killing People to Save Animals and the Environment.”

I think the clearest example of the unity of environmentalism and animalism is the close relationship between the terrorist Animal Liberation Front (ALF) and the “ecotage” group Earth First! These groups have been working together at least since 1987, when arsons at a California meat processing plant and livestock facility were claimed as joint ALF/Earth First! actions.

Since then. Earth First! Journal has published several laudatory articles about ALF, including one featuring Rod Coronado, the FBI’s leading suspect in several recent arsons. The March 1992 issue carried a terrorist “how-to” article with the ALF byline. The Journal is best known for trying to recruit “terminally ill AIDS patients” for “eco-kamikazee missions.”

Earth First! founder David Foreman is the former chief lobbyist for the Wilderness Society. He says, “Mankind could go extinct and I for one would not shed any tears.” Regarding the Ethiopian famine, Foreman gave this advice: “The worst thing we could do in Ethiopia is give aid. . .. The best thing would be to just let nature seek its own balance, to let people there starve.”

“As radical environmentalists, we can see AIDS not as a problem, but as a necessary solution,” says Foreman. “AIDS is a good thing, because it will thin out the population,” he adds. “If the AIDS epidemic didn’t exist, radical environmentalists would have to invent one.” And indeed, Earth First! Journal has solicited donations toward the development of what it calls “a species-specific virus to wipe out the human race.”

Foreman’s magazine Wild Earth recently opined that “phasing out the human race will solve every problem on Earth, social and environmental.” Foreman is not alone in this opinion. “Somewhere along the line—at about a million years ago, maybe half that—we quit the contract and became a cancer. We have become a plague upon ourselves and upon the earth,” writes David Graber, a biologist with the National Park Service. “Until such time as Homo Sapiens should decide to rejoin nature, some of us can only hope for the right virus to come along.”

Earth First! is best known for tree-spiking, although four of its leaders were recently convicted of conspiracy to sabotage a nuclear power plant in Arizona. Two Earth First! members, Judi Bari and Darryl Cherney, were seriously injured when a bomb they were transporting exploded prematurely in Bari’s car in Oakland, California. B­ari and Cherney’s legal fees were paid by Greenpeace, on whose board sits Earth First! co-founder Michael Roselle.

Sierra Club lobbyist David Brower openly defends Earth First!, saying, “They’re not terrorists. The real terrorists are the polluters, the despoilers.” Brower argues that childbearing should be “a punishable crime against society unless the parents hold a government license.” All potential parents, he says, should be “required to use contraceptive chemicals, the government issuing antidotes to citizens chosen for childbearing.”

In 1992, the National Cattlemen’s Association (NCA) was run by true pioneers and American patriots. Like many organizations that represent meat, milk, circuses, rodeos, zoos, medical research, wool, leather, fur, silk, and pet ownership, the NCA has been co-opted one way or the other to turn it’s back on those who they represent; those who built and feed America.

As you can see, both animal rights and the so-called environmental movement are not friends of humans, animals, or the earth. But they are double-teaming us to take away our rights and freedoms.

-Published with Permission of AmericanPolicyCenter.org-