Does the Constitution Allow Trump to Build the Wall Without Congressional Approval? 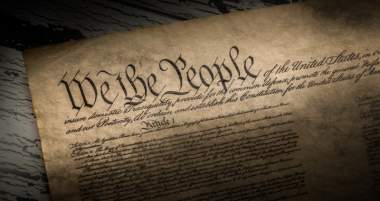 Does the Constitution Allow Trump to Build the Wall Without Congressional Approval?

With President Donald Trump and the Democrats in Congress locked in a fight over whether to fund a wall on the southern border of the United States with Mexico, a dispute that has led to a partial shutdown of the federal government, Trump told reporters in the Rose Garden on Friday at the White House that he could build the wall even without congressional funding.

When he made his comments, Trump had just finished meeting with congressional leaders for more than two hours in a vain effort to make a deal to have his request for $5.2 billion funding for a border wall included in a continuing resolution to continue funding activities of the federal government.

Trump’s reference to a presidential declaration of a national emergency in response to the reporter’s query is to authority that Congress has given presidents — a lump sum of money that Congress had left to the president’s discretion by a 1950 law for use in times of “national emergency.” The law specifically mentioned civil defense situations in a war situation, but also for response to natural disasters such as tornadoes, hurricanes, and earthquakes. According to the statute, the president can declare a national emergency, or disaster, and gain access to funds Congress has appropriated for that purpose.

“We could call a national emergency and build it very quickly, and it’s another way of doing it,” Trump said, adding, “If we can do it through a negotiated process, we’re giving it a shot.” He insisted that he was not threatening to do so, saying, “I’d never threaten anybody, but I am allowed to do it. It’s called a national emergency.”

Trump appears to have hardened in his determination to build the wall, saying that he was willing to allow the partial government shutdown to continue for up to a year, if necessary, should the Democrats refuse to make a deal on border security funding. “I don’t think it will,” he added, “but I am prepared, and I think that I can speak for Republicans in the House and Republicans in the Senate. They feel very strongly about having a safe country.”

“This should have been done by all of the presidents preceding me,” Trump continued. “We’re not playing games; we have to do it.”

“We have to get a structure built,” Trump said, although he added he would be willing to have a “steel wall” instead of a concrete wall, because with a steel wall, Border agents could see through it and observe what is happening on the Mexican side, and steel would probably be stronger than concrete.

“We have to get a structure built,” he reiterated.

Certainly, a case can be made that, with increasing waves of caravans of foreign migrants attempting to enter the United States, by force if necessary, that the United States faces a national emergency situation. But does this give the president the constitutional authority to build a physical barrier on our southern border to protect the nation from this invasion, in the absence of a congressional appropriation? In fact, Article I, Section 9 of the Constitution is explicit: “No money shall be drawn from the Treasury, but in Consequence of Appropriations made by Law.”

But is it that simple? In President Thomas Jefferson’s first message to Congress, he demonstrated his commitment to a strict construction of the Constitution by asking Congress to appropriate “specific sums to every specific purpose susceptible of definition.” This proved extremely difficult, however, and eventually decided that “too minute a specification has its evil as well as a too general one.”

As already mentioned, in 1950 Congress opted to give some funds to the president to use at his discretion in times of national emergency. Combined with other provisions of the Constitution, the present situation on the southern border has created a very interesting and serious constitutional question.

Then there is the presidential oath, in which the new president swears to execute the office (in other words, enforce the laws, including the Constitution) and further to “preserve, protect and defend the Constitution of the United States.” Because of these words, it is the solemn obligation of the president (as well as members of Congress and the federal courts) to follow the duties placed upon them by that Constitution. In this regard, Article IV, Section 4, of the Constitution dictates some of the obligations and duties of the federal government toward the member states of the U.S. “The United States shall … protect each of them [the states] against invasion.” This duty belongs not just to the Congress, but also to judicial and executive branches. As a matter of practicality, it is the executive branch upon whom this duty falls most heavily.

At the Constitutional Convention, the delegates spent much time on the question of war. There was a strong consensus that no president should be able to go to war on his own decision, but rather must have a declaration of war from Congress. However, it was also understood that a president would have both the power and the duty to defend the country in the event of an attack. This was why the delegates changed the word “make” to “declare,” in the final draft. The intent was to allow the president to be able to defend the country without violating the Constitution, in the event of a sudden invasion during a time when Congress was not in session or unable to pass a declaration of war immediately. In the case of building a wall, it could be argued that there has been time for Congress to act.

If a foreign power was attempting to cross either border of the United States, could anyone argue that a president would not be allowed to throw up a physical barrier as part of fulfilling that duty to protect the states from invasion? No one would rationally argue that a president would have to wait until Congress specifically appropriated funds to construct such a barrier. Interestingly, most of those who will argue most strongly against Trump building a wall on his own have had no problem with presidents sending troops thousands of miles away, or bombing foreign nations, all without any congressional authorization whatsoever — despite there being no chance whatsoever that these countries will attack America.

American law has long provided that foreign persons cannot enter the country without permission, and the government has dispatched border patrol agents to prevent such an incursion.

Of course, if Congress were to appropriate money for the specific purpose of building a wall along the southern border to protect the nation from invasion, the constitutionally of the action would be no more in doubt than building a fort on the nation’s border to accomplish the same purpose. But how about funds that are appropriated, but are not specifically designated for constructing the wall? Then there are questions as to whether such funding should come from the Defense budget or from the funds annually appropriated to deal with national emergencies, to be spent at the president’s discretion, under the 1950 law. Certainly, it does seem clear that the president possesses the authority to use at least defense funding to build the wall, so long as that funding is not specifically earmarked for other (non-wall) purposes. After all, if the president may use defense funding to build a fort, then clearly he may use such funding to build the defensive fortification known as the wall.

The actual building of a wall would be complicated by the necessity of purchasing some private land, for example. But, the words of the Constitution make this much quite clear. It is the duty of the federal government to protect each of the states from invasion (whether with or without a wall), and if Congress does not join the president in living up to that obligation, they are derelict in their duty. Whether the invasion is composed of armed soldiers, or caravans of civilians organized for the explicit purpose of entering the country by force, it is still an invasion — and the federal government has an obligation to stop it.