Clinton wants to run Facebook because of power to control news 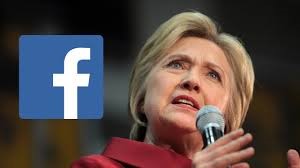 Clinton wants to run Facebook because of power to control news

Just imagine a world where social media news flow would be in sync with fake news CNN, MSNBC and other mainstream media alphabet soup news networks. After two failed presidential runs, Hillary Clinton says she would like to run Facebook, according to Fox News. Would this be a possible nightmare scenario on steroids if she took command of the social media giant?

Stranger things have happened in America, like the election and reelection of Barack Obama, whose only expertise and experience was as a political community organizer on the south side of Chicago. Oh, of course there was his undistinguished time in the Illinois state senate and one term in the U.S. senate. But he still made it to the White House despite all logical odds. So yes, illogical dangerous outcomes can befall America.

So, what would a Clinton Facebook empire look like for average hard-working men and women of America who just happened to be Christian and conservative? For one, every story, post, mention of Christian thought, action or beliefs would be on her prepared hit list. In addition, conservative groups on Facebook would be jettisoned so fast, that what Facebook is doing now to marginalize those same groups would be minor league.

Of course, Clinton, who is still publicly sulking over her 2016 election loss to President Donald Trump, needs to find a way to keep her liberal criminalized media, and political deep state cartel in power. At a recent Harvard University event where she received the Radcliffe Medal for “transformative impact on society,” she stated why she wanted to head Facebook.

Clinton emphasized, that Facebook is, “the biggest news platform in the world … but most people in our country get their news, true or not, from Facebook,” reported Fox News. She added without hesitation the social media behemoth has vast power and controls the flow of information.

It was not enough for the failed democrat 2016 contender to have the mainstream media and its news anchors in her hip pocket and lose miserably. It certainly was not enough for her to have the Obama White House, and a variety of governmental departments doing her sleuthing and bidding. Clinton, who as the nation’s first lady helped her husband’s sexual assaultive behavior be swept under the Oval Office carpet, needs power to fill her soulless pursuit of absolute media power to corrupt absolutely.

Clinton partly admitted it herself in explaining, “It’s the biggest news platform in the world … but most people in our country get their news, true or not, from Facebook,” according to Fox News.

Just in case you may be thinking that this seems a bit farfetched. Consider the fact that according to the Hill the Federal Election Commission data shows that Facebook employees contributed $114,000 to her presidential campaign. This was far more money than to any other candidate, including far left democrat socialist candidate Vermont Senator Bernie ‘Give Away” Sanders.

-Published with Permission of ReNewAmerica.com-