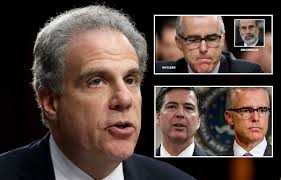 The long-awaited report of the inspector general (IG) of the U.S. Department of Justice was released Thursday, and predictably, it was a whitewash and cover-up.

While making certain factual findings that former FBI Director James Comey was “insubordinate” and that his henchmen such as “lovebirds” Peter Strzok and Lisa Page went after the presidential candidate Donald Trump to prevent him from becoming president, the IG report holds no one accountable to the bar of justice. To add insult to injury, current FBI Director Christopher Wray, a deep state swamp creature, says that all that will come of the IG’s findings is that they will be forwarded to another DOJ agency, the Office of Professional Responsibility (OPR), for possible internal disciplinary action. In common terms, this means that no one will be criminally indicted and that the worst that can happen is that a few sacrificial lambs will be let go.

I have predicted this whitewash and cover-up, while some conservative networks like Fox News hyped the eventual IG report to boost ratings through titillating predictions. Indeed, save for Sean Hannity and Judge Andrew Napolitano, who were skeptical, the network has profiteered from this misleading reporting. But enough with my disappointment that only a few understand the deep state and the D.C. swamp like I do.

Let me now read you the facts of life in our nation’s capital of corruption, infested with establishment hacks of both political parties. The bottom line is that Hillary and Bill Clinton and Barack and Michelle Obama, their FBI director, Comey, their attorney general, Loretta Lynch and their sleazy and corrupt former heads of the intelligence agencies, who not just unconstitutionally spied on President Trump but you and hundreds of millions of citizens, must be indicted, tried and convicted for their crimes against the state. We cannot have a system of justice that protects the elites in the establishment and instead goes after ordinary folk instead.

The IG report exonerates all of these criminals and lets them go scot-free, without legal consequence. And this is the report we all have been waiting for! Give me a break!

Our so-called government, much less the DOJ and its FBI, have become criminal racketeering enterprises that cover up for their own crimes and go merrily along to enrich themselves with power and money, all at the expense of We the People. Just travel to Washington, D.C., these days to see how rich it is and how it continues to expand in every direction. The city has an evil cloud hanging over it, much like Sodom and Gomorrah.

That is why Freedom Watch and I have to assume the role of being your real Justice Department. In this regard, you know me as the only lawyer ever to have a sitting president, Bill Clinton, found liable for a crime. This happened when I ran Judicial Watch, and now it will happen again in spades with strong action by your Freedom Watch.

Not only am I immediately empaneling citizens grand juries in very conservative enclaves like Ocala, Florida, to indict, try and convict the Clintons, Comey, Obama, Lynch and, yes, their corrupt friend Robert Mueller, but we will after they are tried and sentenced take legal steps to enforce the convictions and have them jailed for life.

The time has come for the American people to take their own lawful actions, through citizens arrests and incarcerations – as occurred in the days, months and years following the signing of the Declaration of Independence in my birthplace of Philadelphia and continued for almost a hundred years after the Revolutionary War was won before our now totally corrupt DOJ was created by Congress on July 1, 1870.

What other choice do ‘We the People’ have, when the elite establishment completely perverts our system of justice and protects itself, but persecutes you and your loved ones!

With this phony IG report, rubber-stamped with the seal of approval by our current worthless and compromised Attorney General Jeff Sessions, both the rule of law and our Constitution have been trashed!

In addition to Freedom Watch’s citizens’ grand juries, we also have many other cases to hold the criminals to account. Just one of many examples is a wrongful death suit against Hillary Clinton – which is headed to the Supreme Court – for her criminal use of a private email server that gave up to Muslim terrorists the location at Benghazi of Ambassador Christopher Stephens. This led to his murder and that of undercover agents Ty Woods and Sean Smith. The Wicked Witch of the Left, who was effectively exonerated by the IG report cover-up, must now be legally crushed.

Another example of our uncompromising legal actions is our recent victory in having a court rule that Special Counsel Robert Mueller and his pro-Clinton and Comey leftist prosecutors, all of whom are attempting to take down President Trump, must release their communications with the media. When this happens on Sept. 4, 2018, the date Judge Emmet Sullivan ordered, Mueller will be exposed to having committed the crime of leaking grand jury information, and he will either be fired or have to resign. As a result, the witch hunt to destroy President Trump, his family and his colleagues could be history.

Freedom Watch and I are the only game in town! There is no other, period!

Freedom Watch is what Judicial Watch used to be when I ran it. We bring hard-hitting legal cases, empanel citizens grand juries and take risks like our Founding Fathers did in fashioning a constitutional republic. Like Washington, Adams, Jefferson and Franklin, I pledge my sacred honor, the little I own, and will risk my life to preserve the republic for which these brave men stood.

We need to empanel the citizens’ grand juries and bring one case after another until our nation is restored to greatness and we have a functioning legal system that does not protect the establishment elites at the expense of We the People.

The IG report disgracefully unmasks why the nation needs a powerful Freedom Watch, run by a trial lawyer and prosecutor like myself with 40 years of experience, as we do not have a governmental Justice Department that will protect us and implement the rule of law.

Time is short to save the republic! Go to www.freedomwatchusa.org to enlist in our citizens’ army!