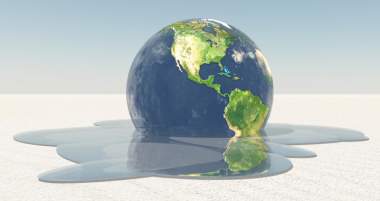 “The science is settled” on the issue of “climate change,” declared NBC’s Meet the Press host Chuck Todd, in introducing a special program promoting only one side of the issue with politicians who included former New York Mayor Michael Bloomberg and California Governor Jerry Brown.

“I would point to the fact that it took Roosevelt many, many years to get America willing to go into World War II and fight the Nazis,” Brown told Todd. “Well, we have an enemy, though different, but perhaps, very much devastating in a similar way. And we’ve to fight climate change. And the president’s got to lead on that.”

Brown did not specifically say who the “enemy” is now, but all the participants in Todd’s program clearly consider those who do not agree with them on the issue of climate change as either the enemy or perhaps collaborators. They often refer to those who do not believe that human industrial activity is having a significant impact on global warming as “deniers” — with an obvious allusion to the Holocaust.

As discomforting as it is to hear Democratic politicians such as Brown and Bloomberg to offer comparisons of today’s “climate change deniers” to Adolf Hitler’s National Socialists, it is not uncommon for such comparisons to Hitler to be made in U.S. political contests. But even beyond the climate change issue, Todd’s decision to not only take sides on the issue, but to declare the contrary position as illegitimate, powerfully illustrates an even larger reality: Todd and many other so-called journalists are not reporters, but seek to make sure one side wins.

“We’re not going to give time to climate deniers,” Todd explained. “The science is settled even if political opinion is not. We’re not going to debate climate change, the existence of it. The Earth is getting hotter and human activity is a major cause. Period.”

Despite years of “climate change” propaganda, a recent NBC News/Wall Street Journal poll demonstrates that Americans remain deeply divided — largely along partisan lines — on the issue. Only 15 percent of Republicans are convinced that climate change is “serious,” requiring “immediate action,” but 70 percent of Democrats are convinced.

And Todd, hosting a news interview show, has made it clear that he not only favors one side of an issue that deeply divides Americans, but he does not view those who hold a different position than he holds on the issue as even legitimate. Their arguments should be ignored.

This is not surprising, as Todd is clearly on the Democratic Party team, even having worked in 1992 on the presidential campaign of Senator Tom Harkin, an extremely liberal Iowa Democrat. Even since taking over the Meet the Press program, Todd has continued to support Democrats. The Daily Caller has reported that Todd and his wife even hosted a dinner party in 2015 for the communications director of Hillary Clinton’s presidential campaign effort. Kristian Todd, his wife, is the co-founder of a political consulting firm, which supports many partisan Democrat campaigns or progressive issues.

Clearly, Todd may want us to think he is wearing the uniform of the umpire, but he is really ready to make a hit for just one team.

As Governor Brown’s allusion to the efforts of President Franklin Roosevelt to persuade Americans to get the country into the war against Nazi Germany demonstrates, liberals believe it is up to them to alter Americans’ opinion on climate change. Interestingly, Roosevelt was never able to convince Americans to go to war against Nazi Germany — Hitler declared war on the United States. War came to the United States on December 7, 1941, when the Japanese bombed Pearl Harbor. That did not put us into the war against Germany, at least not until Hitler decided to honor his alliance treaty with the Japanese and declare war on America. Roosevelt did not even ask for a declaration of war against Germany until they first declared war on the United States. Most historians who have studied this subject believe Congress would not have otherwise declared war on Germany.

While Brown is correct that FDR early wanted to go to war against Germany, America won World War II defeating both Germany and Japan, with weapons of war, even dropping atomic bombs on the Japanese mainland. Obviously, we cannot solve any climate change problem by dropping bombs. (Although back in the 1970s, when the climate change alarmists of that generation thought the problem was global cooling, not global warming, there were suggestions of attempting to raise global temperatures by dropping bombs on the Arctic.)

What does Brown suggest? “We’ve got to get those zero-emission cars on the road. We have to figure out new ways of making cement. We’ve got to clean up our ships, which are creating more pollution than California and Texas put together. The technology, the investment, the lifestyle changes, the land-use changes, this is a revolutionary threat,” Brown declares.

It is certainly “revolutionary.” What Brown and his fellow climate change true believers are advocating is a massive increase in the power of government on a global level. Changing our “lifestyles” will necessitate a diminished level of individual liberty. And it definitely will not mean a higher standard of living, but a lower one. Putting government more in charge in how land is “used” will require more government control over private property.

And apparently, it will require a suppression of the voices of those who believe all this loss of freedom on a global scale is unnecessary. Lack of debate, as advocated by Al Gore and Chuck Todd, is more characteristic of totalitarian systems than a free society.

As Brown stated, it will be “revolutionary.”