Killing Nationalism: Merkel Says Nations Should Give Up Sovereignty 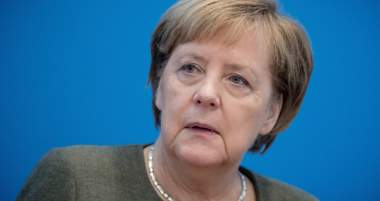 Killing Nationalism: Merkel Says Nations Should Give Up Sovereignty

German Chancellor Angela Merkel (shown) may be preparing to step off the political stage, but she’s apparently going out not with a whimper but a globalist bang. This was signaled recently at an event organized by the Konrad Adenauer Foundation, where the German leader and ex-communist proclaimed, “In this day nation states must today — should today, I say — be ready to give up sovereignty,” according to the Express.

Ah, the difference between “must” and “should”: a spontaneous Freudian slip to the mind and two seconds in a speech — and a whole lot of power in government.

Speaking at the “Parliamentarianism Between Globalization and National Sovereignty” event last month, Merkel impugned “populism” and “suggested countries should [must?] be willing to give up control over their own affairs and let organizations such as the European Union have more power,” as the Express summarized it. The paper called this “a veiled swipe at Brexit.” It was likely that — and more.

Just consider Tyler Durden’s reporting at Zero Hedge on Friday. “‘Nation states must today be prepared to give up their sovereignty,’ according to German Chancellor Angela Merkel, who told an audience in Berlin that sovereign nation states must not listen to the will of their citizens when it comes to questions of immigration, borders, or even sovereignty,” he writes.

“Merkel has announced she won’t seek re-election in 2021 and it is clear she is attempting to push the globalist agenda to its disturbing conclusion before she stands down.”

A main focus of the Berlin event was to discuss ways to “resolve populism” because, of course, that pesky people’s will stuff can impede globalist ambitions. In fact, Merkel said, reportedly within the context of discussing the United Nations Migration Pact, that there were politicians “who believed that they could decide when these agreements are no longer valid because they are representing the people.”

But, rejecting this “nationalism,” she further stated that the “people are the people who live permanently in one country and not a group that defines them as [the German] people,” reports the Konrad Adenauer Foundation (KAF).

However you define “the people,” though, Merkel seems to view them as mere background noise. Consider that the KAF also reports her as saying, as she exalted government, “The heart of democracy is parliament” (not the people?).

That her words have a 1984-ish, “War is Peace, Freedom is Slavery, Ignorance Is Strength” quality reflects inverted morality and thinking and the inverted rhetoric used to sell it. But it’s not the first time she has espoused such dyslexic ideology — and she’s not the only one.

As Durden also tells us, “Merkel has previously accused critics of the UN Global Compact for Safe and Orderly Migration of not being patriotic, saying ‘That is not patriotism, because patriotism is when you include others in German interests and accept win-win situations.’”

“Her words echo recent comments by the deeply unpopular French President Emmanuel Macron who stated in a Remembrance Day speech that ‘patriotism is the exact opposite of nationalism [because] nationalism is treason,’” Durden continued.

So “Democracy is Parliament, Patriotism is Internationalism, Nationalism is Treason.” We thought the new math was bad, but, hey, The Party has spoken.

Unfortunately for Merkel and her fellow travelers, her fracturing of Europe via inundation with unassimilable Third Worlders and Oceania ambitions haven’t played well in Euro-Peoria, which is why she found herself at a conference on how to kill populism (which has killed her political career).

In fact, her name may live in infamy. As Reaction’s Gerald Warner wrote in January, “Merkel, arguably, drove Britain out of the EU. Then her migrant quotas alienated Hungary, Poland, the Czech Republic and Slovakia and put them in serious conflict with Brussels. In German-speaking Europe the same provocation brought the Freedom Party into coalition government in Austria and, at home in Germany, the spectacular electoral success of the AfD paralyzed the tired and discredited Europhile, globalist consensus.”

This is what happens when ideological inversion begets policy perversion. But the German chancellor is an inverted lady. She’s known as “Mama Merkel,” yet she’s childless (which may help explain her urge to “mother” Muslim migrants: misdirected maternal instinct?). She’s also billed as a conservative, but what she aims to conserve is the question.

Consider: Warner also tells us that in 1954, “Horst Kasner, a Protestant pastor of strongly leftist convictions, voluntarily moved from capitalist Hamburg to East Germany, taking with him his wife and weeks-old daughter.”

That daughter would become Angela Merkel.

She followed in daddy’s footsteps, too, learning Russian well enough to win a local Russian-language “Olympics.” Warner’s interpretation of this is that it “was an obvious indication of her ambition: learning the language of East Germany’s Soviet masters would be of considerable advantage in pursuing a career in the Communist hierarchy.”

Warner goes on to cite a 2013 Merkel biography that “exposed her as the former FDJ Secretary for Agitation and Propaganda (‘Agitprop’) at the Academy of Sciences in East Berlin” during Cold War days. Moreover, as “late as September 1989 she said: ‘If we reform the GDR [Marxist East Germany], it won’t be in terms of the Federal Republic [West Germany’s government],’” writes Warner. “Just 14 months later, in November 1990, she entered the Christian Democrat cabinet of Helmut Kohl as minister for family affairs.”

So Merkel’s, let’s say, “principles” were not only quite pliable but subordinated to power lust.

Thus, the tale her past tells is that of a red-diaper baby who grew into a Marxist activist and the last kind of person you want in power: the kind who always craved power.

Why, however, did Merkel orchestrate European demographic disaster? “Because of her Communist past, is the evident answer. Because she could. Because she had the power,” opined Warner. “Once the totalitarian mentality has been embedded in a politician’s psyche, although it may lie concealed for more than a decade of opportunist vote-seeking, image fabricating (the ‘Mutti’ imposture), self-conscious superficial conformity to Western ‘democratic’ totems, the will to exercise power is never extinguished.”

“Hailed as ‘Queen of Europe’, while Merkel counterfeited the humble, shabby Hausfrau, her instincts remained discreetly imperial,” Warner continued. “Hitler always had a portrait of Frederick the Great in his office; Merkel has one of Catherine the Great in hers.”

Yet it’s easy to dismiss the chancellor as a communist — too easy. I suspect the truth is a bit more nuanced. Man’s nature is complex, and a person can pursue something with more than one motivation. Aside from any EU, divide-and-conquer power schemes possibly operative, Merkel may feel, on some level, that she’s doing the right thing; and, of course, people have a great capacity for rationalization.

For sure, though, Merkel is a typical mushy-headed modernist, a relativist, a person so disconnected from Truth that she marries the spirit of the age and ends up a widower in the next — though her penchant appears to be for dark spirits.

Thus did she serve the Soviet empire yesterday and, when the power structure changed, began serving her new master. She didn’t ascend from the Marxist morass; she made a lateral move into a different one.

But the real issue isn’t Merkel, but those who elected her. Getting rid of demon wings is far easier than purging the mentality that was the wind beneath them.