THE PEOPLE UNDERSTAND THAT IF REPRESENTATIVE MATT SHEA IS DENIED HIS RIGHTS THEN THEIR OWN RIGHTS ARE NO LONGER GUARANTEED.

*Editor’s Note: We will continue to update this list to reflect new resolutions passed.

J.T. Wilcox, the leader of the Washington State Republicans has admitted to working with the Democrats in their efforts to oust Representative Matt Shea.

Shea, one of the most effective leaders of the Washington State Republicans battle for Freedom and Liberty, has been under attack from Marxist leaders within his state. These attacks are coming from both the opposing Democrat party and House Republicans, led by Wilcox.

Holding onto the Rampart report for several weeks, Wilcox refused to allow the elected representative access to the information. Wilcox, however, planned ahead and was ready when the report finally became available to the public.

Within minutes of it’s release, Wilcox made an official statement which included, “House Republican Leadership has suspended Representative Matt Shea from the caucus and removed him from his ranking position on the House Environment and Energy Committee. He will also be removed from his House committees.”

Wilcox has repeated his assertion that a large part of his reasoning included Rep. Shea’s not giving a statement to the Rampart Group during their investigation.

“Representative Shea was given an opportunity to communicate with investigators and chose not to.”

I really wish someone would sit down with the House minority leader and explain how the law works. The accused is not required to make a statement. The burden of proof is on the prosecution, in this case the House of Representatives, including J.T. Wilcox. Accusations are not proof of guilt. The whole thing is based on innuendo and rumors. It does not even rise to the level of circumstantial evidence.

Fortunately (for the public as well as Rep. Shea) there are many good people around the state that understand how our system is supposed to work. They read and study our Constitution, something that J.T. should try occasionally.

Many of these folks are elected within their local GOP committees. These Central Committees are invaluable to the elected representatives, and can “make or break” someone’s political career. In many ways, these local groups hold more power than the state level people, including the governor. If they choose not to endorse someone, that candidate would have a very difficult time, in some cases nearly impossible, getting re-elected.

Multiple groups throughout the State of Washington are passing resolutions in support of Rep. Matt Shea. They are united in their belief that Rep. Shea has not been afforded Due Process, and that this is a cornerstone of our Judicial system.

Kitsap County Republicans left no room for doubt as to their position:

Whereas, Amendments V and XIV and of the United States Constitution and Article 1, Section 3 of the Washington State Constitution enshrine and guarantee the right and principle of Due Process of Law;

Whereas, Article 1, Section 10 of the Washington State Constitution guarantees that, “Justice in all cases shall be administered openly, and without unnecessary delay;”

Whereas, Representative Matthew Shea has been the subject and target of a highly biased and demonstrably inaccurate private investigation initiated by the Washington State House of Representatives at the behest of Democrat leadership;

Whereas, House Minority Leader, J.T. Wilcox, received an advanced copy of the investigation report and withheld it from both Rep. Shea as well as the entire Republican Leadership and Caucus;

Whereas, Minority Leader Wilcox announced the suspension of Rep. Shea from the Republican Caucus, his removal from all Committees, the relocation of his legislative office, and the severance of all administrative support for his office within minutes of the public release of the investigation report, and:

Whereas, the complete timeline concerning the public release of the report, Minority Leader Wilcox’s announcement, and follow-on media coverage and events raise the highest degree of scrutiny for the propriety and integrity of the Leader’s actions;

Therefore, be it Resolved by the Kitsap County Republican Party:

1) that all citizens, including Representative Matthew Shea, are to be afforded full rights of due process in any venue, legal or otherwise,

2) that the presumption of innocence must be given AND vigorously defended at all times,

3) that House Republican Leadership has denied Rep. Shea the right of due process and the right of open justice without unnecessary delay,

4) that the KCRP admonishes the actions of House Republican Leadership toward Rep. Shea and demand that he be restored in full to all privileges and rights enjoyed prior to the public release of the investigation report, and

5) that the KCRP calls upon all levels of Republican Leadership and the Washington State Republican Party to stand up for the rule of law and protection of individual rights, and to adopt similar resolutions in this matter.

Several more resolutions have been passed throughout the State:

Grant County Republican Party said they will pull all support from any legislator that supports removing Shea from his office.

Pierce County Republicans are questioning the integrity of J.T. WIlcox, and has said that he has denied Rep. Shea Due Process. They are ready to pull support from any legislator that hampers Shea prior to that being given.

Whatcom County Republicans admonished the actions of the House Leader and are demanding that all of Rep. Shea’s rights be restored to him.

Skamania County voiced there displeasure by demanding the rights of Rep. Shea be reinstated. They are also willing to remove their endorsement of anyone voting to expel Shea.

The Republican Liberty Caucus of Washington State points out that Kathy Leodler, head of the Rampart Group, is a contributor to supporter of far-left democrats and Marxists, and are demanding that Matt Shea be restored his rights.

The Citizens Alliance for Property Rights (CAPR) issued a statement of support for Shea on April 24, 2019. They doubled down on this with a statement on December 23, 2019, as well as issuing a statement today:

*Yakima County Republican Liberty Caucus has passed a resolution in support of Rep. Shea and condemning the actions of the Washington House Republican Caucus Leadership.

*Cowlitz County states that the report commissioned by the Democrat-controlled House leadership omits exculpatory evidence and fails to cite and actual violations. They condemn the actions taken and want Rep. Shea’s rights restored.

*26th Legislative Republicans, citing the US Constitution and Washington State Constitutions, question the integrity of the Leader’s actions. They condemn the actions of Minority Leader Wilcox and and demand that Rep. Shea be restored to full privileges and rights.

*Grays Harbor Republicans, citing the fact that Kathy Leodler, Rampart CEO and author of the report, is a far-left Democrat contributor and Marxist with a political bias, wants Rep. Shea restored to the House Republican caucus and all committee assignments.

*Benewah County, Idaho, Republican Central Committee passed a resolution in support of Rep. Matt Shea and called for an investigation of the Rampart Dossier. Stating that the report included the character assassination of Rep. Shea and others with an intentional coloring towards a predetermined outcome, they want investigations into all aspects of the Rampart report. They also ask for Rep. Shea to be restored to his former good standing.

The people are speaking out, loud and clear. They understand that if Representative Matt Shea is denied his rights then their own rights are no longer guaranteed.

I am told that more resolutions are coming. People from around the country are watching Washington and waiting to see if Due Process is actually gone in this state.

In the following video, Washington State House Leadership, Democrat Speaker of the House, Laurie Jinkins and House Minority Leader JT Wilcox, during their legislative preview in Olympia on Thursday, January 9, 2020.

They say, in no uncertain terms, that they want Rep. Shea to resign or be expelled. Wilcox is asked what he will do if Shea is exonerated. Wilcox clearly does not want to be pushed to say that he will ever allow Shea back into the caucus, as he only concedes that he will have to “reexamine” what they have done. 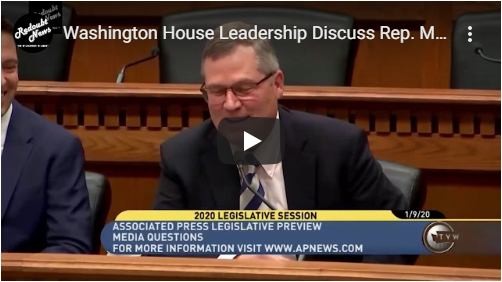