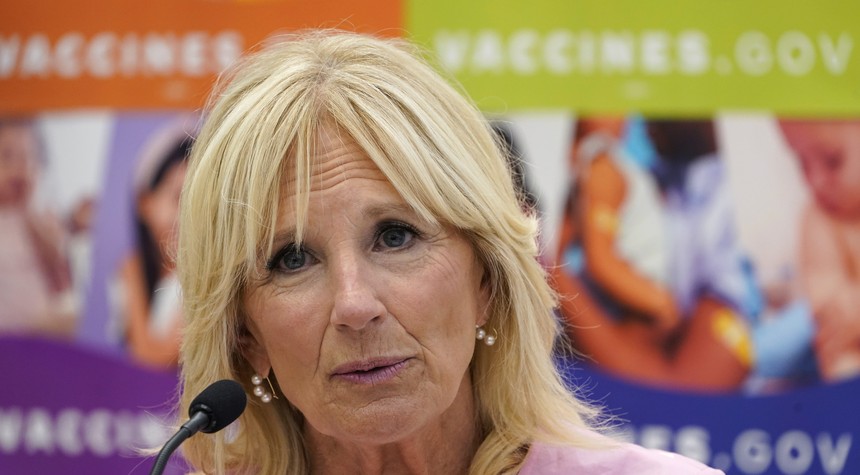 In the ongoing devolution of our once-proud nation into a banana republic where unctuous and unscrupulous “public servants” use the full weight of the state apparatus to persecute their political opponents and call this persecution a campaign against corruption, the U.S. Army has suspended a three-star general from his job advising senior military officers. His crime? Poking gentle fun at that most sacred of sacred cows, Jill Biden, uh, check that, I meant “DOCTOR” Jill Biden; please don’t kick in my front door at four in the morning.

Lt. Gen. Gary Volesky once served as the Army’s chief spokesman. He won a reputation for valor; according to USA Today, Gen. Volesky was a “recipient of the Silver Star for gallantry in Iraq.” Although he is now retired from the Army, he remained connected to the military, serving as a “senior mentor,” which involved “advising senior military officers, staff and students participating in war games and other military activities.”

But now Volesky is no longer working at this $92-an-hour job and is the subject of a military investigation, for he had the temerity to mock she who is not to be mocked, Dr. Biden herself. USA Today noted that Lt. Gen. Theodore Martin, “commander of the Combined Arms Center, suspended Volesky pending the outcome of the inquiry,” but given the circumstances, it is unlikely in the extreme that Volesky will be returning to his job anytime soon. He has crossed a line that must never be crossed.

It all started on June 24, when Jill Biden — sorry, Dr. Jill Biden — tweeted: “For nearly 50 years, women have had the right to make our own decisions about our bodies. Today, that right was stolen from us. And while we may be devastated by this injustice, we will not be silent. We will not sit back as the progress we have already won slips away. Tomorrow, we will continue to fight — for our daughters and granddaughters, and for ourselves — until all women can decide our own futures once again.”

Volesky read this pious Leftist flummery, which repeated for the ten millionth time the false, anti-science claim that abortion involves the mother’s body only, and couldn’t resist a bit of fun at the expense of this absurd posturing. In a tweet that has since been taken down, he wrote: “Glad to see you finally know what a woman is.”

Related: Jill Biden’s Criminal Elder Abuse Is Going to Ruin Us All

Citing unnamed “experts,” USA Today explained that “his response represents a breach of decorum for a retired military officer and a foray into partisan politics by an official on the payroll of the Pentagon, which is supposed to steer clear of such matters.”

Yeah, military personnel don’t get involved in partisan politics. Right. Meanwhile, in June 2021, Army Gen. Mark Milley, chairman of the Joint Chiefs of Staff, told the House Armed Services Committee: “I want to understand white rage. And I’m white. What is it that caused thousands of people to assault this building and try to overturn the Constitution of the United States of America? What caused that? I want to find that out.”

Milley was making several unsubstantiated (at best) assertions, chief among them being the idea that Jan. 6 was an “insurrection” attempting to “overturn” the U.S. Constitution, and that it had something to do with what he referred to as “white rage.” These are common assumptions on the Left, widely rejected among conservatives. But Milley isn’t engaging in “partisan politics.” Oh, no. No one would even dare suggest such a thing.

More recently, a training slide of the same U.S. Army tells soldiers that they have to accept men who are pretending they are women and women who are pretending to be men. The slide states that soldiers must “understand” that “anyone may encounter individuals in barracks, bathrooms, or shower facilities with physical characteristics of the opposite sex despite having the same gender marker.” But that’s not political, either.

The lesson is clear: the only time military officers get political in an unacceptable manner is when they say something that doesn’t conform to the Left’s agenda. When was the last time you heard about a Leftist member of the military being disciplined for political activity? After Roe v. Wade was overturned, woke military personnel openly called into question their own loyalty to the United States. Will they face any discipline? Not on your life.

But Lt. Gen. Volesky, he poked fun at Jill Biden! The Army can’t let that go by. Come on, man! They have standards!

Robert Spencer is the director of Jihad Watch and a Shillman Fellow at the David Horowitz Freedom Center. He is author of 25 books including many bestsellers, such as The Politically Incorrect Guide to Islam (and the Crusades), The Truth About Muhammad and The History of Jihad. His latest book is The Critical Qur’an. Follow him on Twitter here. Like him on Facebook here. For media inquiries, contact communications@pjmedia.com.