Maria Bartiromo Targeted for Challenging the Narrative on Election Fraud 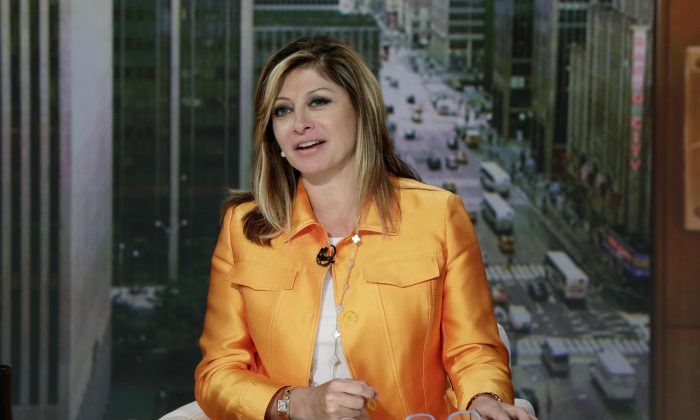 Maria Bartiromo appears on her “Mornings with Maria Bartiromo” program, on the Fox Business Network, in New York, on June 23, 2015. (AP Photo/Richard Drew)

Maria Bartiromo Targeted for Challenging the Narrative on Election Fraud

Because access to clear communications and truthful information is essential to the struggle to defend the republic, media organizations complicit in crimes and abuses committed by U.S. spy agencies and Democratic Party operatives are targeting Fox Business/Fox News journalist Maria Bartiromo. The aim is to damage her reputation and scare off others who might also challenge the consensus shaped to serve the interests of the increasingly powerful U.S. oligarchy.

Articles in the Washington Post and Los Angeles Times published the same day last week joined earlier attacks by CNN and high-profile bloggers at HuffPost, Vox, Business Insider, and elsewhere to signal it was open season on Bartiromo. On their telling, she has lost journalistic credibility by interviewing President Donald Trump and his allies regarding their allegations of election fraud. The immediate goal of the anti-Bartiromo campaign then is to derail her reporting on the widespread irregularities and abuses seen during the 2020 election cycle.

In swarming Bartiromo, the media was in effect defending itself, for it is a central component of the manifest fraud that helped Joe Biden to the White House. America’s founders saw the free press as a key political institution that by informing the public would help ensure the proper functioning of government. Should the press misguide or deceive the electorate, however, voters cannot understand the qualities, characters, and issues that drive the policies deciding how a free people may best live together in peace and prosperity. In the 2020 election cycle, the press was as keen to conceal the candidate’s problems as his campaign was careful to hide his person in his basement.

The media’s fraud against the public was passive and active. It neglected to press Biden on his proposed policies and refusal to disclose important positions—e.g., would a Biden presidency pack the Supreme Court? The media ignored his obviously damaged cognitive abilities, his failure to complete thoughts and remember words. Even more startling, major press organizations and social media platforms coordinated to censor pre-election reports of Biden family entanglements abroad, including allegations of financial arrangements with foreign nationals that touched on vital issues of U.S. national security.

When election day rolled into election week and then election month, and evidence of fraud surfaced, journalists at once prestigious media outlets buried stories they should have reported. Why were Republican election observers shut out of polling places? Were election officials covering windows to hide how ballots were being counted? Why did several states stop counting in the middle of election night, at the same time? Was it in fact the job of the press, as Facebook CEO Mark Zuckerberg said months before the election, to explain away any irregularities that might arise as normal? As a result, the press dismissed any question about the integrity of an election that resembled no other in U.S. history as a conspiracy theory.

To understand the true scope of the media’s fraud against the U.S. electorate, it must be seen as part of a four-year-long campaign to damage Trump at the polls, which began before the last election with the phony Trump-Russia narrative. Maria Bartiromo was one of the first to report on the real scandal behind it.

“I’d been on the story since the Democrats’ July 2016 convention,” she told me for my book “The Plot Against the President.” I’ve known her for several years and have appeared on her show. “There was an announcement on the floor that the Russians had hacked the Democratic National Committee’s emails,” she continued, “and in the next few hours word started getting out that they’d done it to help Trump. This didn’t make sense.”

Because, as she surmised, it wasn’t a real story. As former CIA director John Brennan told Barack Obama at the time of the 2016 convention, the Trump-Russia narrative was a Clinton campaign-sponsored information operation vilifying Trump. At the Democrats’ July gathering, Clinton officials, including Joe Biden’s incoming national security advisor Jake Sullivan, briefed the press on Christopher Steele’s false allegations about Trump aides like Carter Page.

The media outlets now attacking Bartiromo’s journalistic integrity were eager participants in the Clinton campaign’s propagandistic activities. Just before the convention began, the Washington Post’s Anne Applebaum wrote a column pushing the Clinton-funded allegations against Trump, Page, and others. As the convention got underway, then Los Angeles Times columnist Max Boot rehashed the very same Trump-Russia talking points. Boot and Applebaum, renowned foreign affairs experts, were simply shilling for the Clinton campaign, while Bartiromo chased the real story from the beginning.

After the 2016 election, she helped expose that the collusion narrative was an intelligence operation using the press, including those now attacking her, as a platform to undo the will of the American public and unseat the president it had elected. The media’s attacks against a journalist who broke news of a genuine scandal is further evidence that the country no longer has a functional press corps. Rather, the U.S. public must contend with an adversarial communications infrastructure designed to promote the interests of an elite determined to destroy the foundations of the republic.

Lee Smith is the author of the recently published book, “The Permanent Coup: How Enemies Foreign and Domestic Targeted the American President.”