Solar panels generate mountains of waste — and heat the planet 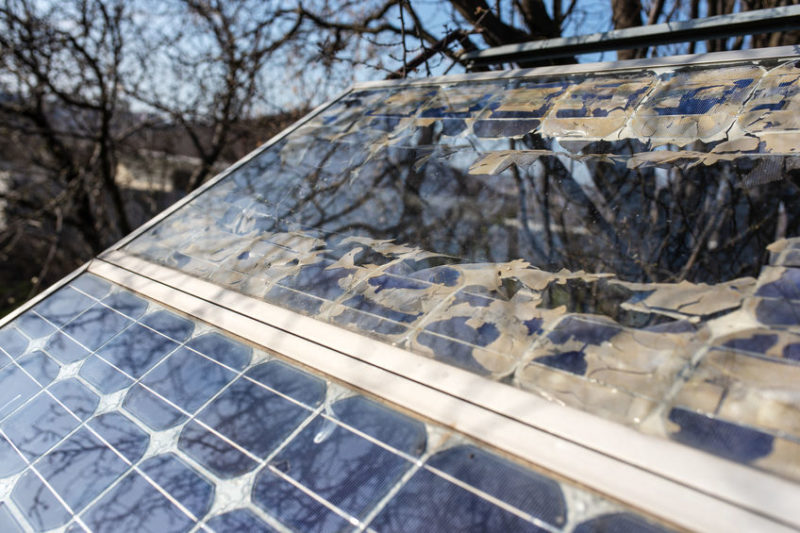 Solar panels generate mountains of waste — and heat the planet

The problem of solar panel waste is now becoming evident. As environmental journalist Emily Folk admits in Renewable Energy Magazine, “when talking about renewable energy, the topic of waste does not often appear.” She attributes this to the supposed “pressures of climate change” and alleged “urgency to find alternative energy sources,” saying people may thus be hesitant to discuss “possible negative impacts of renewable energy.”

Ms. Folk admits that sustainability requires proper e-waste management. Yet she laments, “Solar presents a particular problem. There is growing evidence that broken panels release toxic pollutants … [and] increasing concern regarding what happens with these materials when they are no longer viable, especially since they are difficult to recycle.”

This is the likely reason that (except in Washington state), there are no U.S. mandates for solar recycling. A recent article in Grist reports that most used solar panels are shipped to developing countries that have little electricity and weak environmental protections, to be reused or landfilled.

The near-total absence of end-of-life procedures for solar panels is likely a byproduct of the belief (and repeated, unsupported assertion) that renewable energy is “clean” and “green.” Indeed, Mississippi Sierra Club state director Louie Miller recently claimed that unlike fossil fuels and nuclear energy, “Sunshine is a free fuel.” Well, sunshine is certainly free and clean. However, there is a monumental caveat.

Harnessing sunshine (and wind) to serve humanity is not free – or clean, green, renewable or sustainable.

The 1977 Surface Mining Control and Reclamation Act mandates that new surface coal mines include plans and set aside funds for full reclamation of mine properties. The law also sets standards for restoring abandoned mine lands. There is nothing akin to this for solar facilities and wastes.

Similarly, the 1980 Superfund law (Comprehensive Environmental Response, Compensation and Liability Act) created a tax and trust fund to pay for preventing and fixing actual or threatened releases of hazardous substances that could endanger public health or the environment. Again, still nothing for solar.

The 1982 Nuclear Waste Policy Act prioritizes deep geologic repositories for safe storage and/or disposal of radioactive waste. Unfortunately, 25 years after being designated as the disposal site, Nevada’s Yucca Mountain, has never opened, because of conflicts among politicians, locals, anti-nuclear activists, government officials and the nuclear industry; the U.S. still stores its nuclear waste at 75 scattered sites, including some near New York City, New Orleans and Chicago. But for solar no steps have been taken.

While coal, nuclear, and petrochemical companies must come up with detailed, costly plans for dealing with real or potential negative consequences of their operations, solar (and wind) companies have been “rewarded” with massive subsidies and absolutely no disposal standards or requirements.

No government grants require that solar companies set aside money to dispose of, store or recycle wastes generated during manufacturing or after massive solar “farms” have ceased functioning and been torn down. Solar (and wind) customers are likewise not charged for waste cleanup, disposal, or reuse and recycling. This and the massive subsidies distort and hide the true costs of solar power.

But reality is starting to catch up. Disposal (or recycling) costs will have to be paid, ultimately by consumers. The more solar panels we have (likely billions within a few years), the higher those costs will be. Consumers in states like California that have committed to heavy reliance on solar (and wind) energy (and already have the nation’s highest energy bills) will have to pay even more.

California is also facing a secondary problem from the proliferation of subsidized industrial solar installations. A 2015 study jointly by Stanford University and the Carnegie Institution for Science found that nearly a third of the state’s solar development is occurring on former cropland, where many farmers are shifting from growing crops to using their land to generate electricity – rather than letting it become wildlife habitat. As Big Solar also moves into natural areas, California is losing even more habitat and scenic land, while the integrity of state and national parks suffers from the nearby glare of countless solar panels and towering transmission lines to distant cities.

The Stanford study highlights another problem: localized higher temperatures. It found it will take an area the size of South Carolina filled with solar arrays to meet California’s goal of cutting greenhouse gas emissions 80% below 1990 levels by 2050. [It would take at least eight South Carolinas if the California mandate were extended nationwide.]

Australia is already coping with this unwelcome reality. Not until 2018 did Aussie environment ministers mandate fast-track development of new product stewardship schemes for photovoltaic (PV) solar panels, like those television and computer manufacturers and retailers have had to comply with since 2011.

Total Environment Centre director Jeff Angel admitted that setting standards for life-of-product management for solar panels was “long overdue,” and that the 30-year delay in imposing standards revealed a “fundamental weakness” in Australia’s waste policies. He further noted that while solar panels contain hazardous substances, Aussies are “sending hundreds of thousands of e-waste items to landfills” and creating significant pollution problems. And Australia has less than a tenth of the U.S. population!

Since 2002, the European Union’s Waste Electrical and Electronic Equipment (WEEE) Directive has required that original producers of e-wastes guarantee and pay for taking back and recycling their wastes, so that end-user consumers aren’t surprised by additional disposal costs.

However, PV solar panel waste was not included in this mandate until July 2012 – and “some uncertainty remains” about the cutoff date for such wastes, because the directive has yet to be implemented in national laws. Producer financing of PV waste treatment thus cannot be applied to older solar panels. So who will pay? And how much?

Ms. Folk and others look to waste-to-energy plants, and indeed the EU does send much of its solar panel waste to incinerators – which many environmentalists oppose. Landfilling is not a viable option in the U.S., because toxins could leach out. Unscrupulous companies ship solar panel waste to developing nations, but that is a stopgap solution that is environmentally irresponsible.

Tao Meng, lead author of a new study, says “the big blind spot in the U.S. for recycling is that the cost far exceeds the revenue” – by nearly 10-to-1, especially when including transportation costs. Chemicals must be used to remove silver and lead from silicon modules before they can be safely placed in landfills, Meng notes.

So when you read that solar energy is already cheaper than natural gas, don’t be fooled. They are omitting the pollution and disposal costs, as well as habitat losses, solar heat islands, and the need for backup power generation or batteries – to lowball the true costs of solar. We need some honest math now, before it’s too late to turn back.