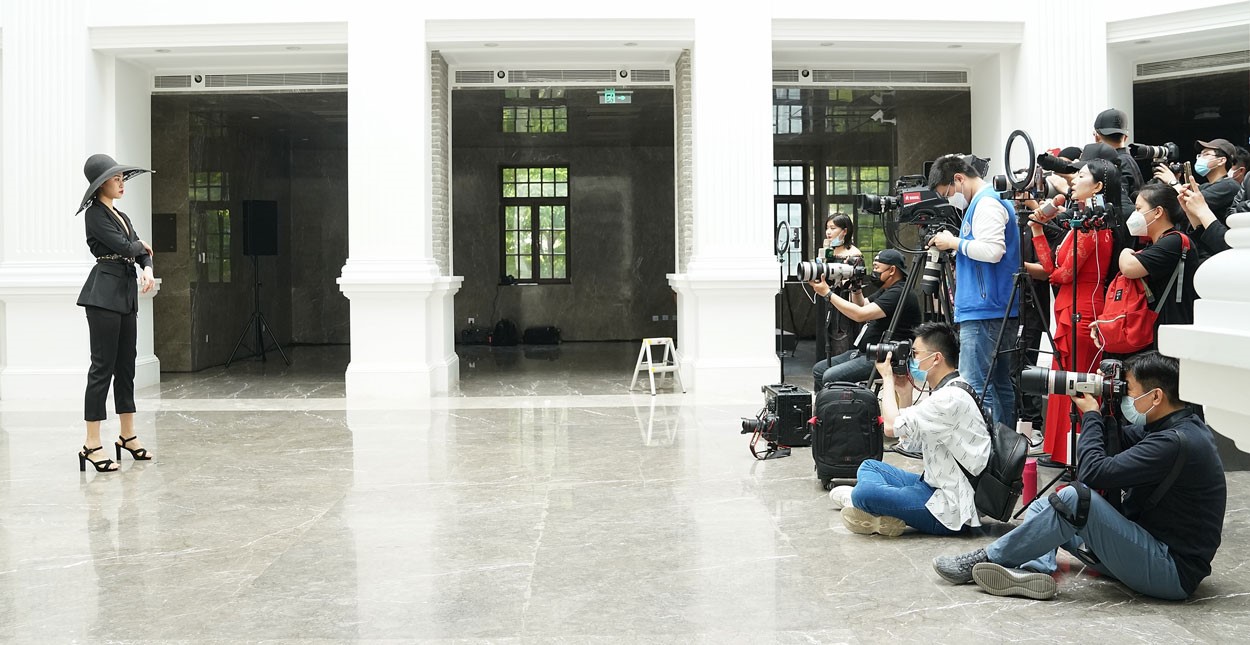 Increasingly, leaders in Europe and the United States recognize that doing business as usual with China is risky business. Pictured: Masked news reporters and camera crews keep a distance Monday in Beijing as a model walks the runway during China Fashion Week, the first time the show has gone on with no audience. (Photo: Lintao Zhang/Getty Images)

Let’s be realistic. No consensus exists on the future of relations between China and the West. Yet, clearly that is changing.

Previously, many looked at Beijing as little more than a “checkbook,” an opportunity to make a quick buck and buy cheap stuff. That is quickly becoming the minority view. Even those still anxious to continue to engage know we are heading into troubled waters.

Left unaddressed, the influence of China’s communist government will threaten the freedom, prosperity, and security of the transatlantic community. Only together can the U.S., Canada, and its European partners ensure a stable future that allows free nations to thrive.

>>> When can America reopen? The National Coronavirus Recovery Commission, a project of The Heritage Foundation, is gathering America’s top thinkers together to figure that out. Learn more here.

It is also not realistic to think the world will harden into new Cold War camps. We live in an interconnected world; a world of independent nations doing business around the clock; where the “freedom of the commons,” including the freedom to cross the seas and transit the skies, is a right.

That means the future is going to be messy. We can’t just wish China away.

To get through this, the family of free nations in the transatlantic community can’t be neutral in our approach to global affairs and China’s role. After all, we believe in popular sovereignty, human rights, and free enterprise. The Chinese Communist Party does not. If we do not stand together and defend these equities, we will lose the world we love.

Increasingly, leaders in Europe and the United States recognize that doing business as usual with China is risky business. So what do we do?

In part, the issue of China has come to the forefront because of the appalling behavior of the Chinese Communist Party in responding to the outbreak in Wuhan of COVID-19, the disease caused by the new coronavirus. No question, the Chinese government allowed people to travel internationally, knowing they had the potential to be highly contagious.

Further, China delayed reporting under international health regulations and did not provide live samples of the coronavirus to other countries for research and vaccine development. The regime’s behavior is not an aberration. China has a long history of bad behavior.

The global pandemic demonstrated the catastrophic consequences of leaving Beijing unchecked. Just as we need a vaccine to deal with COVID-19, we need a prophylaxis to deal with a belligerent, uncooperative Chinese Communist Party. Let’s get to it.

From telecommunications to industrial control systems, from space and cyberspace to bridges, railroads, and ports, China already has a heavy footprint presence throughout the transatlantic community. NATO will need all this infrastructure to deter conflict and defend itself.

Yet if China controls the off switch or has the capacity to conduct malicious or denial activities, NATO’s capacity for self-defense will be severely compromised. NATO must be willing to prevent China from having the capacity to interfere in the defense of the alliance’s area of responsibility.

NATO nations all must continue to demonstrate the capacity for self-defense against other external threats.

The U.S. is a global power with global interests and responsibilities; in addition to participating in protecting the transatlantic community, the U.S. must face China in the Indo-Pacific and achieve a stable Middle East. For the U.S. to do all three well, NATO must do its part—particularly in dealing with the great external threats to European security.

NATO’s top priority must be countering the destabilizing activities of Russia. The second major threat is that the problems of the Middle East may spill over into and destabilize Europe. To confront all those very real possibilities, NATO needs to have the capacity and capability to look and act south toward the Middle East.

In short, a strong NATO allows the U.S. to focus more on responding to the global China challenge.

The European Union has a role. In addressing the destabilizing China threat to Europe, the EU is America’s other indispensable partner.

European leaders have seen in the past how China has used its relationships with individual European states to divide and conquer, play one country off against another, and undermine European solidarity to act in its own self-interest.

Further, the EU manages many of the competencies required to restrain Chinese predatory behavior, particularly in the areas of trade, finance, and investment.

Another area where EU-U.S. cooperation is vital is in taking on the challenges in Africa. Some African nations face a diversity of challenges, from human rights and lack of economic freedom to terrorism and environmental and public health issues, complicated by poor governance and public safety.

China’s incursions into Africa have served only to exacerbate all these problems. The Chinese have enabled corruption, employed predatory lending practices, and spread disinformation. The EU could be a partner for tackling many of these challenges together.

For years, the Chinese Communist Party aggressively has attempted to inject staff and leaders into international organizations who are beholden to the Beijing regime. The World Health Organization is an ice shaving on the tip of the iceberg. The U.S. needs partners to tackle this threat.

We need a joint U.S.-European economic recovery program. This program would not consist of traditional foreign aid but instead rely on investment and partnership engaging the private sector.

The United States and Europe need each other more than ever. It is time for leaders on both sides of the Atlantic to invest in strengthening the world’s most important partnership.