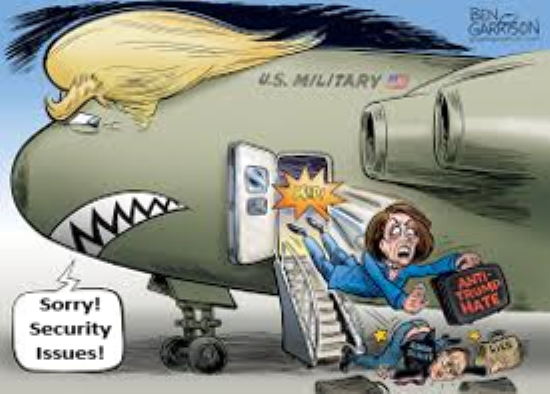 Some fun and some facts:  Be sure to ck. out the last sub-title.

Hey, we can dream…

The headline says it all. Our ‘wicked witch from the west’ might have learned a great deal more on her un-announced trip to Afghanistan had she gone there and then been left there, ‘for security reasons,’ to soak up the real feel of America’s longest war until she gave up her ‘no wall’ and ‘boycott of America’s traditional State of the Union speech’ positions.

Those security problems could have surfaced because President Trump could have also chosen to, after she arrived, immediately brought enough troops and their equipment home to build our new tall wall immediately, therefore reducing our adequate security protection until a small contingent returns after the wall is built.  So ‘Backatcha madam speaker.’

With her level of stubbornness to stop everything Trump no matter what, I could have seen her settling in for a couple years there, maybe even seeing her in her own mud hut, behind her own 20 foot high wall, of course. With a sign out front for her opportunistic new perfect Afghanistan business, a floral shop named, naturally… ‘Pelosi’s Poppies.’  It’s a natural, and the girl’s not one to turn down opportunities.  Remember, she bragged that she is a ‘master legislator,’ and opportunities and deals are her world.

BUT NANCY’S THE ‘GOTTA GO’ GIRL

I doubt she could have stayed put though, so renting a car or taking a bus to an open airport in Pakistan could have become a meaningful course of direction for this most driven of vixens as well as a big new experience for a renowned world traveler.  Remember, in the last month she has been in Washington, DC, San Francisco, CA, Hawaii, Washington, DC, Puerto Rico, back to DC and then was on a bus going to a military plane to make this trip.  And now in fact, she is making a trip by commercial flights to parts unknown. Can’t negotiate if she’s not around.  It’s a shame, Trump’s opportunity was missed. She could have seen a lot more of Afghanistan and possibly taken in a good bit of Pakistan too.

Due to the fear of road travel with IED’s and lurking bad guys, however, she might have chosen the means of transportation to be some friendly, but slow camels. Perhaps, more apropos though, you might 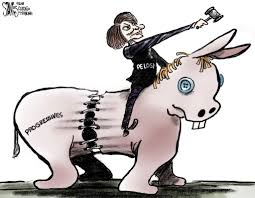 think a devout true Democrat would, stubbornly as donkeys, insist on donkeys for such a pilgrimage. This would have been a very strange caravan in the neighborhood, so perhaps if Pakistan picked up on what would have been lumbering their way, they too might have wished to get up a wall.  Quick!  ‘Nancy Pelosi is coming!’

So much for the tongue in cheek stuff.

ON TO SOME SERIOUS FACTS

In their quest for power, Pelosi and Schumer are so utterly sickened by President Trump’s successes, all they have to counter with is obstructionism, their MSM comrades’ propaganda and now, out of desperation, in-our-face socialism.

It’s enlightening to know that President George W. Bush created a good intentions ‘Secure Fence Act of 2006,’ which all but Pelosi enthusiastically signed!  It’s interesting that she voted Noe since she is on record saying she supported border security.  With her though, it appears she is more about globalism than socialism.

“This bill will help protect the American people. This bill will make our borders more secure. It is an important step toward immigration reform.”   – President George W. Bush, 10/26/06

Today, President Bush Signed The Secure Fence Act – An Important Step Forward In Our Nation’s Efforts To Control Our Borders And Reform Our Immigration System. Earlier this year, the President laid out a strategy for comprehensive immigration reform. The Secure Fence Act is one part of this reform, and the President will work with Congress to finish the job and pass the remaining elements of this strategy.

The Secure Fence Act Builds On Progress Securing the Border

By Making Wise Use Of Physical Barriers And Deploying 21st Century Technology, We Can Help Our Border Patrol Agents Do Their Job And Make Our Border More Secure. The Secure Fence Act:

Comprehensive Immigration Reform Begins With Securing The Border. Since President Bush took office, we have:

This Act Is One Part of Our Effort to Reform Our Immigration System, And We Have More Work To Do

Comprehensive Immigration Reform Requires That We Enforce Our Immigration Laws Inside America. It is against the law to knowingly hire illegal workers, so the Administration has stepped up worksite enforcement. Many businesses want to obey the law, but cannot verify the legal status of their employees because of the widespread problem of document fraud, so the President has also called on Congress to create a better system for verifying documents and work eligibility.

Comprehensive Immigration Reform Requires That We Reduce The Pressure On Our Border By Creating A Lawful Path For Foreign Workers To Enter Our Country On A Temporary Basis. A temporary worker program would meet the needs of our economy, reduce the appeal of human smugglers, make it less likely that people would risk their lives to cross the border, and ease the financial burden on State and local governments by replacing illegal workers with lawful taxpayers. Above all, a temporary worker program would add to our security by making certain we know who is in our country and why they are here.

Comprehensive Immigration Reform Requires That We Face The Reality That Millions Of Illegal Immigrants Are Here Already. The President opposes amnesty but believes there is a rational middle ground between granting an automatic path to citizenship for every illegal immigrant and a program of mass deportation. Illegal immigrants who have roots in our country and want to stay should have to pay a meaningful penalty for breaking the law, pay their taxes, learn English, work in a job for a number of years, and wait in line behind those who played by the rules and followed the law.

Comprehensive Immigration Reform Requires That We Honor The Great American Tradition Of The Melting Pot. Americans are bound together by our shared ideals, an appreciation of our history, respect for the flag we fly, and an ability to speak and write the English language. When immigrants assimilate and advance in our society, they realize their dreams, renew our spirit, and add to the unity of America.

Wikipedia comments on the results of this fence act: “Although the 2006 law authorized construction of a fence, Congress initially did not fully appropriate funds for it (see authorization-appropriation process). ‘Congress put aside $1.4 billion for the fence, but the whole cost, including maintenance, was pegged at $50 billion over 25 years, according to analyses at the time.’”  See: ‘How Congress Prevented Border Fence Law’s Implementation’

REALISTIC CONCERNS FOR THE WALL

President Trump is excited about the USMCA deal with Mexico stating that it will be a tool for Mexico to indirectly pay for the wall.  Unfortunately, it appears that President Trump is entirely too busy and trusting of the wrong advisors to discover most that was bad in the TPP and NAFTA are also in the USMCA.  Virtually all the problems inherent in the TPP are likewise contained in the USMCA, such as the erosion of national sovereignty, submission to a new global governance authority, the unrestricted movement of foreign nationals, workers’ rights to collective bargaining, and regional measures to combat climate change.  Perhaps sometimes he can want a deal for the sake of one just too much.

As The John Birch Society’s Kristin Kenowski says in her article ‘Is a Border Wall worth the USMCA Passage?’ ”Instead of fixating on a physical barrier, Congress needs to start undoing the incentives that bring illegal aliens here in the first place. Promising government aid and welfare to those who can make it through our border security is not a deterrent! A border wall may only be a temporary fix for some.

“However, Senate Republicans are fixating on the $5.7 billion President Trump is requesting for the wall instead of on the incentives. Both they and the Democrats need to be persuaded to stand up for American sovereignty and stop the USMCA.

“Countries must have secure borders to protect their sovereignty. Without them, countries become regional unions, abrogating their sovereignty while delegating it to an unaccountable government. Phone your representative (202-225-3121) and senators (202-224-3121) and urge them to preserve our national sovereignty by voting to stop the USMCA. Follow up by emailing them and President Trump.”

A wall is worthless if we lose our sovereignty by becoming a member state of a North American Union that makes decisions for us by circumventing our Constitution, Congress and our courts.

The Dimm’s and the deep state RINO’s are losing votes due to turning off Americans with their globalist and socialist rants, so they are pressing for all the illegal alien and other illegal votes they can generate.

We need the wall, not the USMCA!  And we especially need to kill the Incentives that drive people here.