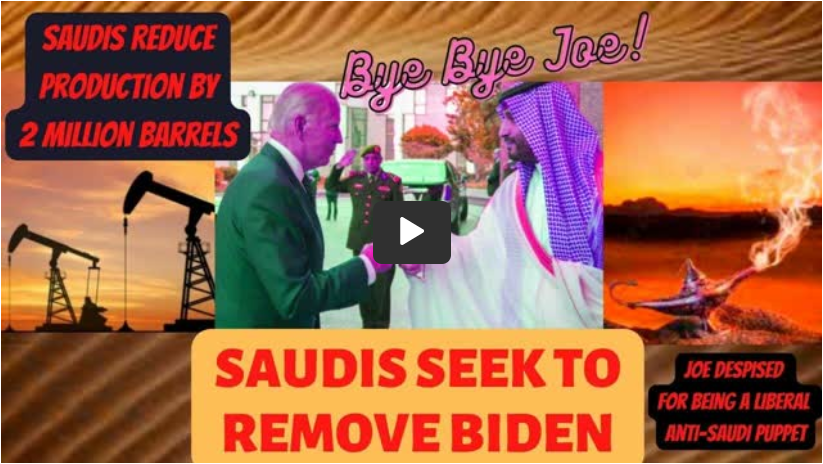 Reading Tea Leaves: Why did Saudi Arabia (SA) suddenly cut oil supply by 2 million daily barrels, or 2% of world supply? US media described this as “betrayal” & “greed.” Instead, ponder how recent American foreign policy insults motivated Saudis, such as claiming they will be made ‘pariahs’ because they are so immoral. Really?!  Meanwhile, US Dems threaten to withdraw troops, aid and weapons.

Lib Pygmies: Joe allowed his insatiable leftist pygmies to reject SA, one of our closest allies, for ‘moral failures.’ A year later, as Joe desperately reaches for an energy lifeline, SA slows the pumps right before an election. Immediately after Biden’s hat-in-hand visit. So now, as oil production is cut, spiking US prices, while America has vast, untapped reserves, it makes Joe look like a blindfolded hemophiliac staggering around a needle factory.

Paying Our Enemies: Bear in mind, in bowing to Iran, we empower Ayatollah’s regime which is said to be at the point of implosion for women’s rights failures. Although last time, Barack refused to support a revolution, too. Again, Venezuela’s failed state is buoyed by Russian & Chinese aid, directed by Cuban advisors, all our enemies.

So what does SA gain if Biden’s team loses?

“I would make it very clear we were not going to in fact sell more weapons to them. We were going to in fact make them pay the price, and make them in fact the pariah that they are.” Adding…there is “very little social redeeming value in the present government in Saudi Arabia.” And he promised he’d…“end the sale of material to the Saudis where they’re going in and murdering Yemeni children.”

Judge Joe: Biden claimed he’d “reevaluate our relationship with Saudi Arabia to ensure it is fully aligned with American values and priorities.” But isn’t this the height of cultural imperialism? Why assume America is on the higher ground when the Dem party rails against the USA, daily? And what if SA quite rightly stated they wouldn’t sell USA any more oil until we stop the barbaric practice of murdering children by abortion, much as Biden accused the Saudis of child killing?

Libs Speak Truth? Biden’s position is a high-risk, low yield approach to diplomacy. Joe’s theory of foreign policy rests on the “speaking truth to power” notion, insisting that by simply “confronting bad leaders”, the world will improve. But now, after repeatedly insulting SA, with nothing to show in return, Biden has now absurdly flown to SA to debase USA & play the beggar.

Can Puppets “Confront” Humans? Joe waltzed in on tiptoe like a marionette, read a script, fist bumped, ending up a laughingstock. In fact, Joe was “caught flat-footed” by OPEC+. Biden’s response is depleting more Strategic Petroleum Reserve, while it’s being plundered in a wickedly passive aggressive stunt, some millions of barrels were even sent to China! The US media habitually hides the truth, drunk on script control power, regardless of the cost.

Energy Absurdity: And now, Biden’s theater of the absurd policy platform burns to the ground in a hilarious conflagration. For instance, Joe’s Insane Clown Posse advisors are currently pondering canceling US Gulf oil leases, being 15% of our petroleum production, while begging for foreign oil. Meanwhile, CA fuel prices spike to $8 a gallon. How about just reopening the Keystone oil pipeline & all fed lands formerly leased for oil exploration? Problem solved!

Resist Crazy Joe: As Biden is incapable of leadership, he’s therefore led by an unknown group of advisors who decide his policies and type up his speeches. We battle an anonymous army. But unless we fight back in the Nov 8th elections and retake the House and Senate, the future of a robust America looks very grim. Yet, do we have the discipline, faith and wisdom to pull off this resistance? But, if even the Saudis can countermove against Joe, can’t we put in even a little effort to save America? After all, this might be the divine assistance conservatives needed. 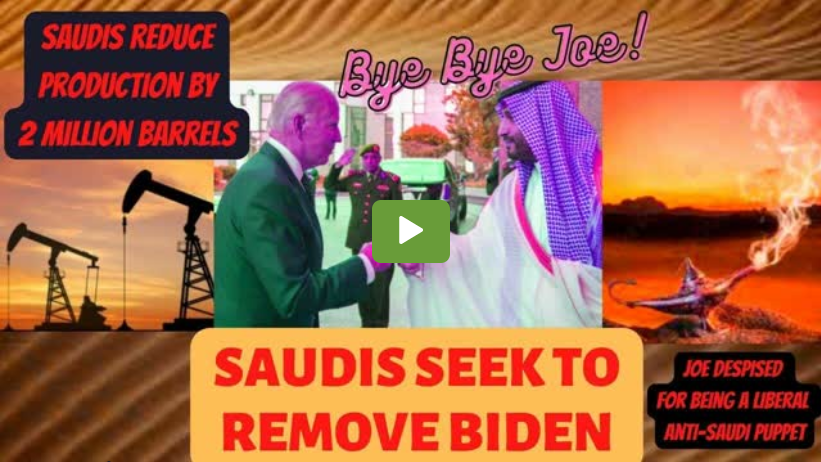