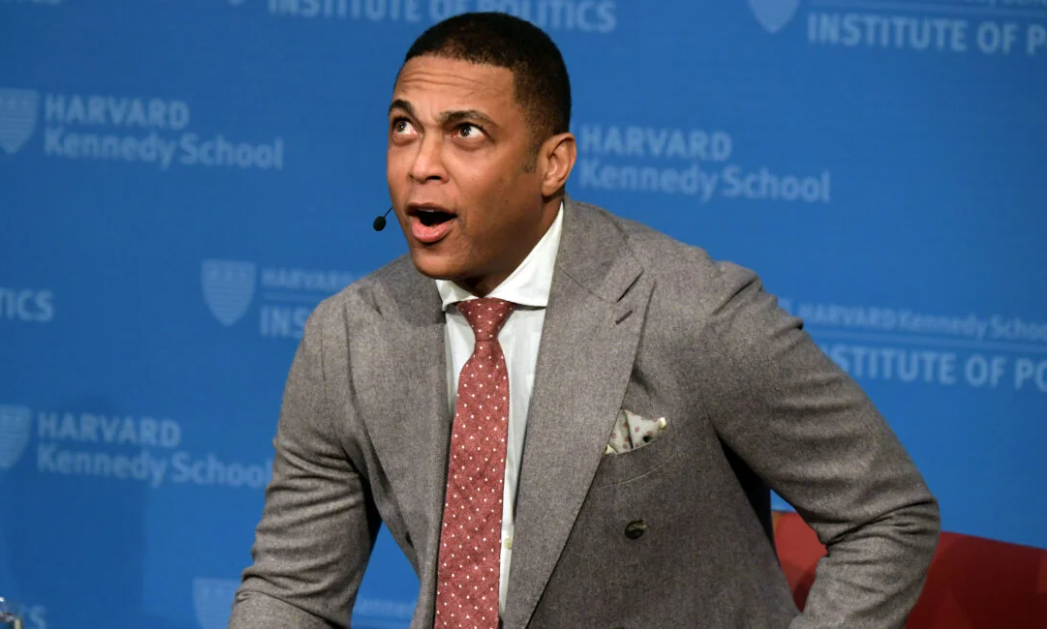 CNN’s Don Lemon—seen here at Harvard University’s Kennedy School of Government Institute of Politics taking part in a program titled “Race, Media and Politics” on Feb. 22, 2019, in Cambridge, Massachusetts—was taken aback in a Tuesday interview when he got an answer he wasn’t expecting on racial reparations. (Photo: Paul Marotta/Getty Images)

The Left loves to promote “reparations”—but only up until the point where history and truth run counter to its simplistic narratives about the past.

British royals expert Hilary Fordwich threw CNN host Don Lemon for a loop on Tuesday when he asked her if the British monarchy should pay reparations for colonialism and slavery.

Lemon said to Fordwich, “[Y]ou have those who are asking for reparations for colonialism, and they’re wondering, you know, ‘$100 billion, $24 billion here and there, $500 million there.’”

To cut to the clickbait, you won’t believe what happened next.

First, Fordwich acknowledged that there are people asking for reparations, but then turned the discussion on its head. She said that looking to the British monarchy for reparations is the wrong place to go.

Instead, proponents of reparations should look first to “the beginning of the supply chain”—that is, to the African kingdoms that initially enslaved Africans and sold them—rather than the British, who were a key force in eliminating slavery globally.

“Which was the first nation in the world that abolished slavery?” Fordwich asked rhetorically, then answered her own question. It was the British, she said.

“In Great Britain, they abolished slavery. Two thousand naval men died on the high seas trying to stop slavery. Why? Because the African kings were rounding up their own people,” she said. “They had them [in] cages, waiting in the beaches.”

She ended with this incredible finisher:

I think you’re totally right. If reparations need to be paid, we need to go right back to the beginning of that supply chain and say, ‘Who was rounding up their own people and having them handcuffed in cages?’ Absolutely, that’s where they should start.

The segment is well worth watching, if only to see Lemon’s face and reaction when challenged with an “honest” discussion about slavery and history. 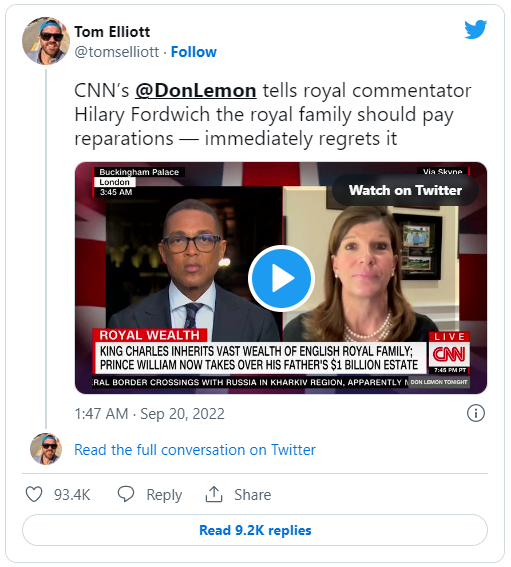 Discussions about reparations are timely, given the release of “The Woman King,” a Hollywood production that tells the story of a group of 19th-century female African warriors from the kingdom of Dahomey. The movie portrays the protagonists as proto-pan-African liberators fighting imperialism and slavery, but the truth was in many ways quite the opposite.

Dahomey—located in what is now the country of Benin—and other African kingdoms were often enthusiastically pro-slavery. The port city of Anomabo, for instance—which is in present-day Ghana—became a powerful, central hub of the slave trade. Its considerable wealth—built mostly on the trans-Atlantic slave trade—dried up when the British Empire and other Western powers not only turned on the practice of slavery, but used force to bring it to an end.

The near-universal, global practice of slavery—which has dogged civilization throughout its history—mostly came to an end because of the rise and power of the West. Are Ghana and Benin now on the hook to pay reparations?

These thorny issues somehow get glossed over in the debate about historical guilt and culpability. But they suddenly matter, given that the issue has been taken seriously by left-wing policymakers.

A recent Vox article laid out how reparations are being discussed by local governments and institutions to capitalize on the “great awokening” that began in earnest in 2020.

It’s apparently becoming a serious proposal in some localities. From Vox:

Advocates continue to demand action on reparations from the federal government. But local governments and institutions aren’t waiting to try their hand at reparative justice.

Its most recent findings suggested that racial disparities in society are based on institutional racism and white supremacy. Its recommendations for remedies range from essentially depolicing predominantly black neighborhoods to direct payments for black families in the state.

Many of its suggestions would likely create more inequality and misery for black Californians, but the underlying premise is essentially that governments need to pay up and keep paying up until equity improves.

But is that truly just or helpful?

The question of whether entire groups of people deserve “reparations” is already philosophically dicey. Sure, it might make sense that someone who was enslaved or lost their property due to enslavement would be directly compensated. But what about family members four, five, or six generations removed?

Sorting out specific history to find out who had truly been victimized can be quite problematic, too. Take for instance recent stories about the supposed mass graves of Indigenous children near a school in Canada that had been run by the Catholic Church. The story prompted vandalism and attacks on churches in Canada.

But upon further investigation, it appears the story wasn’t true, or at least no evidence was found that it was.

Are reparations going to be based on a genetic test; specifically,  a “one drop of blood rule” with the implications that one drop of DNA from an officially oppressed group will bring a stipend from the government for not only you, but for your posterity, too?

That seems to be the case with some of those local and federal initiatives.

For instance, in 2021, Oakland, California, launched a universal basic income program that would give money only to “black, indigenous, and other people of color.”

In January, Vermont announced that an early round of its released COVID-19 vaccines would be available to “all black, indigenous residents, and other people of color who are permanent Vermont residents and 16 or older.”

Such initiatives might be a violation of civil rights laws and the 14th Amendment, but it’s not stopping some local, state, and federal government agencies from trying. The new, woke position is that legal racial favoritism and segregation are good things, and proponents are clearly happy to bend or circumvent laws that stand in the way.

Legal or not, reparation plans are deeply flawed and often create new injustices in implementation. In the end, they are based on the premise that the only way to get ahead in society is to claim victimhood and shake down your neighbors.

“This takes the U.S. along the path to ruin in many ways,” wrote J.L. Reiter on the John Hulsman Substack website. “Reparations are incalculable, in that none of the necessary variables exist; impracticable, in that they could not be carried out without grave economic damage; and impolitic, in that they would derail America’s steady progress toward racial equality, while exacerbating interracial animus.”

Most Americans outside of our most elite institutions likely already recognize this and oppose legal racial preferences and affirmative action. Poll numbers on reparations also show broad majorities against them.

Yet, the top-down woke revolution goes on, and so, we must take reparations proposals both seriously and literally. And reject them.

Jarrett Stepman is a columnist for The Daily Signal. He is also the author of the book “The War on History: The Conspiracy to Rewrite America’s Past.” Send an email to Jarrett