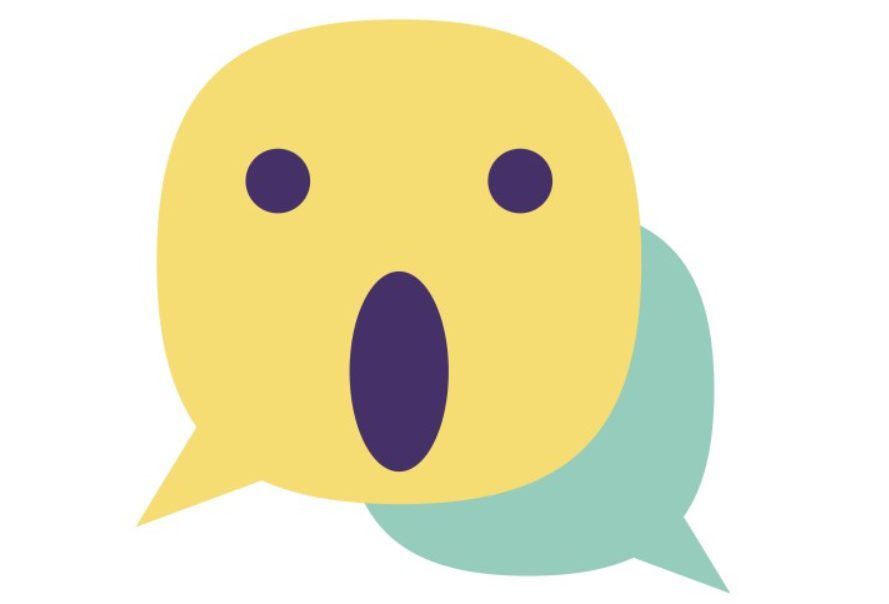 According to internal messages leaked this week, a good number of Twitter employees are losing their minds over Elon Musk’s purchase of the social media platform. The messages — obtained by the New York Post — show that woke Twitter employees are afraid and angry. Some showed their disgust over the very idea of free speech.

Given Twitter’s history of coddling extreme Leftists, the culture of the company is perhaps best described as “woke.” And while Elon Musk is no conservative, he is not “woke.” And that is a bridge too far for some of his soon-to-employees. The shock, pain, and confusion they are experiencing is likely similar to that which conservative employees of My Pillow would experience if Alexandria Ocasio-Cortez bought the company from Mike Lindell.

And while the woke mob of Twitter employees would dispute the statement above that Musk is no conservative, he himself has made that clear. In a Thursday tweet, Musk asserted that his “conservatism” is only a matter of the Left having moved so far left that he looks like he’s on the Right. 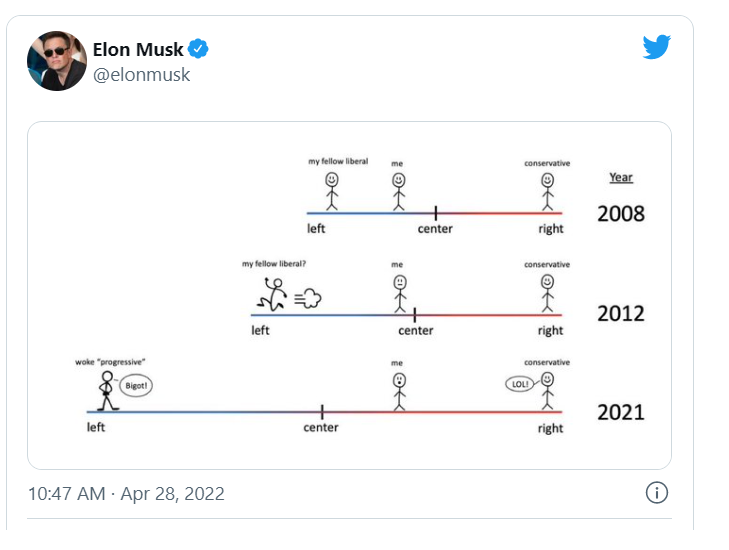 As TechCrunch reported, Until the deal is finalized and Musk actually takes control, some things are kind of up in the air:

But that answer — being shy of “nothing will change” — was unacceptable to the censorship-happy woke snowflakes who largely populate the Twitter workforce.

A site reliability engineer (corporate tech-speak for website maintenance “person” who gets paid a lot of money) said, “Physically cringy watching Elon talk about free speech.” Unsurprisingly, that maintenance “person” (can’t say “guy” for obvious reasons) “identifies as a nonbinary transgender and plural person.” So — the singular “they” “are” cringing at “their” new boss addressing the importance of free speech. That is interesting, considering that Twitter has always claimed to give half a darn about free speech.

But perhaps a senior staff software engineer — who referred to Musk as an “a**hole” (not sure the asterisks tone that down any at all, considering the limited geography of that phrase) — best expressed the sentiments of the woke crowd of Twitter employees when he said, “We’re all going through the five stages of grief in cycles and everyone’s nerves are frazzled,” adding, “We’re all spinning our wheels, and coming up with worst case scenarios (Trump returns! No more moderation!). The fact is that [Musk] has not talked about what he’s planning on doing in any detail outside of broad sweeping statements that could be easily seen as hyperbolic showboating.”

His fear that the “worst case scenarios” include President Trump being allowed to return to the platform and the inability to silence conservatives is a great indicator that he never needed to be a software engineer for a major communications platform — senior or otherwise — in the first place. And just in case anyone is laboring under the misapprehension that his reference to “moderation” meant anything other than the silencing of conservative voices, the long habit of Twitter allowing almost any level of abuse and threats from liberals while calling simple statements of fact — such as “men are not women” — as “threats” and “violence” should suffice to quell that confusion.

One senior staff video engineer made it clear that there is not a place in Musk’s Twitter for his talent, stating, “Not the place to say it perhaps, but I will not work for this company after the takeover.”

At some point in the meeting, some seemed to realize that the angry gripe-fest could be searchable on Slack, so the employees moved their conversation over to encrypted channels, such as Signal.

One interesting point that comes from all of this is that even some senior management at Twitter seemed to realize that having a bunch of hurt, angry, woke-warriors with access to the keys to the kingdom was a bad idea. In response, Twitter locked its source code to prevent those employees from making unauthorized changes that could scuttle the company. As even Bloomberg — which cannot be accused of a conservative bias — reported:

And while Leslie Berland — who is listed as “Chief Marketing Officer” and “Head of People” at Twitter — tweeted that an audio clip from the meeting has been “leaked, edited and misrepresented as” her “views” and those of Twitter, it appears she was referring to a version of the audio of the meeting that was edited before being leaked via Twitter. The version of the conversation provided to the Washington Post does not appear to be — and has been alleged to be edited. The full audio is available for anyone to hear for themselves: 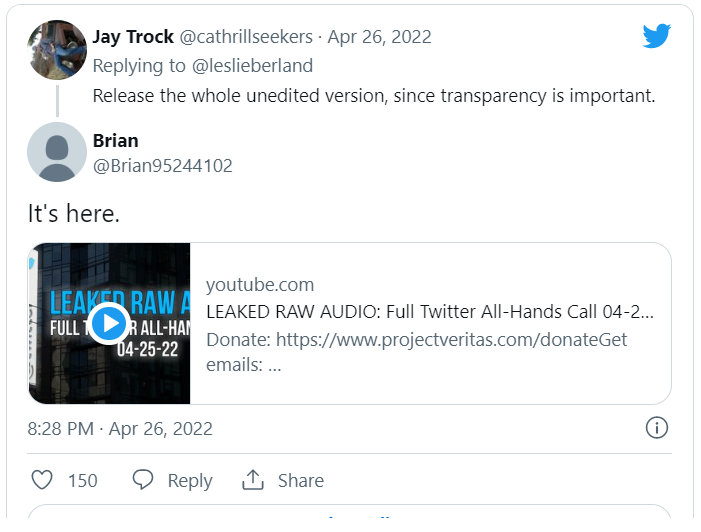 The outrage exhibited in the “all hands” meeting had been growing for weeks, beginning with the idea that Musk might actually succeed in buying Twitter. As the Post reported: 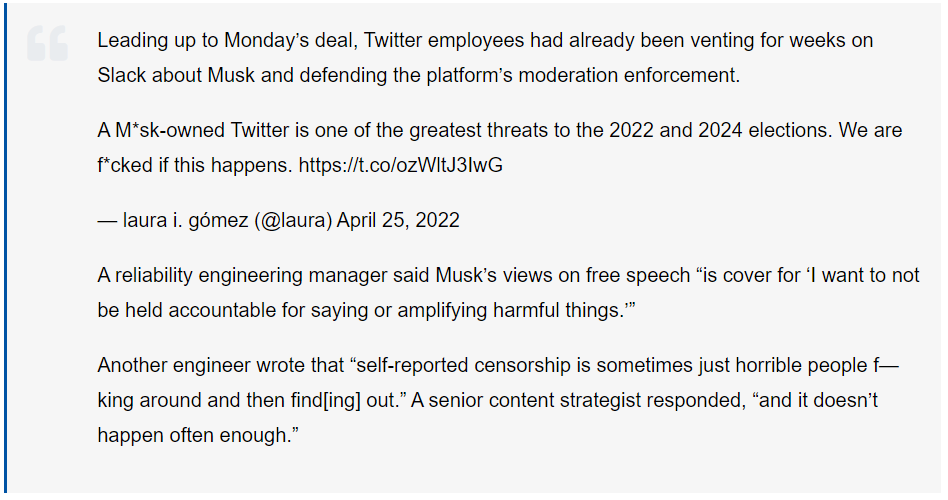 And much of the bellyaching building up to the gripe-fest was led by Senior Content Strategist, Connor Campbell, who went so far as to reply directly to a tweet from Musk addressing the censorship of tweets related to the story of Hunter Biden’s laptop. 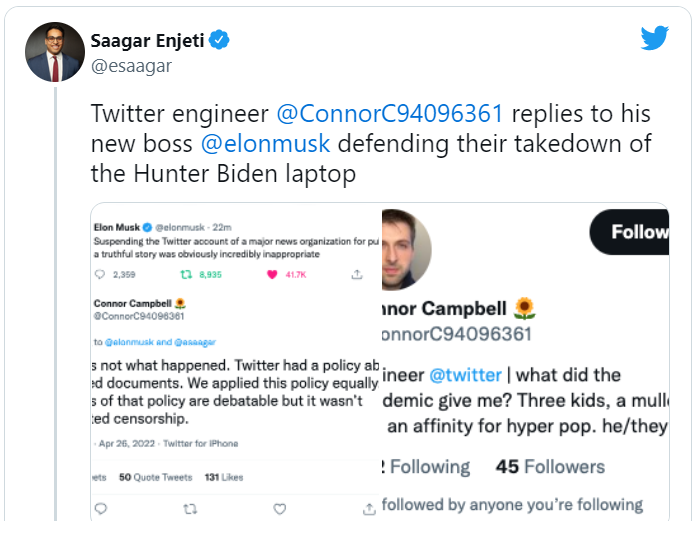 As the Musk era of Twitter approaches, the woke folks working there are horrified that they may lose the power they have wielded to push their woke agenda while silencing almost anything approaching dissent. And while — again — Musk would not exactly pass for a conservative, the reaction of his future (and soon, likely, former) employees is at least one reason to celebrate his take-over of Twitter.