Fighting for Free and Fair Elections 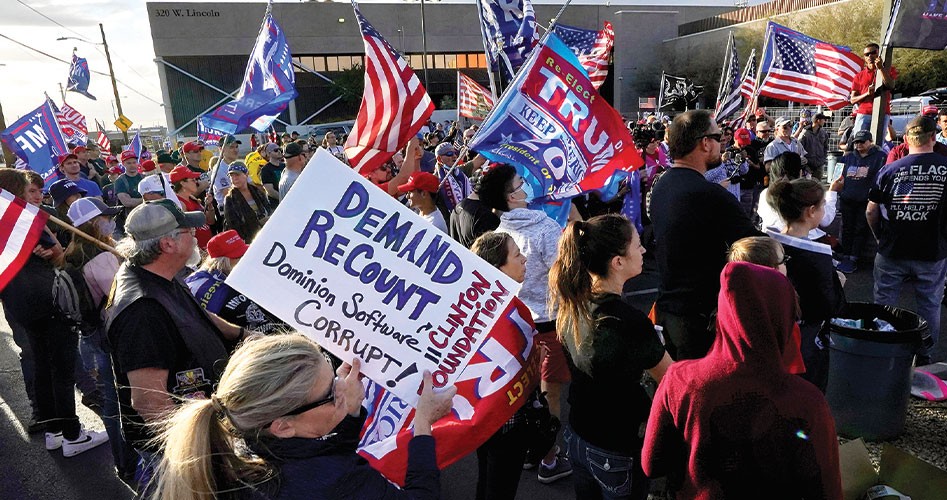 Fighting for Free and Fair Elections

But just as the courageous Bannon has never ceased talking about election fraud, so, too, must Americans never forget 2020 and continue to seek the truth of what really happened on November 3, and still get out and vote!

We owe a great debt of gratitude to the many Americans taking action to uphold the laws that protect the right of the self-governed to elect lawmakers who will defend the liberties of this free and unique nation at all costs.

In the Grand Canyon State, where Joe Biden was declared the winner over Donald Trump by a mere 10,457 votes, Rogers has used her political clout to spotlight the massive election anomalies and to demand not only investigations by Arizona Attorney General Mark Brnovich into alleged fraud, but full-scale criminal prosecutions of officials who broke the law.

Arizona’s historic Maricopa County audit further awakened Americans to the truth of a deeply flawed U.S. electoral system. Following the revealing and incriminating reports of that forensic evaluation, Senator Rogers gathered 186 legislators from 39 states to pen a letter to Americans calling for audits and decertification where evidence of fraud had surfaced, including the states of Pennsylvania and Wisconsin.

Yet while all eyes were on Arizona, patriots in the battleground state of Georgia were hard at work probing the facts of their own election concerns, and the fruits of their first-rate analysis are finally beginning to show.

Voters Are Engaged and Equipped

Over the past decade, burgeoning grassroots election-integrity organizations have made monumental inroads to help Americans engage in the electoral process. Staffed mostly by liberty-loving, truth-seeking volunteers, these often-bipartisan groups work relentlessly to equip voters with the resources and tools they need to end election fraud.

One such group, the Houston-based nonprofit True the Vote, founded in 2009 by Texan Catherine Engelbrecht, is conducting several ongoing, in-depth investigations into the U.S. elections system — a system it describes as “uniquely insecure.”

In a May 2020 interview with radio-show host Joe Pags, Engelbrecht accurately predicted “engineered chaos” for the 2020 presidential election:

What we’re not being told in this current push toward mail-in [ballots] is that it’s not just about standardizing [the proc-ess of mail-in voting]; it’s also about a push to do away with voter ID, to get away from signature comparison, to provide for limitless ballot harvesting. All of that is part of a much larger [scheme] that is going to end up in a disaster this November.

Of course, Engelbrecht was right. In the months following the 2020 election, mounting evidence of widespread fraud showed the integrity of the presidential race to be severely compromised. A movement was thus born that has greatly dispelled the myths devised by the Democrats and the legacy media that the 2020 election was the “most secure” in the nation’s history and that former Vice President Biden was the indisputable winner.

True the Vote, mindfully steering clear of the legacy media spotlight, has vehemently maintained that election processes in 2020 were “fundamentally altered, under the fog of COVID.” For more than a year, while the months-long audit was under way in Arizona, the voter group was spearheading a massive video-surveillance project to catch potential ballot traffickers in Georgia.

Their research began shortly after November 3, 2020, and was largely kept secret until January 2022. The plan was to prove election malfeasance by tracking the movements of ballot traffickers and ballot drop boxes in the battleground state during the presidential election and subsequent run-off Senate races. The practice of gathering and delivering ballots for voters, known as harvesting, is illegal in the Peach State.

In early January, Georgia authorities announced they are investigating the video footage obtained by True the Vote. Georgia Secretary of State Brad Raffensperger confirmed to the media outlet Just the News that subpoenas may be forthcoming.

Appearing on CBS’s Face the Nation, Raffensperger commented that “no one has alleged those are fraudulent ballots,” adding, “those were lawful voters. And the allegation is that they were collected and delivered by a person.”

However, Just the News read the full complaint by True the Vote, citing critical evidence that “scores of activists worked with nonprofit groups to collect and deliver thousands of absentee ballots, often during wee-hour operations, to temporary voting drop boxes distributed around the state during the pandemic.”

Furthermore, True the Vote obtained geolocation data for the cellphones of more than 200 liberal activists captured on the videotapes, allegedly documenting the dates and times of ballot drop-offs.

“When you hand over that ballot to a harvester you can kiss it goodbye,” said Engelbrecht in an interview. “Maybe it makes it to the count, maybe it doesn’t. You have no way of controlling that.”

Raffensperger, a Republican, should agree with her claims. In 2019, he pushed for a ban on ballot harvesting prior to the 2020 election. Later, the secretary’s reputation was destroyed for refusing the Trump campaign’s request to audit signatures of absentee ballots and envelopes during the recount of the fewer- than 12,000 votes that separated Biden from Trump in Georgia’s final vote tally.

Just days after the election, Raffensperger brazenly wrote in a Washington Post op-ed that “Georgia’s voting system has never been more secure or trustworthy.”

True the Vote poured copious hours into its probe, acquiring an astonishing 10 trillion location-based cell signals to conduct its investigation, assisted by whistleblowers and witnesses. The group stresses that the mobile and GPS data “told the real tale,” and this is just the beginning.

“If law enforcement doesn’t initiate investigations, we have plans to release all data, all video, publicly,” reads a statement on the organization’s website.

The saga’s next chapter may address the tens of thousands of ballots that have been reported to have been duplicated in Georgia, specifically in the densely populated DeKalb and Fulton counties.

VoterGA Steps Up to Help

Another righteous election-integrity group, VoterGA, has continued to lead efforts to litigate against fraudulent ballot trafficking. In May 2021, VoterGA obtained a court order permitting the organization to inspect hundreds of thousands of mail-in ballot images following the state’s audit in November 2020.

The initial recount, while praised by Secretary Raffensperger, was deemed “fatally flawed” by VoterGA after the nonprofit’s own review uncovered a stunning 60-percent error rate. VoterGA’s founder, Garland Favorito, told The New American that Fulton County falsified tally sheets, that three days of chain-of-custody forms were missing, and that duplicate reporting of batches had occurred.

Joining the millions of Americans who have not been silent in decrying the outrage of the 2020 presidential election are two authors of new and notable books who brilliantly tell the truth of the country in crisis: Federalist contributor Mollie Hemingway recently released the comprehensive Rigged: How the Media, Big Tech, and the Democrats Seized Our Elections, and American Greatness Senior Editor Julie Kelly penned the meticulously researched analysis of January 6: How Democrats Used the Capitol Protest to Launch a War on Terror Against the Political Right.

Undoubtedly, Americans now have a renewed vision as to the importance of election integrity. Organizations such as True the Vote and VoterGA, along with intrepid state leaders, must remain diligent in pursuing honest elections and not give up!

As True the Vote’s Engelbrecht says, “Now more than ever before, we need to commit to participating in our local elections. If things are broken, work to fix them.” Engelbrecht’s commitment continues to energize the public for greater participation in state and national elections. Though the evidence of widespread election fraud remains overwhelming, and Americans’ confidence in the U.S. election process remains low, Engelbrecht and others like her offer a glimmer of hope even as more and more brave Americans continue to stand.