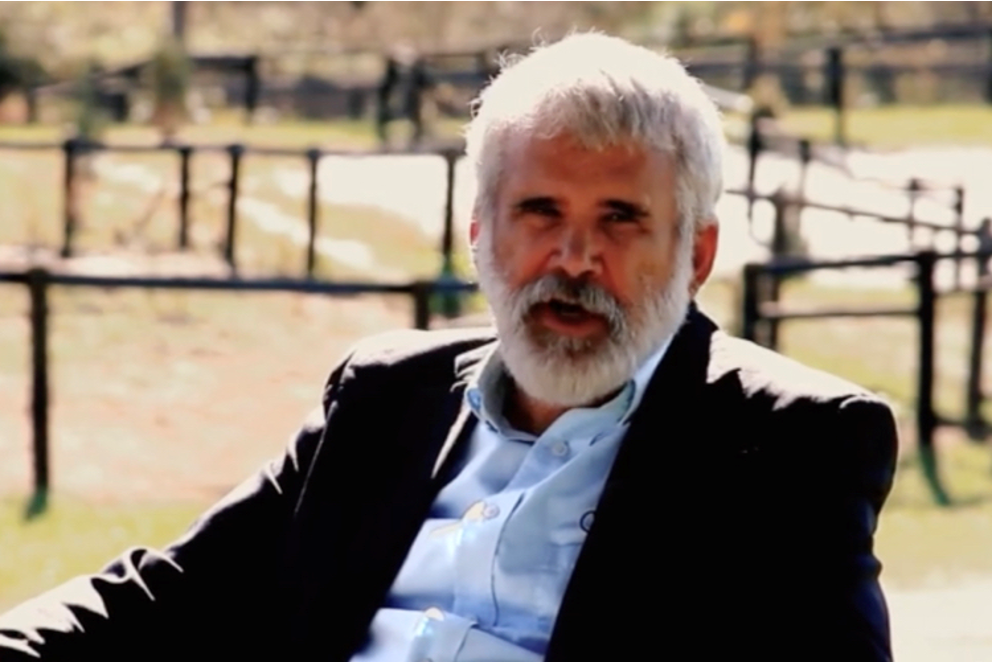 Robert W. Malone, the doctor who played the key role in inventing the mRNA vaccines now formulated to fight the China Virus, is gone from Twitter.

The leftist social media giant suspended Malone yesterday, almost certainly because he outspokenly opposes vaccinating children and young adults. In most cases, they have nothing to fear from the Asiatic pathogen.

Malone announced the suspension on Substack, although his Twitter followers likely knew before then that the anti-free speech outfit had deep-sixed his account.

Though one tweet appears to have inspired Twitter’s censors to exile the famous doctor, Malone confessed that he saw it coming.

“We all knew it would happen eventually,” Malone wrote:

“Today it did. Over a half million followers gone in a blink of an eye. That means I must have been on the mark, so to speak. Over the target. It also means we lost a critical component in our fight to stop these vaccines being mandated for children and to stop the corruption in our governments, as well as the medical-industrial complex and pharmaceutical industries.”

Malone told his fans to follow him at Substack, along with Gab, Gettr, and his website, rwmalonemd.com.

“I am not going away,” the wildly popular doctor wrote. “Every door closed is another open. Stay tuned and thank you all for your support.”

Malone has repeatedly tweeted studies and opinions to say that young people and kids not only don’t need the vaccine but actually might be harmed by it.

The tweet that apparently pushed the Deep State Twitter torpedoes to action concerned a study that showed “93 percent of people who died after being vaccinated were killed by the vaccine.” 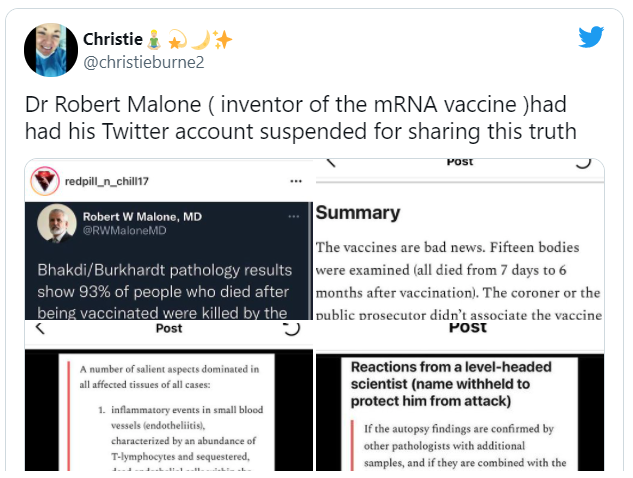 Malone included a summary of the study that vaccine skeptic Steve Kirsch published at Substack:

“The vaccines are bad news. Fifteen bodies were examined (all died from 7 days to 6 months after vaccination; ages 28 to 95). The coroner or the public prosecutor didn’t associate the vaccine as the cause of death in any of the cases. However, further examination revealed that the vaccine was implicated in the deaths of 14 of the 15 cases. The most attacked organ was the heart (in all of the people who died), but other organs were attacked as well. The implications are potentially enormous resulting in millions of deaths. The vaccines should be immediately halted.” 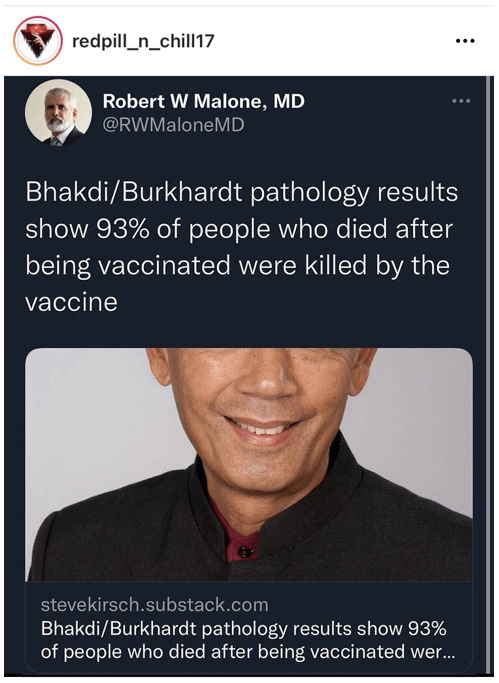 No wonder Malone told The New American’s Veronika Kyrylenko that the vaccines are “the largest experiment performed on human beings in the history of the world.”

In early December, Malone explained why parents should not vaccinate their kids.

“The data are clear,” he wrote. “Officials have reported 110 Omicron cases as of Saturday in the USA. Of the 66 people for whom vaccination status has been reported, 52 were fully vaccinated and many of those had been boosted.”

In other words, 78 percent of the 66 were vaccinated. Vaccination isn’t stopping the Omicron variant in most cases.

“Now that Omicron will become dominant very quickly and we know that there is a very good chance that natural infection confers better protection against Omicron and that for everyone this new variant is mild, why would we want to mandate vaccination for our healthy children?” he wrote:

Remember, this is what we know already before Omicron emerged:

“1 in 2700 male adolescents will get pericarditis/myocarditis from the Pfizer vaccine and the event rate appears to be even higher for Moderna.

1 in 2200 will get some sort of neurological event from the vaccine (based on the curious case of Pfizer clinical trial participant Maddie de Gary).

That the adverse events in children are much higher than originally reported in the phase 3 clinical trials.

That the long term side effects for this vaccine are unknown.

That after vaccination, there is a 3-4 week period of immunosuppression, where children (and adults) are susceptible to latent viral infections and other viruses.”

Thus, Malone concluded, the government should scrap mandates and vaccines for young people.

Per the establishment opinion cartel, that is a truth no one must hear.