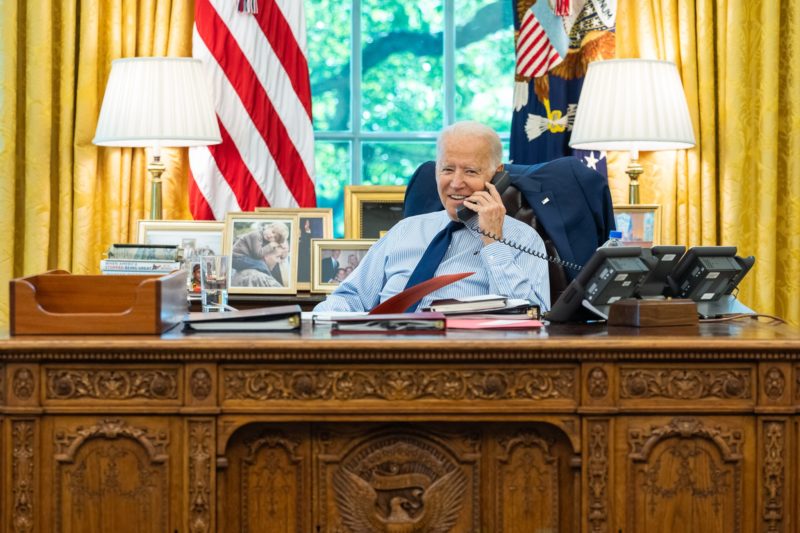 A little-noticed provision buried deep in President Biden’s January 27 executive order (EO), “Tackling the Climate Crisis at Home and Abroad, Create Jobs, and Restore Scientific Integrity Across the Federal Government,” has emerged as one of the gravest threats facing ordinary Americans, at a time when such threats are legion.

The EO’s Sec. 219 sets the goal of “protecting” at least 30% of the nation’s land and water by 2030. Under “protection” means putting this land and water (mostly land) off limits to any productive use in perpetuity. To accomplish this goal, the federal government will have to buy up – through eminent domain or other pressures on landowners making them “willing sellers” of their property – millions of acres of private land.

Adding to the Federal Estate

In other words, to save the planet from what the Biden White House and the ruling class assures us is a “climate crisis,” we need to have the government gobble up more land and have it managed by bureaucrats in Washington. The federal government already owns about 27% (640 million acres) of the nation’s land, with the bulk administered by the Bureau of Land Management (BLM) and most of the rest taken up by the National Forest Service, National Park Service, and an assortment of wildlife refuges and military bases.

A short-sighted Congress – when was it never short-sighted? – replenished the Land and Water Conservation Fund in 2020, giving the feds an annual supply of cash with which it can socialize more private land. And in February, the Biden White House struck down a Trump-era rule giving local governments a say in federal land acquisitions within their jurisdictions.

Alarmed by what promises to be the biggest land grab in American history, governors from 15 states questioned whether the Biden administration has the legal authority for its 30 by 30 plan.

“[We] are not aware of any statutory or constitutional authority for the President, the U.S. Department of Interior, the U.S. Department of Agriculture, or any other federal agency to set aside 30 percent of all land and water in the United States,” the governors wrote in an open letter to Biden. “Nowhere in the laws of our nation is the authority delegated to the President or executive branch agencies to unilaterally change the policies governing land use in America.” The governors represent states stretching from Alaska and Idaho to Tennessee and Alabama.

The governors’ open letter follows a March 16 letter to Biden by 64 members of the Congressional Western Caucus, which underscored the special situation of western states, where 90% of federally-owned land is located.

“Western states will be disproportionately impacted by policies set in place to achieve the 30 by 30 goal, which we fear will impact revenues derived from jobs derived and jobs that depend on multiple-use public lands,” the letter states. “Our lands and our waters must remain open to activities that support our rural economies and help us achieve our agriculture, timber, recreation, energy, and mineral needs.”

The reference to the threat the 30 by 30 plan poses to predominantly rural jobs is key to understanding what the White House scheme is all about. Ultimately, 30 X 30 is about what writer Ron Arnold calls “rural cleansing.” Put enough regulatory pressure on natural-resource industries so that many are forced out of business, and you will also destroy the livelihoods of the people who make their living in those industries. Eventually, enough will leave and decamp for urban areas in search of work. This is how rural cleansing works, and the people behind 30 by 30 know it. Depopulated rural areas are exactly what they want.

And if out-and-out land acquisitions don’t do the trick, they have other tricks up their sleeve. By adding a few more carefully selected species to the Endangered Species List, land-use restrictions can be imposed on a species’ habitat that can cripple rural economies. The Biden administration is also preparing to bring back Obama’s Waters of the United States (WOTUS) rule that will impose federal zoning on millions of acres of private land.

“Right now, 97% of Nebraska is privately owned, and if you wanted to set aside 30% of this in conservation, you would drive up land prices [and] make it more difficult for young people to get into production agriculture,” the Republican governor told a Daily Signal podcast (July 23). “You would certainly drive-up food prices [and] you’d drive up property taxes.”

Bonner Cohen, Ph. D. is a senior policy analyst with CFACT, where he focuses on natural resources, energy, property rights, and geopolitical developments. Articles by Dr. Cohen have appeared in The Wall Street Journal, Forbes, Investor’s Business Daily, The New York Post, The Washington Examiner, The Washington Times, The Hill, The Epoch Times, The Philadelphia Inquirer, The Atlanta Journal-Constitution, The Miami Herald, and dozens of other newspapers around the country. He has been interviewed on Fox News, Fox Business Network, CNN, NBC News, NPR, BBC, BBC Worldwide Television, N24 (German-language news network), and scores of radio stations in the U.S. and Canada. He has testified before the U.S. Senate Energy and Natural Resources Committee, the U.S. Senate Environment and Public Works Committee, the U.S. House Judiciary Committee, and the U.S. House Natural Resources Committee. Dr. Cohen has addressed conferences in the United States, United Kingdom, Germany, and Bangladesh. He has a B.A. from the University of Georgia and a Ph. D. – summa cum laude – from the University of Munich.