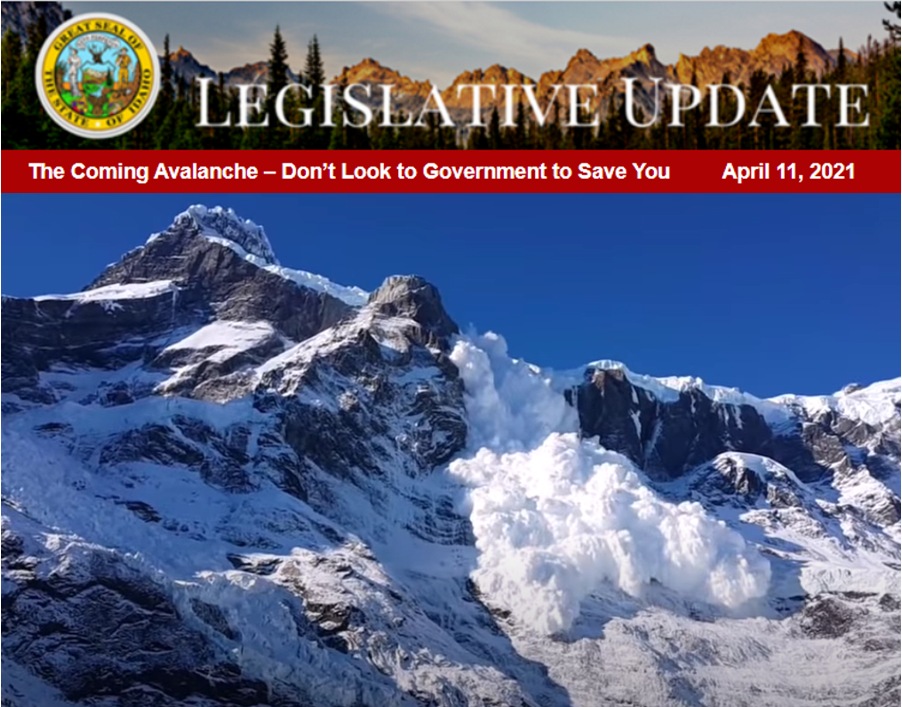 Idaho folks are generally less fearful than others around the country, but even Idaho citizens are getting jittery about whether the majority of their elected officials will step up and defend those rights and liberties we hold so dear. The overt and covert governmental and globalist assaults on our nation, state, and citizens, has been staggering, and there is good reason to be jittery. If you are depending on your elected state and local politicians/leaders to protect you, you could be making a big mistake.

I never tire of reminding citizens that elections have consequences because I am reminded every day the legislature is in session and the governor is in the Capitol!  The lack of strong Idaho-focused leadership is glaring. Unfortunately, so many of Idaho’s state legislators either turn a blind eye, or openly embrace these changes happening to our country and state. Many bills have passed, from creating committees to study illegal alien drivers’ licenses (SCR107), to funding pre-kindergarten (0-8 yrs old) critical race theory training (SB1193), but not much has passed to help protect Idaho citizens’ rights or our state sovereignty.  And now the focus has turned to spending the 5.3 billion soon-to-be hyper inflated dollars coming into Idaho to federalize our state, with no consideration for the strings attached. 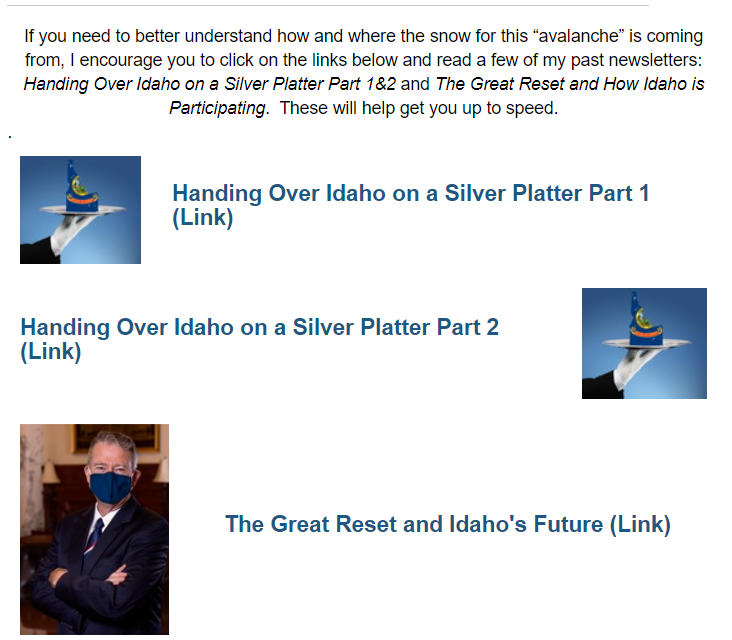 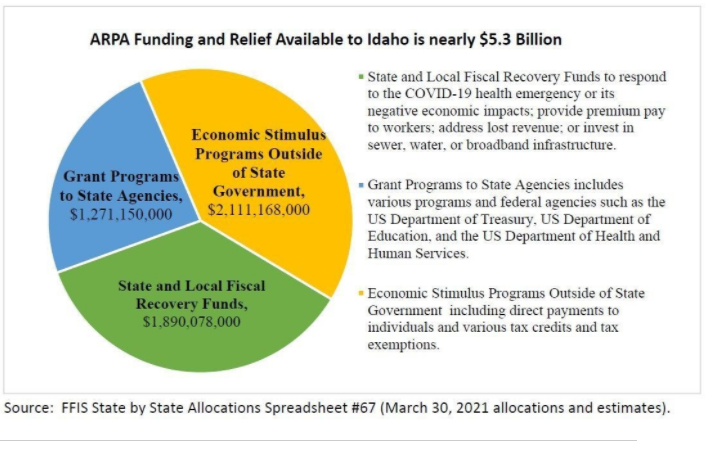 Over 5 billion dollars will likely be coming into Idaho and the legislature is not even entertaining discussions on  whether or not we should take the money with all the strings and programs attached. With this mentality, we can certainly expect bigger problems than we currently face.  Please see the write-up on this issue below by Representative Ron Nate. Rep. Nate does an excellent job of detailing the awaited woes if Idaho chooses to accept this trojan horse disguised as “disaster relief” funds.

The American Rescue Plan Act (ARPA) puts Idaho in the position to receive over $5 billion dollars in direct payments, programs, and grants.  For perspective, this is 25% more than the entire annual state general fund budget.  On its own it is foolhardy.  Given that Idaho has already received over $3 billion from CARES I and CARES II funding, the new assistance and stimulus from ARPA is downright obscene.   Many of the ARPA provisions apply to the next several years, for instance 2021 to 2025; however, some span longer time periods.

The money comes with strings.  It is tied to programs, limited for specific purposes, and requires limitations on our state’s other budget categories (like tax relief).  When Idaho, or any state, takes money from the federal government, we become slaves to the federal government.  We must behave a certain way to keep the funds, or keep the funds flowing.  We must restrict our actions in other areas.  We become dependent on the massive money transfers and we will do what the feds want to keep the money coming.  Idaho has an important decision to make.  Do we accept the money and the rules, and the loss of self-determination, or do we try to retain a modicum of sovereignty? For me, the decision is clear:  IDAHO SHOULD REJECT THE FUNDING!!

The best solution I see for the state of Idaho is engagement of the citizens in our whole governmental system-not just on a specific issue. Citizens need to understand the basics of government starting with all power is in the people. Our rights come from God, not government and government is set up to secure and protect our rights. The constitution is a social contract set up between the people and the government we created to tell government what it could do.

History has shown that as government continues to grow, it oppresses the rights of citizens, even in Idaho.   Please stop thinking government is going to fix the problems that they have created. Passing an Idaho bill to protect gun rights might help, but surely it won’t stop a federal gun confiscation program if Idaho has sealed its fate with its addiction to federal funds. There is no “perfect bill” that will ever be passed to protect our rights from an oppressive government. Oppressive governments only get replaced when people unite their power and replace the offending characters.  Citizen engagement and involvement in the election process needs to become a priority today for all Idaho citizens with the jitters.

In closing, I want to share some encouragement. I have been in Boise now for nearly four months.  Besides working to try to fix bad language in good bills, and trying to prevent bad bills from being passed, I have been networking with many citizens and groups in the area and around the state. Boise and the surrounding cities are waking up to what is happening to our state. Citizens are figuring out that their legislators’ may be leading them astray and are learning how to use the Idaho Freedom Foundation’s constitutional vote scoring index and other tools to watch and evaluate their voting records. More and more citizens are live streaming committee meetings and watching their representatives and senators be exposed on what they say vs. what they do when it comes to their constituent’s interests.  Others have learned how to follow the money and are tracking the lobby donations and watching how it affects their legislators’ voting habits.

For those of you who have been in this fight for a while, please don’t give up! More and more citizens are waking up daily. Many folks are fleeing other states and are committed to not let what has happened in their states happen here. They are getting involved and organizing to make their voices heard.  United WE WILL stand!