Despite the declining epidemiological curve, the improving COVID rates and the vaccine rollout Washington state has spent more than a month in Phase 2, and until the governor’s announcement last Thursday, had no idea when or what a next phase would look like.

Republicans in the Legislature had advocated for a Phase 3 plan much sooner. In fact, Republicans introduced their own plan a couple of weeks ago, “Open Safe, Open Now” or House Bill 1553. Our proposal focuses on a local approach as well as getting businesses open to 50% immediately. The governor is ditching his regional approach and going to a county-by-county plan and also opening businesses to 50%. It is good to see the governor using elements of our plan, especially since he dismissed our plan saying – “we’re not following the leadership of Texas.” Our plan is not a Texas-type plan. In fact, it is modeled after what the Democratic governor in Connecticut proposed. Click here for more on that plan. For more on Gov. Inslee’s plan click here.

Washington state received more good news this week as the Washington State Economic and Revenue Forecast Council released its quarterly revenue forecast. Compared to the November forecast, revenue is projected to increase by $1.34 billion for the current 2019-21 budget cycle, and by $1.95 billion for the 2021-23 budget cycle — a $3.29 billion increase over the four-year outlook. 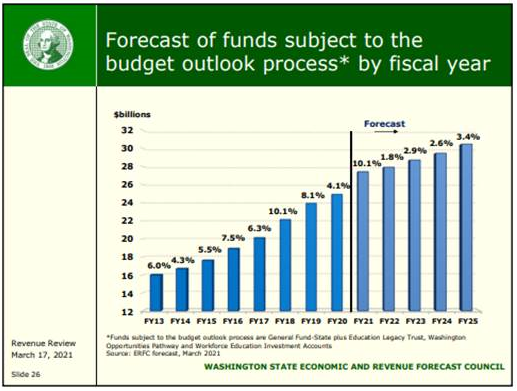 Last June, it was estimated we could be facing a $9 billion budget deficit this year. However, the last three revenue forecasts have essentially put us back at pre-pandemic revenue levels.

On top of the positive revenue forecast the latest federal stimulus package, the American Rescue Plan Act, is sending Washington state about $7.1 billion in recovery money for local, county, and state governments, in addition to about $3 billion in COVID relief for K-12 schools, higher education, and childcare.

With the $3 billion increase in the revenue forecast and the federal dollars coming in, majority Democrats need to stop looking at new or increased taxes and focus on what type of tax relief we can provide working families.

Despite the dollars coming in the majority party is still talking tax increases. On Monday, in the House Finance Committee we had a hearing on the capital gains income tax, Senate Bill 5096, which passed the Senate by one vote, 25-24, on March 6.

This tax is unnecessary, unreliable given its volatility, and likely unconstitutional. Voters have turned down income tax proposals several times over the years, and the IRS calls it an income tax. Of course, the biggest concern is this would be the first step toward a full-fledged state income tax on our taxpayers.

Majority Democrats have not given a timeline on when the capital gains income tax bill will be voted out of committee and brought to the House floor for a debate and full vote of the chamber. 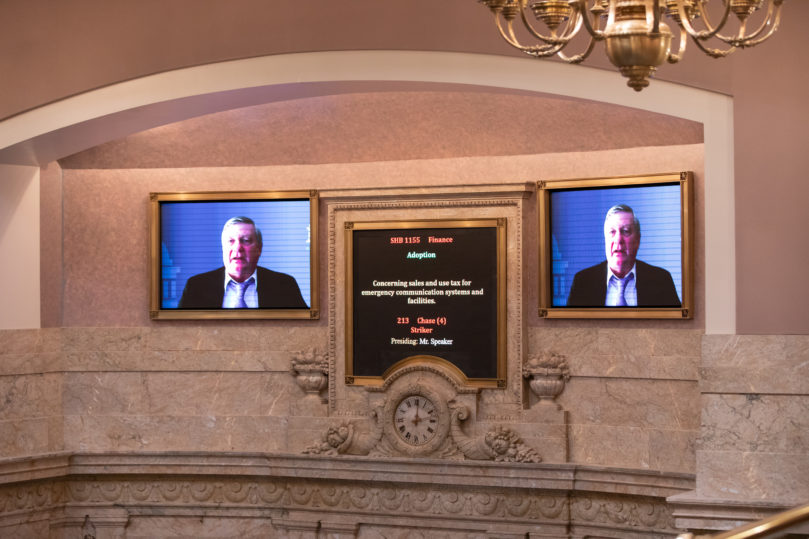 Rep. Chase gives a speech over Zoom in the House chamber during virtual floor debate.

Last week we finished up two weeks of long days of floor debate. The House sent more than 200 bills to the Senate. While most passed with strong, bipartisan support, Democrats with a 57-41 majority still passed a number of contentious bills despite bipartisan opposition. Bills that would increase how much you pay at the fuel pump, take away tools our law enforcement officers use to de-escalate situations, automatically restore felon voting rights before completed sentences, hurt business, and make it nearly impossible for rental property owners to evict bad tenants.

Good bills sent to the Senate

It wasn’t all bad, as some good, bipartisan legislation was passed including the legislation I have worked on to eliminate heavy penalties on delinquent property tax payments. Other bills include:

I appreciate those who have taken the time to contact me this session. Your input and feedback is important to me. There are a lot of high-profile issues still ahead of us to be decided – budgets, transportation packages, capital gains income tax, and much more so please do not hesitate to contact me with any questions, concerns or comments.