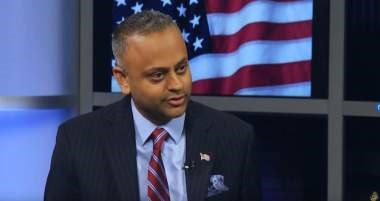 In what appears to many to be a brilliant chess move, Atilis Gym in Bellmawr, New Jersey, is now a political headquarters, thus insulating it from state interference.

Today, I am proud to announce that the owners of Atilis Gym, Ian Smith and Frank Trumbetti, have joined the Rik Mehta for U.S. Senate campaign Finance Committee. Effective immediately, our campaign will begin holding daily political rallies by those members who volunteer on our campaign at the Atilis Gym location in Bellmawr….

I stand shoulder to shoulder with Ian, Frank and all of the hardworking dedicated small business owners who just want a fair shake and I will continue to fight alongside all of them. Together, we will make New Jersey a place to live, not leave.

Included was an invitation to the gym’s customers not only to work out but to exercise their First Amendment-protected rights (freedom of speech, assembly, etc.) without government interference: “Come join us every day from now until Election Day to join our political workout fundraisers and at the same time, exercise your 1st amendment rights. Stand up in defense of our fellow citizens, our Constitution, and our great nation and together, let’s be Jersey Proud!”

After notifying the state that the gym was now an official campaign headquarters, Smith issued this statement:

Any fines levied or attempt to barricade our doors would now be political interference with an active Senate Campaign.

Rik Mehta has been one of the only political figures in NJ to show his support for the rights of small businesses. Where others have “spoken” support, Rik has shown action.

Mehta, the owner of a consulting firm and a partner at a healthcare-licensing technology firm, obtained degrees from Rutgers, the University of Arkansas, and a joint degree offered by Georgetown University and the Graduate Institute for International and Development Studies in Geneva.

The co-owners of Atilis Gym, Ian Smith and Frank Trumbetti, told Fox News that “everyone who comes in here will be a volunteer for the Mehta campaign and we’ll be here to exercise our rights” not only to work out but to support Rik Mehta in his quest to unseat Booker.

The next move is up to New Jersey Governor Phil Murphy.

New Jersey Gym Owners Expecting to Be Arrested; Barriers to Be Installed by State