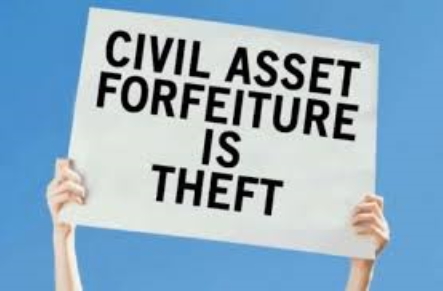 Civil asset forfeiture is the process by which government confiscates a person’s property on the mere suspicion it was involved in a crime.

We consider this legalized government theft.

In contrast to criminal forfeiture, where property is taken only after a criminal conviction, civil forfeiture allows law enforcement to take property from innocent people who have never been formally accused of a crime, let alone convicted of one.

But that’s not the end of the story, unfortunately.

“Equitable sharing” is a federal program that incentivizes state and local police to bypass state-level restrictions on asset forfeiture.

Both the Department of Justice and the Department of Treasury operate the program. Under the equitable sharing, local police seize assets they suspect were involved in criminal activity, sometimes without even making an arrest.

Through a process known as “adoption,” the feds prosecute the case under the looser federal forfeiture procedures and then return up to 80 percent of the proceeds back to the local cops. This allows police to circumvent conviction requirements and collect forfeiture funds even if the state process prohibits it.

Until recently, California faced this situation. The state has some of the strongest state-level restrictions on civil asset forfeiture in the country, but state and local police were circumventing the state process by passing cases to the feds. According to a report by the Institute for Justice, California ranked as the worst offender of all states in the country between 2000 and 2013. In other words, California law enforcement was passing off a lot of cases to the feds and collecting the loot. The state closed the loophole for a vast majority of situations in 2016.

In recent years, a growing number of states have ended civil asset forfeiture on the state level. And we’ve been pushing more to opt out of the federal program too.

Here are the latest efforts on each.

BOTH STATE AND FEDERAL

I hope you find this information interesting – and educational. I’m so thankful for the opportunity to be able to not only help people learn things – but also provide them tools they can use today to help advance liberty.

Thank you so much for being a part of this with us! We couldn’t be more grateful for your support – large or small – it all helps us make a difference:
https://tenthamendmentcenter.com/members/