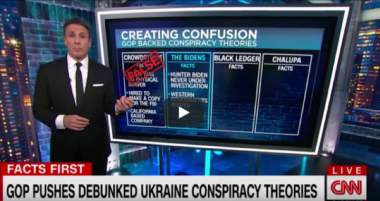 The party of debunked conspiracy theories is trying desperately to keep us from delving into the real conspiracy evidence involving Obama, Biden, the Clintons, Russia, and Ukraine.

The Democrats and their radical, anti-Trump allies in Big Media held the nation captive for the past three years while they flogged a conspiracy theory that President Donald Trump had colluded with Russian dictator Vladimir Putin. They crippled the new administration as much as they possibly could, wasting time, energy, and resources that should have gone toward fixing real problems. The American people were repeatedly promised “smoking gun” evidence proving President Trump’s guilt in the supposed Russian conspiracy. Did they deliver? Not even close. Intensive, extensive, expensive congressional investigations and media sleuthing failed to turn up anything substantive. Zero. Nada. Nothing. Trump-Russia conspiracy theory debunked.

But not to worry. The anti-Trump wolf pack assured us that a Special Counsel investigation by former FBI Director Robert Mueller and his hand-picked crew of anti-Trump, pro Hillary Deep Staters would deliver the slam-dunk proof of the Trump-Russia conspiracy. However, after a nearly 2-year intensive, extensive, expensive, one-sided “investigation,” the Mueller probe essentially turned up zilch. Zero. Nada. Nothing. Trump-Russia conspiracy theory debunked — again.

With barely a pause to wipe the copious egg off their faces, the Democrat-Big Media combine switched from their embarrassingly debunked Trump-Russia conspiracy theory to a Trump-Ukraine conspiracy theory, with House Speaker Nancy Pelosi, House Intelligence Committee Chairman Rep. Adam Schiff, and their media cohorts huffing and puffing about “smoking gun” evidence supposedly proving that Donald Trump engaged in bribery, extortion, obstruction of justice and other alleged crimes with regard to Ukraine. Thus was launched an historic impeachment spectacle. What sensational evidence has Adam Schiff’s impeachment show produced? Zilch. Zero. Nada. Nothing (except for a lot of pontificating and strained, 3rd-party hearsay). But wait! That’s not all! The Pelosi/Schiff/Fake News cabal has more to offer: not just one, but multiple Ukraine conspiracy theories, including one involving former New York mayor and President Trump’s attorney Rudy Giuliuani, and another alleged conspiracy involving Rep. Devin Nunes (R-Calif.), ranking member on the House Intelligence Committee. And still more!

Don’t Pay Any Attention to Those “Debunked Conspiracy Theories”

The same folks that have been obsessively peddling the debunked Trump-Russia/Trump-Ukraine conspiracy theories are also desperately trying to convince America not even to glance at very convincing evidence of real conspiracy involving former President Obama, former Vice President Joe Biden, and other Democrats with Ukraine. When not reproducing the Pelosi-Schiff-Biden scoffs about the Biden-Burisma conspiracy facts and the Ukraine-Crowdstrike conspiracy facts, the Fake News echo chamber — Time, Newsweek, New York Times, CNN, Washington Post, MSNBC, Associated Press, NPR, ABC, etc. — sneeringly obsesses over what it insists are ludicrous “debunked conspiracy theories” about Joe Biden, his son Hunter Biden, and Ukraine.

Below we provide a small sampling of the Big Media “debunking” deluge that is obviously aimed at frightening politicians, commentators, independent journalists, and the American public away from examining the Biden/Ukraine connection:

On and on it goes. To paraphrase Shakespeare’s Hamlet regarding phony protestations, “The Fake News doth protest too much, methinks.” Why are they so desperately trying to prevent us from lifting a lid on the Biden-Burisma can of worms?

Debunked? Let Us Examine the Evidence Before Deciding

We will not take time here to reprise the evidence of a supposedly debunked “conspiracy theory” regarding Joe Biden using his position as vice president to put his son, Hunter Biden, in a very lucrative post on the board of the corrupt Ukrainian company Burisma Holdings, or Biden’s use of his office to quash an investigation into Burisma and have the Ukrainian prosecutor fired. That story is summed up well in C. Mitchell Shaw’s article, “Seeking a Scapegoat for Biden’s Crimes,” and our other articles that we have linked to at the bottom of this story.

However, beyond the Biden-Burisma-Ukraine story there is another even more important Obama/Biden/Clinton/Deep State/Ukraine “conspiracy theory” that is far from debunked and very much in need of investigation. President Trump referenced this in his now-famous telephone call with Ukrainian President Volodymyr Zelensky when he asked Zelensky to look into CrowdStrike, the cyber security firm run by Soviet-born Russian-Ukranian Dmitri Alperovitch.

CrowdStrike and Alperovitch were hired by the Democratic National Committee (DNC) and it was CrowdStrike which came up with the claim that the DNC server had been hacked by Russia, which became the basis for the charge that this had been done to benefit Trump and harm Hillary Clinton. The details of this important story were reported by The New American in February 2018, in an article titled, “The Russia Collusion Suspect Nobody’s Talking About: CrowdStrike’s Dmitri Alperovitch.”

A full airing of the CrowdStrike/DNC/Clinton/Obama/Biden affair would expose the vast tentacles of the Deep State globalists that have captured control of so much of our government. As we noted in the above-mentioned article:

The ongoing campaign against President Trump has only remained viable because of the continuous support and connivance of Deep State operatives in the intelligence community and the major media.

This connivance was apparent from the start, when the DNC and CrowdStrike refused to allow official analysts from the FBI, CIA, NSA, and other agencies to examine the DNC server that was supposedly hacked by the Russians.

One might expect that, in response, the “rebuffed” intelligence and law-enforcement agencies would refrain from endorsing the conclusions of a report that was obviously serving a partisan political purpose and that was based on evidence that they had not seen, because it had been purposely withheld from them. But no, the politically appointed intel chiefs lined up to parrot the Clinton/DNC/CrowdStrike line that Putin had interfered in the U.S. presidential election to torpedo Hillary Clinton and aid Donald Trump.

In truth, it was (and is) Hillary Clinton who has proven to be Putin’s best ally (despite her now-expedient Russia baiting and denunciations of Putin), and Dmitri Alerpvitch may prove to be one of the Kremlin’s best agents for diverting attention away from Clinton’s treasonous activities and instead focusing global media attention and accusations on Trump.

Seeking a Scapegoat for Biden’s Crimes

Graham to Pompeo: Give Me Everything on Biden-Burisma