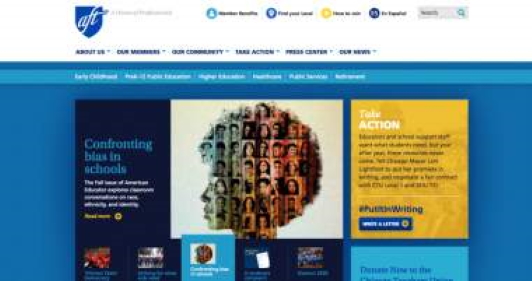 The American Federation of Teachers (AFT), the nation’s second largest teachers’ union, makes no effort to disguise its anti-Trump agenda in the fall issue of its quarterly journal, American Educator. The issue asks instructors to be mindful of both implicit and explicit bias under the Trump administration and to combat said bias with safe spaces and identity politics. In fact, the entire issue reads like a campaign to perpetuate leftist dogma in schools, as if it’s not already the predominant ideology in the public school system.

AFT President Randi Weingarten sets the stage for these themes in the issue’s opening essay, “A Defining Moment for Democracy.” There, she claims President Trump has “trampled rights enshrined in the Constitution,” “waged a war on truth,” and “fanned biases that aim to dehumanize ‘the other’ and that erode our democracy.”

“We can’t ignore Trump’s bigotry and cruelty, or the fact that his erratic behavior is intended to create chaos and confusion,” she opines.

According to Weingarten, President Trump has “stok[ed] America’s divisions in order to exploit them.”

So how should teachers combat these issues? Quite ironically, another article in the same issue of this journal suggests further dividing students based on their ethnic and racial backgrounds.

In “The Identity Project Intervention,” Deborah Rivas-Drake and Adriana J. Umaña-Taylorone suggest educators foster ethnic and racial identity development with the implementation of an Identity Project intervention program to “provide adolescents with tools and strategies that would help them learn more about their ethnic-racial background.” The entire eight-week program focuses on student ethnicity and race and the discrimination and stereotypes surrounding those identities.

In keeping with the premise that Trump’s presidency has created an unfriendly environment for non-white students, an article by Maureen Costello of the anti-Trump, anti-Christian, and anti-white Southern Poverty Law Center perpetuated the SPLC’s unfounded claims of a “surge of incidents involving racial slurs and symbols, bigotry, and the harassment of minority children in the nation’s schools.” In fact, not only were most of the incidents unproven, many were actually proven false.

The Daily Wire observes that the SPLC is not exactly a reliable resource on disseminating information pertaining to allegations of bias, given that it is currently undergoing an internal investigation following claims by both former and current employees that the organization is a “hotbed of racism and sexism.”

The issue also includes a Q&A with a Muslim teacher named Debbie Almontaser, author of Leading While Muslim: The Experiences of American Muslim Principals after 9/11. During the question/answer session, Almontaser cites several examples of her own experiences with Islamophobia, and suggests that school district policies “incorporate curricula and teaching about Islam.” She also recommends school districts connect with nonprofit organizations to provide cultural diversity training.

In “Demystifying the ‘Safe Space,’” Matthew Kay claims there is no objective “more holy” among progressive educators than creating a “safe space” in which students can be comfortable engaging in conversations about race in the classroom. In the article, Kay recalls one conversation in which students debated whether a white person had any place to speak on the Michael Brown incident and fallout in Ferguson. Kay ultimately seems to conclude that white teachers have to be especially careful venturing into conversations with non-white students about race.

Adam Sanchez encourages educators to teach a revisionist (anti-American) history of the United States in accordance with the teachings of radical Marxist historian Howard Zinn.

“We need a curriculum that surfaces the moments of solidarity, resistance, and courage that made this a more just, more inclusive society. Students often feel alienated from history and politics because they are told that great (usually white) men make history,” Sanchez writes.

The Union Highlights section takes an opportunity to use the recent mass shootings in El Paso,Texas, and Dayton, Ohio, to showcase the union’s anti-Second Amendment stance and to advance the claim that the country has become increasingly anti-minority and violent under President Trump.

Overall, the fall issue is packed with leftist dogma and pervasive, though false, claims that the United States is a democracy (not true — it is a constitutional republic) under threat by the Trump administration. And as such, according to Weingarten, teachers have a “responsibility for the next generation” to make students feel safe and cultivate a society of “engaged citizens.”

“Our public schools play a vital role in creating a more perfect union because, at its best, public education provides a ladder of opportunity, a path out of poverty, and a place where America’s great pluralism is celebrated,” she writes.

“Democracy in education has always been the foundation for providing education for democracy.”

Given the long list of leftist agenda items, when will public school teachers actually have time to do any real teaching?