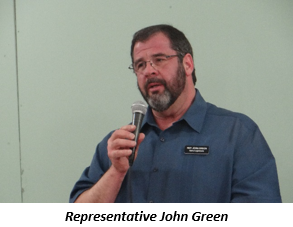 Speaking at the April 6th Jefferson Madison Day event in St. Maries, Idaho Freshman District 2 State Representative John Green reported that this first session in the Idaho legislature has been an eye-opening experience for him. He said he had very high expectations.  “There were some people that we have had in the past who were advocates for issues that were near and dear to my heart. Sen. Foreman was an advocate for pre-born Idahoans and former representative Ron Nate for so many great issues. So I thought when I got down there and I was going to team up with all those like-minded, liberty loving people who honor their oath of office. But my biggest frustration is that I found in my first session, even people with an R after their name can lean toward socialism. Just a word of caution to you, I know your current Senator and he is a socialist. He told me that to my face, not by using the word socialist, but by the policies he promotes.

“One of the most important issues that face the legislature was this notion that the government could force parents to allow a doctor or someone to stick a needle in a child’s arm and put a substance into their body that could kill them or paralyze them or cause all kinds of horrific maladies. Your Senator told me well we don’t have to tell the parents about that because it’s in their own best interests to force these kids to have these vaccinations. That kind of sealed the deal for me so I knew exactly where he stood. And unfortunately, because that’s in the Senate, it’s also prevalent in the House of Representatives.

“Socialism is rampant in our party and people who claim to be part of our party. So I started judging people based on their adherence to our party platform and have been an outspoken advocate against socialism on the floor.  I’ve also testified with regard to the Medicaid expansion, a form of socialism in one degree or another. A large part of our party supports socialism.  It’s something we have to be on watch for.

“Now that I’ve been through my first session I’ve learned a little bit about how the process works. We have some great liberty loving representatives and senators in Boise and they need help, not just from our colleagues, but from the people back home that support them. It doesn’t matter if they’re your own representative or if they’re from another district.  If they’re doing a good job, they really could use your help.” 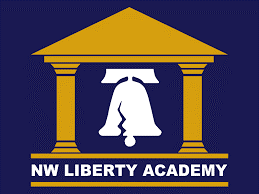 Green then mentioned the Northwest Liberty Academy, explaining that it is a great educational organization that trains high school age kids in the principles of free market economics and liberty. He said one of their catchphrases they use attributed to Benjamin Franklin is, when asked about the form of government that we would have, he answered ‘A Republic, if you can keep it.’  He stated that their aim is to help train the next generation so that we can keep our Republic or at least restore it in some areas.

June 19 through the 22nd this year in Nampa, Northwest Liberty Academy will be holding their Liberty Symposium at Northwest Nazarene University. “It’s a great program. If you know any high school age kids or even adults that would like to attend this Academy, it’s well worth the trip,” said Green.  “I’ve been teaching there for a number of years and my daughter’s attended for three or four years. It’s a great educational opportunity. You’ll be amazed at how these kids, after going through this program, will go out and teach, even adults, the principles of liberty. You have an opportunity to support them, it would be well worth your while.

“We’re almost finished now in the legislature.  We’ll have to keep a tight hold on our wallets once the legislature’s gone. We spent a lot of money this year, which is a shame. I’ll be back next year and I’ve got some more liberty strengthening legislation I’ll be supporting and I’ll be fighting the socialist every day that I’m there.”